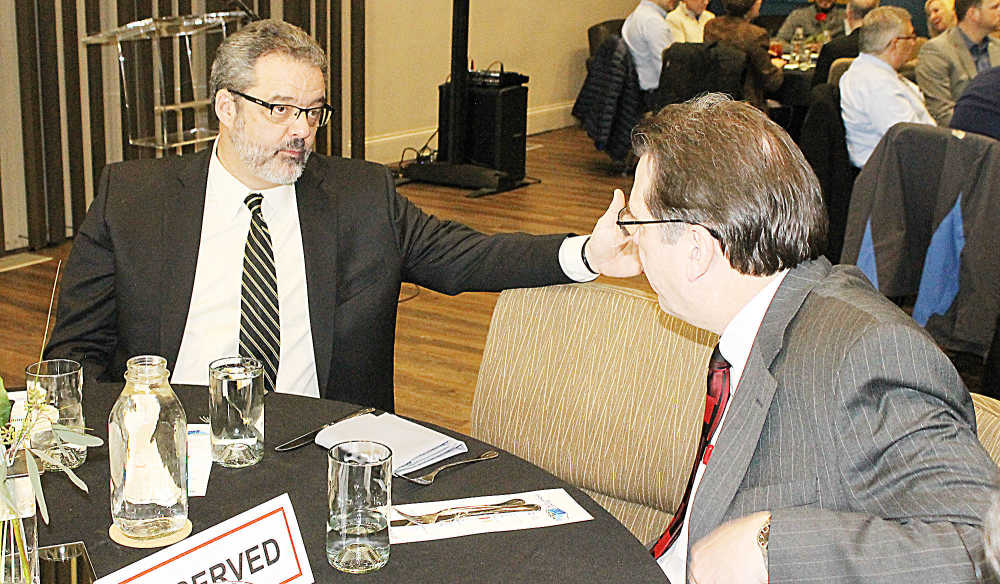 Concocted by DePauw University President Mark McCoy, the word is meant to convey the combined greatness and respect of community and university. In this case, of course, he’s talking Greencastle and DePauw.

And at the Greencastle/Putnam County Development’s annual luncheon meeting Friday at Music on the Square, there couldn’t have been a more perfect depiction of what Development Center Executive Director Kristin Clary and guest speaker McCoy shared with the 85 persons attending the event. 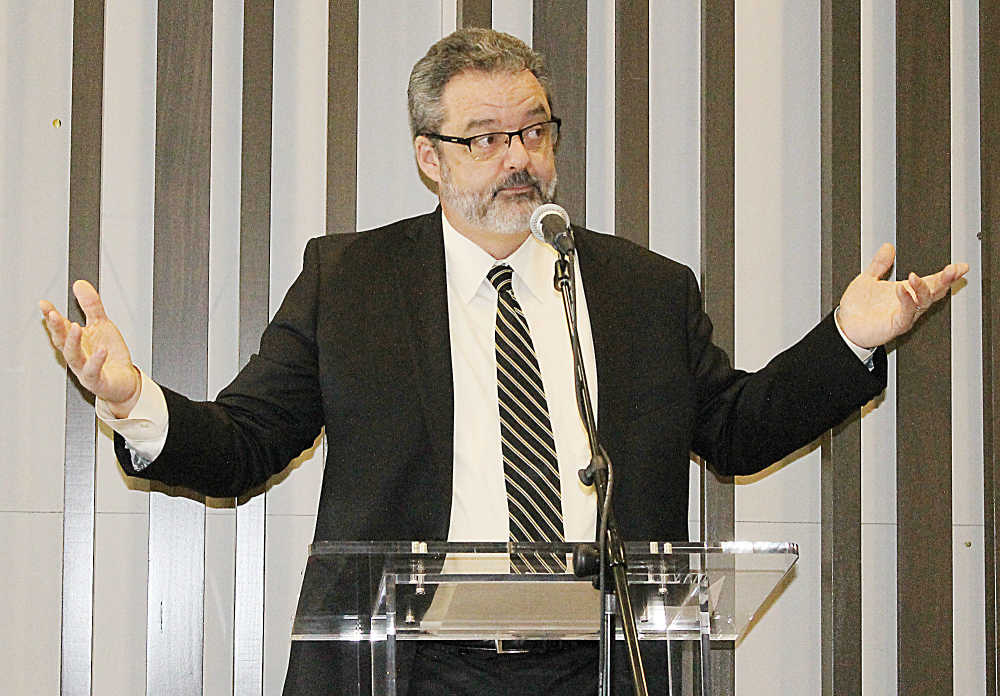 “Today is a celebration of all we’ve accomplished the last two years and we look forward to in 2018,” Clary said in opening the program.

Among the accomplishments, she said, are four local plant expansions and the requisite tax-abatement filings, along with the start-up of a Workforce Development Committee that has been “imperative because of our low unemployment rate (3.0 percent, lower than state or federal figures) and the number of jobs we have available in Putnam County.”

Looking ahead to the remainder of 2018 and beyond, Clary said the Development Center is poised to “focus on the smaller communities” of Putnam County, especially Cloverdale and its strategic location, for further economic development.

Clary also wants to see the group “spruce up” the shovel-ready sites it has available for new industry interested in Greencastle.

Meanwhile, she is encouraged by involvement in Main Street Greencastle -- even after somewhat reluctantly taking on the presidency of its board -- and is “very pleased to see the great growth in that organization.”

Encouragingly, Clary also sees the community relationship with DePauw “continuing to prosper,” detailing how Main Street, the City of Greencastle and DePauw all had a hand in the overhead lighting project on South Indiana Street that was created in time for a DePauw alumni party last year and has become a sign of downtown revival for Greencastle.

“We had alumni come back for the party night and say, ‘This is not the same Greencastle when I went to school here,’” Clary noted.

Certainly part of the reason that is true is President Mark McCoy, who began his term as DePauw’s 20th president on July 1, 2016 after moving to Greencastle in 2011 to become dean of the School of Music.

McCoy shared his creed with the group Friday, stressing, “There is no ‘them.’ There’s just ‘us,’ and the world will be so much better when we figure that out.”

It was as DPU Music School dean that McCoy told his staff “we need to do something for the community,” and the DePauw Holiday Gala was born. Organizers weren’t sure what to expect but they boldly printed 400 programs for event, raised that number to 800 as interest grew and ran out of programs 20 minutes before the start of the concert.

The inaugural event was a huge hit and the gala will see its eighth undertaking this December.

Through it, a relationship was fostered between the DePauw School of Music and the Greencastle community.

In greeting spectators as they left the gala that first night, McCoy said one of the attendees said it was the first time he’d ever attended an event on the DePauw campus.

“Oh, where do you live?” McCoy asked.

“Where in Greencastle?” he asked, only to find out the answer was Anderson Street, literally across the street from campus.

McCoy and the Music School continued to pay attention to the community, working with alumni Judson and Joyce Green to sponsor a concert series in which DePauw “truly brings the world’s greatest musicians to Greencastle,” McCoy said, reminding the group that the concerts are free to students and seniors.

Next came the violin program at Tzouanakis Intermediate School that has now expanded to the middle school, allowing all interested students to take home a violin and learn the instrument whether they could afford one or not.

“You can’t take string lessons in Greencastle, string instruments are for rich kids,” McCoy said, echoing what detractors had said early on.

He also told about the $30,000 in tax incentive grants that he hoped to sell to support the violin program but learned that the deadline on the state program was coming up prior to the gala where he hoped to marshal his primary financial support.

To beat the deadline McCoy decided he and wife Lisa would take out a personal loan to cover the amount. But when word got out about that, checks started showing up at the School of Music. He was handed a envelop stuffed with checks from people who weren’t going to let him take that on personally.

“It was like ‘It’s a Wonderful Life’ came to life right here in Greencastle,” McCoy said.

And when the Putnam County Community Foundation awarded the violin program a $16,000 grant, “it was really like the community coming full course,” McCoy praised.

“It’s been phenomenal to watch this happen,” he added, relating how the “community has rallied around this space” in regard to Music on the Square.

When the building next to it became available, it was McCoy and the Greens who again sat down and figured out how Bridges Craft Pizza and Wine Bar might complement Music on the Square and fill a restaurant void in the community.

While “bridge” is a musical term for the section between the verse and the chorus, bridge also conveys the connection between the university and community, McCoy said in explaining the origin of the restaurant’s name.

“It’s the personification of the idea there is no ‘them,’” McCoy said, adding the Bridges is in the running for a James Beard Award for excellence in cuisine, something unheard of for such a new, small-town restaurant.

He suggested that the more local residents share what places like Wasser Brewing, Almost Home, Tap 24 and Bridges have to offer, the more the community prospers.

“The more the rising tide will raise all the boats,” McCoy said.

Clary offered the proper term as she returned to the podium.

“Communiversity,” she said, “as Mark has coined it.”

Cheatham serves as president with Elsbrock as vice president.