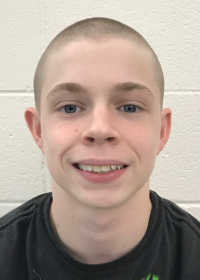 Many participants would have been frustrated to ride nearly an hour on a bus to an athletic competition, only to have the event postponed a day to require a return trip.

For South Putnam freshman Lee Haywood, such a scenario played out this week — but he didn’t mind a bit.

The IHSAA diving regional was scheduled to take place at Brownsburg High School on Tuesday, but a fire in the school laundry room forced the event to be moved back a day.

Haywood thinks that change may have reduced any nervousness he had, and he was able to finish eighth in the regional a day later to earn a spot in Saturday’s IHSAA state finals at the IUPUI Natatorium.

Haywood enters the state finals with the 18th-best regional score among the 32 qualifiers. 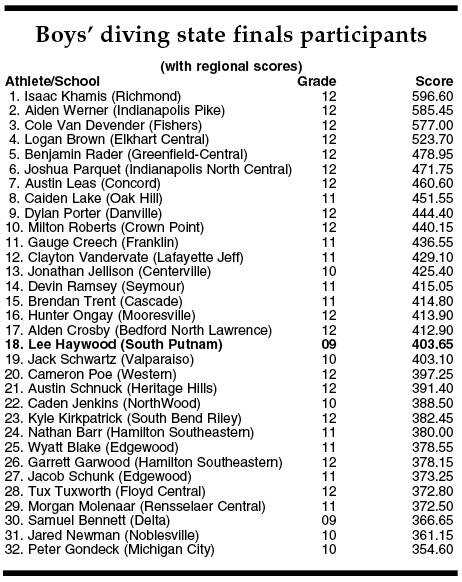 Seniors make up half of the state finals field, while nine juniors and five sophomores are also in the hunt.

Haywood is one of just two freshmen to advance this far, and his regional score was considerably better than the other ninth-grader (Delta’s Samuel Bennett).

“I felt a lot better the second day than the first day,” Haywood admitted about the regional structure. “I definitely had a lot less nerves.”

Haywood has competed long enough that he can tell when he hits the water if he is likely to get a good score or not.

He tries to guess his score before the judges make their final decision.

Making the state finals as a freshman may seem a long shot, but it has been a goal of Haywood’s.

Haywood has honed his diving techniques through a club called RipFest, based at Brownsburg and Ben Davis.

Through RipFest, Haywood has competed in the USA Diving Nationals three times.

Haywood is not a big guy, probably just a shade north of five feet tall and 100 pounds.

“The most important thing is knowing the dive and just be able to tuck or pike correctly,” Trout said. “He has the capabilities of doing all the dives really well. I think for a freshman he’s just really exceeded over and beyond a lot of divers.”

Haywood set the 11-dive school record this year, but was not able to beat the six-dive record.

He placed third in the Western Indiana Conference meet last month, and was third in the sectional earlier this month which allowed him to advance to the regional.

Haywood’s sectional score was 447.95, a much higher total than his regional number.

Trout does not claim credit for Haywood’s successes.

“He has worked and has great parents who have pushed him.”

Haywood recalls when and where he first took an interest in the sport.

“The first time I started diving was at the Greencastle city pool when I was about 10 years old,” Haywood recalled before practice on Thursday. “The lifeguards could get me to do about anything, and the first dive I did was a reverse somersault.”

He credits his success to one basic fundamental aspect common to all sports.

“A lot of practice,” he said. “The hardest part is the mental part. On doing a new dive, it’s really just going through your mind and you think you’re going to get hurt.”

The first round of diving starts at 9 a.m. on Saturday, with the top 16 divers advancing to the championship finals in the afternoon.

“He can finish in the top 16 and make the finals,” Trout said. “His scores compare pretty well to the others.”

Haywood understandably feels a little bit of nervousness, but he doesn’t think it will affect him.

Haywood’s regional score was only about two-thirds of that of the top finisher, so winning this year does not seem like a likelihood.

“I would like to win the state title someday,” he said. “And I’d like to dive in college.”

When asked if there is any certain thing he needs to work on in order to succeed on Saturday, he looked briefly and hung his head before nodding.

“I know what you’re going to say,” Haywood said to his coach. “Point my toes. I’ve been told that a bunch of times all season. I’m definitely going to point my toes on Saturday.”