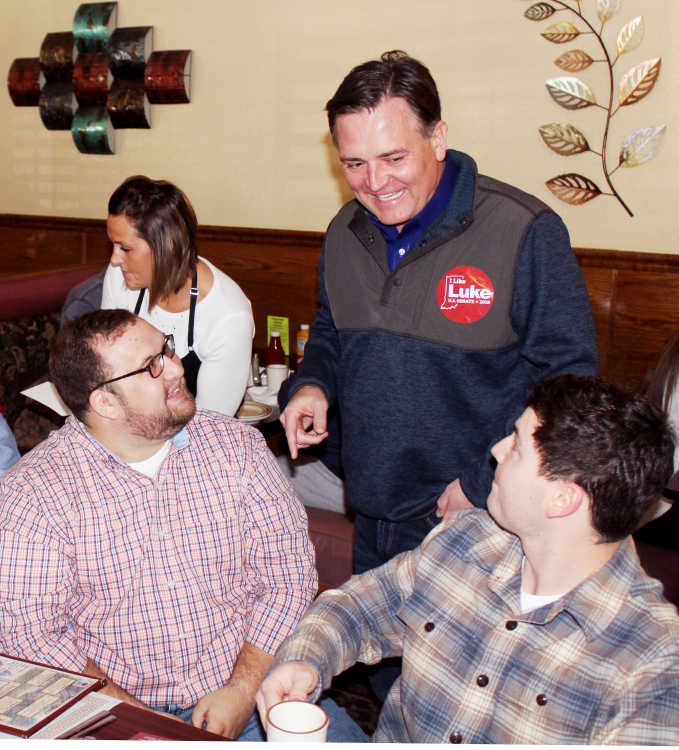 Surrounded by campaign volunteers, the majority of whom were DePauw University students, U.S. Senate candidate Luke Messer sensed the irony of all the red-and-white shirts at his table Saturday morning at The Fairway restaurant on Greencastle’s north side.

“With the momentum we have on college campuses,” Messer noted, “there’s no better symbol of that than seeing all these DePauw students here wearing red and white.”

Those colors are, of course, Wabash College colors. And something for which Messer and his fellow U.S. Senate candidates on the May 8 Republican primary ballot share an affinity. After all, the three Senate hopefuls -- Messer, Todd Rokita and Mike Braun -- are all graduates of the Crawfordsville institution. 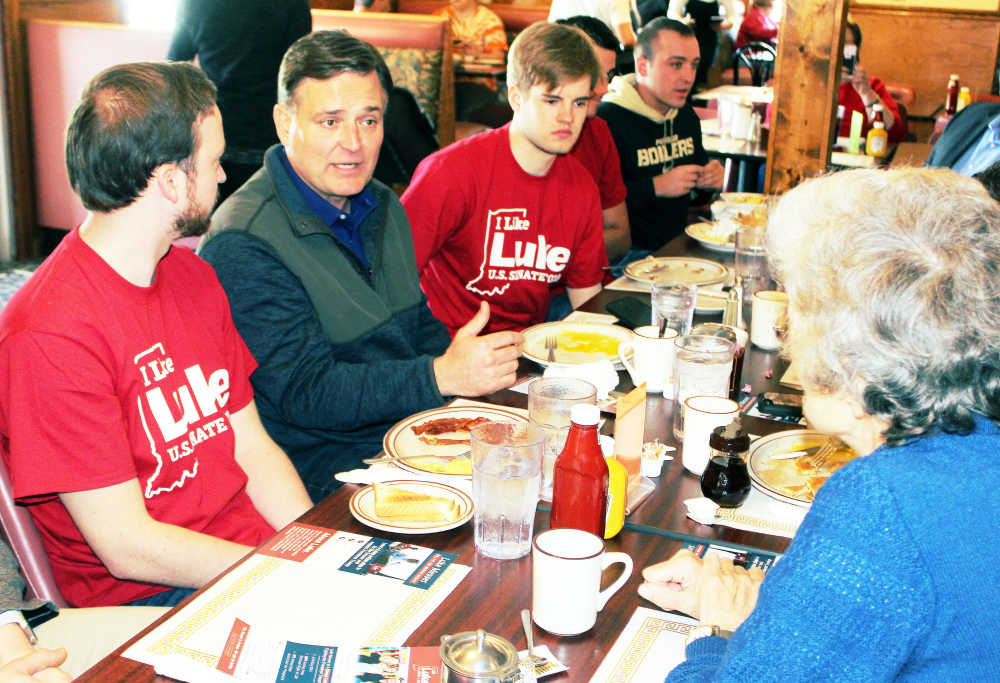 “This election is about who’s the best person to take the case to Joe Donnelly,” he said of the incumbent Democrat the GOP primary winner will face in the general election next fall.

A U.S. congressman for Indiana’s 6th District since 2013, Messer stressed that Hoosier Republicans need to nominate “an authentic conservative” if they hope to unseat Donnelly, who he says “talks like a conservative but votes with the Democrat leadership.”

He had similar assessments of his GOP opponents.

Mike Braun, Messer said, is a ”lifetime Democrat” who is now masquerading as a Republican, while Rokita, he said, “runs around the state yelling, ‘Trump! Trump! Trump!’ but when it comes time to vote, it’s ‘No!, No!, No!’”

“I am who I say I am,” Messer asserts, following a political philosophy that backs the Trump agenda in Congress, as he says in his TV commercials. “It’s pro-family, pro-life and pro-America with no apologies.”

Most Hoosiers are “excited by the programs implemented by the Trump administration,” he said.

The two biggest problems in Indiana, Messer said, are frozen paychecks and stagnant wages, resulting in a concern for the future.

And that is why Congress needs to approve the Trump administration’s America first policies, he said.

The opioid crisis is another major concern, and Messer said some strides have been made in the right direction. The highest investment ever in the fight against drugs is poised to help combat the opioid issue, he said.

“Prevention is the key,” Messer said, noting that he grew up in the “Nancy Reagan-just-say-no era” when it “wasn’t cool to do drugs.”

He shared a personal story abut battling a bad back last summer and taking pain pills, all the while wondering, “Am I an addict yet?“ each time he reached for a pill to curb the pain.

“We’ve got to help folks stay off drugs in the first place,” Messer offered, noting that by the same token “you can’t treat people and let them loose and say, ‘good luck.’”

Turning his attention to the young volunteers seated around him at The Fairway table, Messer told them, “You guys are an emerging generation in an amazing country. You just have to seize the opportunity.”

He offered those young people three pieces of advice.

He looked back at his own history when he was Decatur County Athlete of the Year for his football, baseball and basketball exploits.

“I was a 5-11 power forward in high school,” Messer said. “I might have dreamed about an NBA career but that wasn’t going to happen.”

You have to work a plan, he advised, quoting legendary basketball coach John Wooden as saying, “Yard by yard life is hard, but inch by inch life’s a cinch.”

He also told the student volunteers that they are way ahead of him in their interest in politics.

“I wasn’t even in College Republicans or working campaigns like you,” Messer said, noting that his three big interests in life back at Wabash were basketball, movies and law.

“I wasn’t even a precinct committeeman until I was 27, “ he said, adding that the point of it all is that his path “wasn’t generally the path of success, but each step along the way was important.”

Messer also advised the group they “need to fail more.”

And the final nugget of advice the congressman offered was “never quit.”

“The one consistent trait among people who are successful,” Messer said, “is persistence.”

Prior to visiting The Fairway, where he also shook hands with members of the Greencastle High School boys’ golf team having breakfast before their appearance in the Northview Invitational which they won Saturday, Messer also stopped at Jacksons’ Family Restaurant to meet the GOP precinct committeemen who were conducting their monthly meeting.