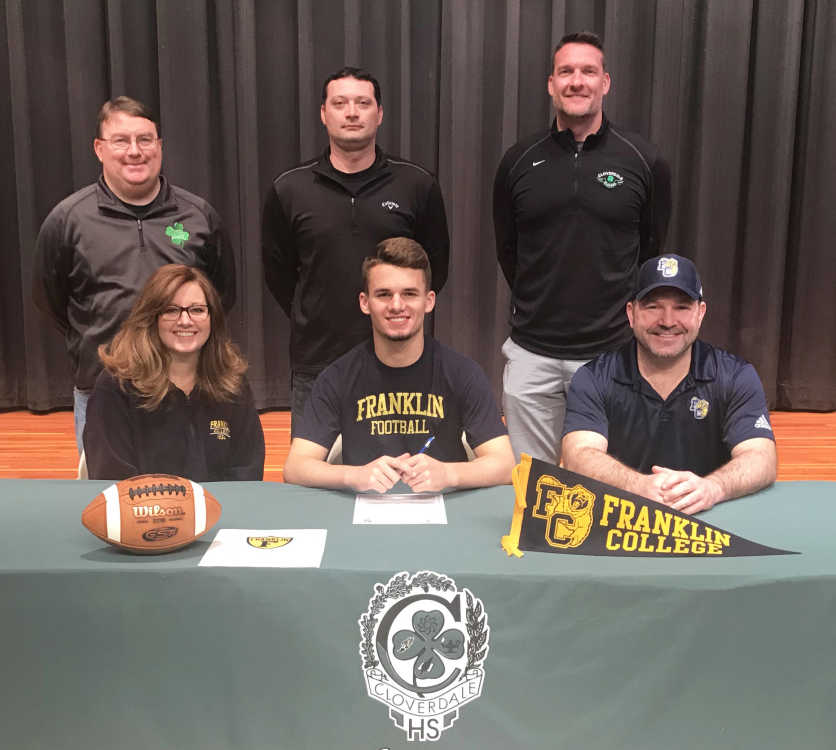 CLOVERDALE — Nick Winders was a first-team all-state linebacker for Cloverdale last fall, and will be trying a new defensive position next fall as he becomes the latest of several Putnam County athletes choosing to play collegiately at Franklin College.

Winders helped the Clovers to a 5-6 record last fall, their most successful season in many years. He led the team with 119 tackles (56 solo) and had seven tackles for loss. He also had 1.5 sacks, one interception, two pass deflections, one fumble recovery, one forced fumble and one blocked field goal.

“I’m looking forward to playing football at the next level for the Grizzlies,” Winders said. “Their coaches have helped me through this whole recruitment process, and they believe I have the skills to earn a starting safety position.”

Winders will be joining the Franklin program along with longtime teammate T.J. Hagymasi.

Last fall, the Grizzlies won their seventh Heartland Collegiate Athletic Conference title in the last eight years, going 8-3 and advancing to the Division III playoffs for the ninth time in the last 11 seasons.

“I would like to thank the Franklin coaches for this opportunity,” said Winders, who will be majoring in business marketing. “I would also like to give thanks to my family and all of the Cloverdale fans for their support.”

Coach Winders said the first word that comes to mind when discussing his son is “competitor” for his many leadership skills.

“Honestly he was like having a coach on the field,” coach Winders said. “He was a team captain, and led by example in practice and in games. Nick wanted to bring winning back to Cloverdale football, and he and his teammates did that this year.”

Coach Winders admits he will miss having Nick around this fall.

“Being the son of the head coach isn’t easy,” coach Winders added. “I had high expectations for him and he didn’t disappoint. He stepped up to the challenge. I couldn’t be more proud of Nick taking his game to the next level and playing at Franklin College.”