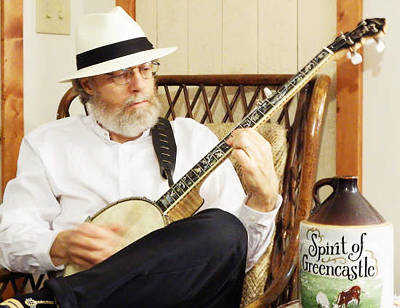 The free 7:30 p.m. concert, suitable for all ages, will be over in plenty of time to head over to Robe-Ann Park for the fireworks show, organizers assure.

The festival’s Wednesday evening programs are supported by donations from individuals, businesses including the Inn at DePauw, and an endowment at the Putnam County Community Foundation.

Claude Cymerman will perform the solo version of Gershwin’s “Rhapsody in Blue” and “The Tom and Jerry Show” by Hiromi Uehara, while Steve Snyder will perform a jazz set including selections from the Great American Songbook as well as something more recent.

Bill Wieland will read “Mark Twain on the Fourth of July,” and Mike Van Rensselaer will lead the audience in “America the Beautiful,” “Yankee Doodle,” “My Country, ‘Tis of Thee” and “This Land is Your Land.”

Folk singer Van Rensselaer ranks leading singalongs at the top of his list of what he loves to do with music. He has starred in musical comedies, performed convocations and concerts in college and high school auditoriums and gymnasiums, and played his banjo and guitar at festivals, farmers markets, coffee houses, pubs, nursing homes and other venues in seven states. Whenever he can, he persuades audiences to join him in song.

“It’s about creating a sense of community,” said the retired Greencastle Middle School teacher, who considered community in the classroom to be one of the highest priorities during his career. “The more audience members sing, the better the whole experience becomes.”

Festival founder and artistic director Eric Edberg, who recently retired from the DePauw School of Music faculty, is particularly excited about this week’s concert.

“Our motto is ‘bringing the community together with friends making music for friends.’ All this week’s performers are local residents, and there’s no better way to create and celebrate community than by singing together, so I’m thrilled Mike is joining us. Bill will do a great job sharing Mark Twain with us, and as we all know, Claude and Steve are amazing musicians in their own genres.”

Snyder is a pianist and organist who maintains an active playing schedule locally, nationally and internationally.

“Solo jazz piano is where my study started ,” Snyder said, “although I haven’t performed it for some time. I’m looking forward to returning to that genre.”

Snyder was selected as one of 66 pianists from all over the world to compete in the Martial Solal International Jazz Piano Competition in Paris, France, in October 2002. He has performed in France, Portugal, Brazil, Sweden, Taiwan, throughout the U.S. and Canada.

A native of France, pianist Cymerman, professor of music emeritus at DePauw, graduated from the Conservatoire National Supérieur de Musique in Paris with highest honors, studying with Pierre Sancan. After winning National and International Competitions, including the Grand Prize at the Marguerite Long-Jacques Thibaud contest, he studied at Indiana University with Gyorgy Sebök.

The late French President Georges Pompidou, in a special ceremony, recognized him as “Outstanding Pianist.” Cymerman performs extensively as a recitalist and chamber musician and has appeared as a soloist with the Radio France Orchestra, Orchestre des Pays de la Loire, Orchestre National d’Ile de France, Orchestre Symphonique de Limoges, the Luxembourg and San Francisco Chamber Orchestras, as well as the Indianapolis Symphony Orchestra. He is regularly invited to perform and give master classes at major festivals in France, Germany, Italy, Sweden, Japan and Israel and is a frequent guest on French National Radio and the BBC.