BAINBRIDGE -- Authorities are investigating the brutal killing of two horses in a field near Bainbridge last week, an incident that understandably still infuriates the landowner, Terry Phillips. 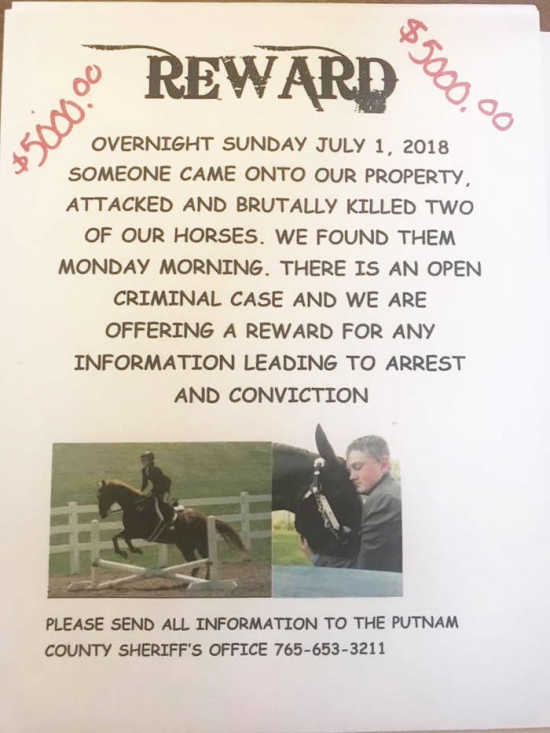 "I want people to be aware we may have somebody living among us who's a sick SOB," Phillips told the Banner Graphic after the animals were reportedly shot in the face at close range, likely sometime the night of Sunday, July 1.

Karen Phillips found the two mares dead in the field the next morning when she went out to feed them.

A criminal investigation is under way in the case but is just in its initial phase, authorities noted. However, the killings definitely were intentional and not a result of an accident, it was noted.

To help find the culprits who would shoot such defenseless animals on someone else's property, the Phillipses have established a Go Fund Me page to create a reward. The family is offering a $5,000 reward for information leading to the person or persons responsible for killing the horses -- mares Kat and Mama -- which were expected to be shown at the Putnam County Fair later this month by Ryan Phillips, 15, and Jenna VanRensselaer, 12.

The horses were taken to the Purdue University Veterinary Department, where medical examination revealed what the Phillipses had feared most.

"They confirmed they died from projectiles," Terry Phillips said, alluding to bullets or shells from a weapon for which investigators are still seeking the precise caliber.

The shooting came at close range, authorities said, with the horses having suffered fractured ribs and nasal cavities as a result of the senseless, brutal attack.

Flyers noting the reward have been posted at several locations, including Speedway and other local gas stations, Burdge Boots, TSC and Headley Hardware.

Anyone with information may contact the Putnam County Sheriff's Office at 653-3211.