BENNETT'S MINUTES: Catching up on some random odds and ends

A few tidbits from here and there as the fall sports season rapidly approaches:

• Crawfordsville football unrest — Greencastle opens its football season on August 17 with a home game against Crawfordsville, a program which has lacked recent success and has gone through some turmoil this summer.

Head coach Larry Getts was having trouble assembling a new staff, and Getts resigned on Monday to allow the program to go in a new direction.

Sean Gerold, who was an assistant coach for the Athenians last year, will be the head coach this year on an interim basis. He was the program’s head coach from 2009-2012.

Crawfordsville hasn’t had a winning record in football since 2007, and has had only three winning seasons since 1994.

The Athenians were easily the least competent team I saw last year; it would be interesting to know if there are any specific reasons behind the school’s inability to succeed in football.

All schools have their ups and down, regardless of size, but this problem seems to be much deeper than that. 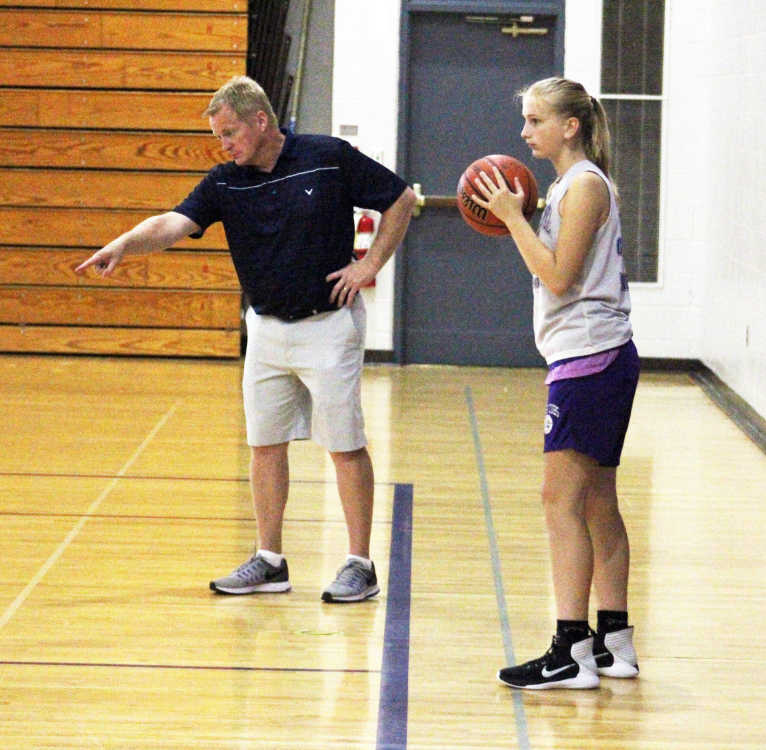 Greencastle coach Tod Windlan points out a few things to his Tiger Cubs in practice this summer.
Banner Graphic/JOEY BENNETT

Windlan first appeared on the Dan Dakich radio show on 1070-AM “The Fan,” then followed up that appearance with ones on WRTV-6, WISH-TV 8 and Fox 59.

I listened to the Dakich show, and it is clear that Windlan has strong feelings about the cloak-and-dagger mystery surrounding his dismissal.

Windlan said he is pursuing legal action against Carmel Clay Schools for the firing. Specific terms are unknown, but there is a precedent for success from earlier this summer.

Former Honeoye Central (N.Y.) football coach Mark Storm was fired as basketball coach after a similar parental uprising. According to CBS Sports, parents had written letters to the school detailing reasons he should be fired — and were successful.

• Coaching comings and goings — Besides the Crawfordsville football situation, several other coaching changes have been made involving opponents of Putnam County teams.

All 12 Western Indiana Conference football coaches are returning from last year, which isn’t surprising since there were five changes last season.

In basketball, the only changes were Brown County (boys), Greencastle (girls) and Edgewood (girls). Many rumors had indicated earlier that another WIC boys’ job, not in Putnam County, was going to open but they did not materialize.

Park Tudor guard Isaiah Moore, who hit 11 3-pointers in a 2016 game against the Clovers, was the first to make the switch.

This summer, Scecina Memorial guard Manual Brown also made the switch. Brown led the Crusaders with 20 points in a regional championship win over Cloverdale in March.

Online reports have indicated that both players live in the Warren Central school district, but left after middle school to attend the private high schools.

On the surface, that doesn’t seem to be wrong. If that’s where they live, there should be no reason for them to go to school there.

The only negative part of the equation is the scary precedent of high school “free agency,” and the very real possibility of players moving from school to school looking for the best team on which to play.

• Wilson finalist for IndyStar award — Greencastle senior-to-be Emma Wilson was a finalist for the IndyStar Sports Awards for the spring season in track and field.

The winner was Noblesville high jumper Shelby Tyler, also a junior, who won the state title in that event with a leap of 5-11. Her winning height in the sectional of 6-0 was the third best in the nation this year.

Wilson won the IndyStar award for the fall cross country season, in which she was the individual state champion.

Other finalists were Tionna Brown of Kokomo, Mikeisha Covington and Prommyse Hoosier of Warren Central, Katie Isenbarger of Zionsville, Semira Killebrew of Brebeuf Jesuit and Destiny Washington of Lake Central.