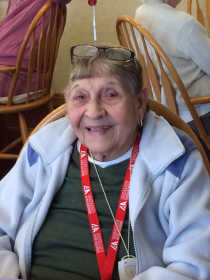 Rosa Julia Rivera of Greencastle passed away on Sunday, July 8, 2018.

Mrs. Rivera was a registered nurse until her retirement in 1992. She was a veteran of the U.S. Army, serving as a nurse, and was stationed in Osaka, Japan, Fort Sam Houston and the Presidio.

She was preceded in death by Enrique “Quico” Rivera Prats, her husband of 58 years, as well as her parents, Ricardo Ferrer Calvo and Francisca Martinez Santiago.

She touched many lives in her 96 years. Rest in peace, Mom.

Until we meet again.