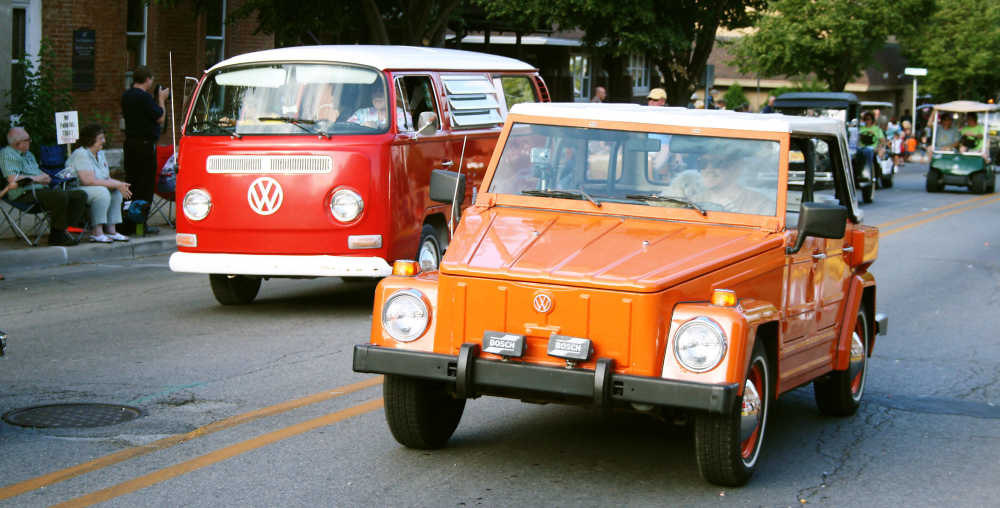 Inviting Volkswagens of all eras and models, including the Bus and “Thing,” the VW Brigade will ride again during the 2018 Putnam County Fair Parade on Friday, July 20.
Banner Graphic/Eric Bernsee

A tradition since 2001, the Volkswagen Brigade will putter along once again in this year’s 4-H Fair Parade on July 20.

Lee Creed and Dick Funk, who owns D&K Beetles on Jacob Street, are the group’s primary point men. Both are hoping for a much-needed breakthrough, as both heat and inclement weather have affected the Brigade’s numbers in the most recent fair parades.

“Our attendance has been debilitating,” Creed said.

Creed also attributed much of this to air-cooled Volkswagens becoming less prevalent.

“The older models are disappearing,” he said. “The old air-cooled are gone because the owners have moved away, gotten rid of them, or have passed.”

Creed provided that the 2006-07 parade events saw the biggest number of participants, as well as the most diversity.

“We had five vans; we had four ‘Things.’ We had everything,” he said. “The most we’ve ever gotten is about 45 cars. It was huge, but now the longtime owners are gone.”

But the Brigade has endured since a spur of the moment decision between Creed and Funk more than 17 years ago.

“I came up with the idea in 1983,” Creed explained. “It took him (Funk) 18 years to get on board with the parade when he said that it was too much of a hassle.”

From the beginning, part of the idea behind the Volkswagen Brigade has been about keeping the brand alive. Michael Wilson, a local enthusiast who works with Creed at Furniture Aware House, implied that his involvement is an example of a rising trend.

“My first Volkswagen was a 2010 diesel Jetta,” he said. “That’s where I started in being involved with the Brigade.”

Even though Wilson eventually traded in the Jetta for a 1963 Beetle, both he and Creed agreed that the water-cooled Volkswagens, from the ‘80s Golfs to the New Beetle, have to be included. Indeed, Creed said that they have now become essential to the Brigade’s involvement in the parade and beyond.

“We need Volkswagens, no matter how old they are, what they look like, in what condition,” he said.“It’s about exposure to the kids, to future owners. A lot of these kids have grown up and gotten modern Volkswagens.”

Along with inviting in this subset of the VW culture, the experience of those participating in the parade has improved. This will be the fifth year that Creed, Wilson and other Brigade supporters have organized a post-parade barbecue dinner at Funk’s shop.

“It has helped us, because it lets us talk and get to know each other personally,” Wilson said.

“Real people have a little bit of fun once a year, that’s all it is,” Creed added.

Those connections have influenced how the Brigade has been able to reach other VW enthusiasts. Members of the Indianapolis-based Circle City Volkswagen Club have attended recent parades, and Wilson keeps in contact through social media.

“Word of mouth between Volkswagen owners, as far as going to a VW event, is huge,” Wilson said. Wilson pointed to a Volkswagen show held every August in Spencer as proof that it is possible to mobilize.

When asked what it would take to reverse the downward trend in participation, local publicity was the key. However, both emphasized that the nostalgia will inspire some to keep these cars on the road. The Brigade is a visible part of that. There is a sort of “It” factor for both the participants as well as the spectators.

“I call it a rolling car show,” Wilson said.

It’s about keeping the memory of the cars alive,” Creed added.

The point of the Brigade’s participation in the parade still has been for the kids.

“They love it,” Wilson said. “You can tell by their reaction.”

Creed added that the Brigade has also made an impression on them.

“A lot of them have been here for the parade but never lived here or moved away,” he said. “The enthusiasm has carried over through time and distance.”

For the adults watching the parade, the Volkswagen Brigade brings back memories.

The Brigade will meet at the Greencastle Middle School parking lot at 5:30 p.m., and will then roll onto the parade route when ready. Everyone is then welcome to the barbecue dinner at D&K Beetles after the parade.

For more information, persons may contact Funk at D&K Beetles at 653-3466, and also at blackvwgreencastle@yahoo.com.