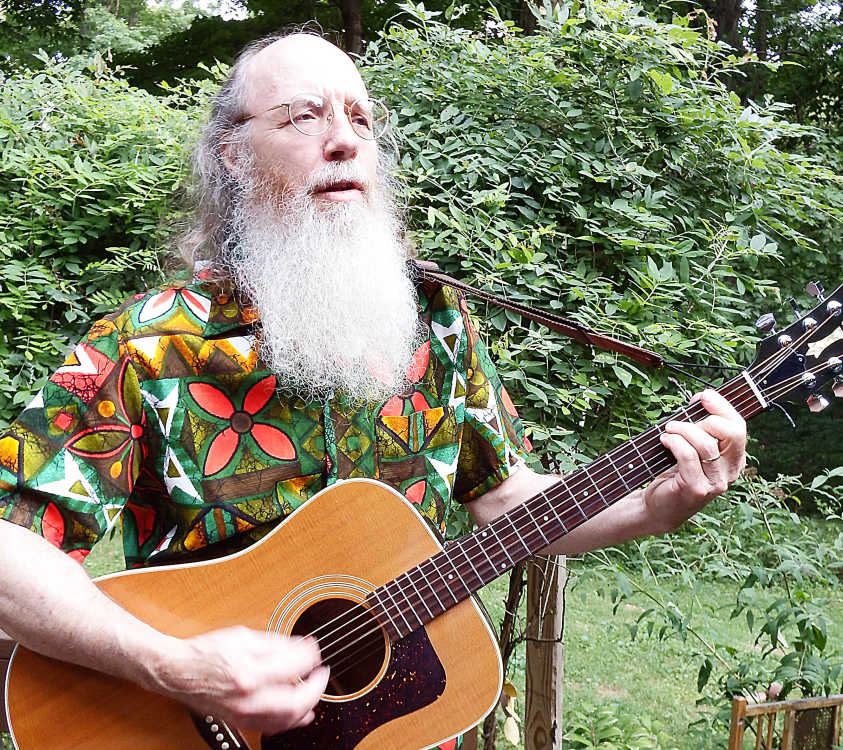 The very first ParkFest performer back in 1994 (then performing as a duo with stepson Steve Terry), Mike Van Rensselaer has played in each of the 25 seasons of the annual concert series. He’ll be back on stage (for the second time in 2018) for the season finale at 6:30 p.m. Tuesday in the new Robe-Ann Park Bandshell.
Courtesy photo

The 25th anniversary season of ParkFest has perhaps been the wildest and strangest yet, with construction delays and inclement weather shuttling shows between three venues and postponing concerts more than once.

It is appropriate then, if not convenient, that the final ParkFest, set to take place under the completed roof at the Robe-Ann Park Bandshell, still has dark clouds hanging over it.

Even with a chance of rain and storms Tuesday evening, organizers from the Greencastle Civic League are pressing forward with a blowout all-star 25th anniverary season finale from 6:30-8:30 Tuesday at the new bandshell.

Back by popular demand, the celebration will feature bounce houses, snow cones, popcorn and food from The Fluttering Duck, Wasser Brewery and Depauw University.

Additionally, many more former ParkFest performers and bands will grace the new bandshell stage at the end of the night to sing together.

Civic League members also thought it would be a good idea to amp up the fun even more by hosting Christmas in July at this final 2018 concert. This is an opportunity to clean out closets and bring wrapping paper, gift boxes, bows and other extra supplies. All donations will be used to benefit the Civic League’s annual holiday gift wrapping fundraiser this winter.

Black Market Vinyl has been getting crowds hooting and hollering on their feet with original music that features Delta blues, New Orleans swing, and gospel revival. This rockabilly band is looking to set the ParkFest stage ablaze with rip roaring rhythms.

ParkFest favorite War Radio is a local band that features flavors of rock and soul knows how to celebrate small towns like Greencastle.

Additionally, band member LaToshia Everson has been at the heart of ParkFest for several years, as well as a key contributor to the planning of the new bandshell. 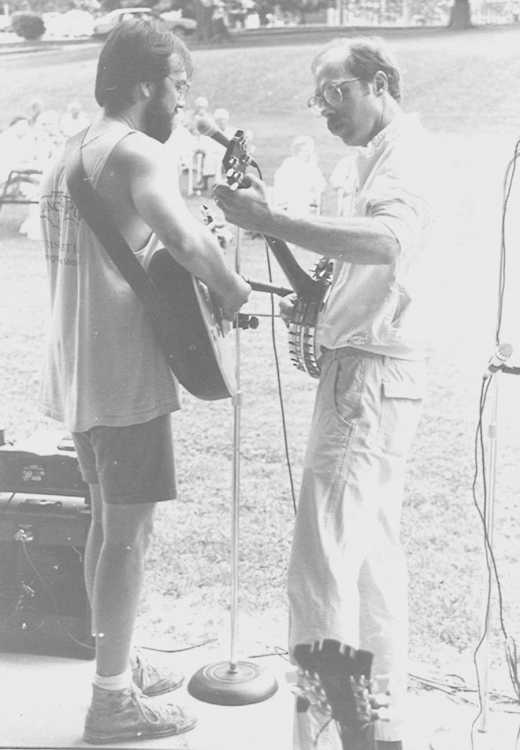 Steve Terry (left) and Mike Van Rensselaer warm up before the very first ParkFest concert back in the summer of 1994. Now a solo act, Van Rensselaer will play the 25th season final of ParkFest Tuesday at Robe-Ann Park.
Banner Graphic/ERIC BERNSEE

Opening All-Star Night on Tuesday is Mike Van Rensselaer, a loyal ParkFest performer who has been with the series since the very beginning.

From 1994 to 2012, Van Rensselaer wooed ParkFest crowds alongside his stepson, Steve Terry. And he’s continued on solo since then. He and wife Pam claim three children, seven grandchildren and two great-grandchildren.

In honor of ParkFest’s 25th anniversary, the Civic League asked Van Rensselaer to share a few thoughts about his time performing for the Putnam County community.

Greencastle Civic League: Celebrating its 25th year, the ParkFest summer concert series has an amazing history. And you have been a part of it since the beginning. What has your own history as a musician been like?

Mike Van Rensselaer: Steve and I played 18 ParkFests until he retired from performing following our 2012 concert. Since then my performances have been solo.

We were the first group to perform at ParkFest back in 1994. When Cathy Jones asked me back then if we would volunteer our services, I readily agreed, for the same reason that we would like to play this year, and for the same reason the Civic League organized the concert series: to provide a community service.

When Joanne Haymaker took over the organizing we still played on a free basis until after several years of her tenure, when checks began to be cut to help defray expenses. We didn’t do it for the money, and we weren’t trying to promote our musical careers. We played for the residents of Greencastle who showed up for our performances, and we always kept the idea of a small town community event in the forefront of our thinking as we arranged our concerts.

It’s not just the music. If you haven’t been to one of our performances, then you haven’t experienced the impromptu communication that transpires between those in the audience and us. This is a community event, where people participate.

We always have at least a half-hour of conversation after our performances, as folks come up to talk about the songs and stories, to add things we didn’t know, or to request songs for next year.

GCL: The audience always enjoys watching you invite kids to sing along with you. Why do you make it a point to get the children who attend ParkFest involved in your performances?

MVR: Most importantly, ParkFest is a family event. What more family is there than children?

I think this also goes back to my teaching and desire to be involved with children for my life’s work. Since I retired in 2012 I have returned to both elementary and college classrooms a few times a year, using music to teach American history.

Back when I was teaching every day, the best days in my classroom came when everybody was learning together, about ourselves, about each other, about our world, even about some math. It was an “us” thing. Still is.

GCL: What has ParkFest taught you about this community?

MVR: First, ParkFest has taught me that there is a wealth of musical talent in this community and surrounding area. This talent has covered a lot of ground over the years, from rock and roll to classical to country to jazz to folk to blues to barbershop quartet to genres otherwise defined. There has been something for everybody.

Second, I have learned that a determined group of women bent on providing community service can be most effective in doing just that, with a concert series that promotes local talent and brings the community together with a fun, family-friendly event.

Third, the way that our community has embraced this series with its support and attendance has given me another reason, among many, to be happy with my decision to live my life here.