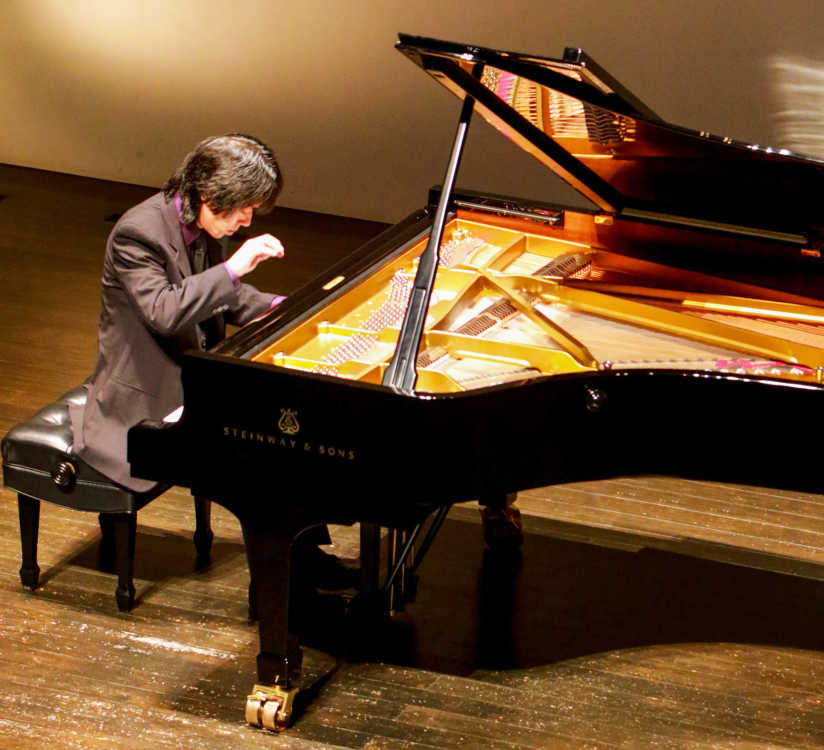 Taka Kigawa, the “phenomenon” whose work has been named one of the concerts of the year by The New York Times, returns to the Greencastle Summer Music Festival this week with an all-Debussy program.

There is no admission charge for the 7:30 p.m. Wednesday concert in the sanctuary of Gobin Memorial United Methodist Church. The festival is funded by donations from individuals, the Inn at DePauw (the festival’s main corporate sponsor) and other businesses, and an endowment at the Putnam County Community Foundation.

Kigawa’s appearance this week is sponsored by Eric Edberg and Jiawei Fang.

“Taka has been here so often that he is practically a part of the community,” Edberg, the festival’s artistic director, said. “He’s even brought his wife with him for this trip. There’s no question that he is a ‘friend making music for friends.’ I know so many people are excited to have both of them with us this week.”

About the program, Kigawa explains, “Since this year is Claude Debussy’s centennial anniversary year for his passing, I thought it would be appropriate and wonderful to do an all-Debussy program, including his earlier work (“Estampes”), matured work (“Preludes”) and future-foreseeing work (“Etudes”).

“And this is my six-years-in-a-row appearance at Greencastle Summer Music Festival. So far, I’ve performed quite a few numbers of pieces by many great composers, such as music of Bach, Chopin, Debussy, Carter, Boulez, Messiaen, Ligeti, etc., etc. This time I feel very honored to be able to do all-Debussy program there, with the wonderful Petrov concert grand piano in that marvelous acoustic of Gobin Church.”

Critically acclaimed pianist Kigawa has earned outstanding international recognition as a recitalist, soloist and chamber music artist since winning first prize in the prestigious 1990 Japan Music Foundation Piano Competition in Tokyo, and the Diploma Prize at the 1998 Concurs Internacional Maria Canals De Barcelona in Spain, with such accolades from The New York Times as “Phenomenon. There’s no denying that he is something special,” “The extraordinary pianist,” and from The New Yorker “Unbelievably challenging program. Kigawa is an artist of stature,” and from La Nacíon (Buenos Aires) “Taka Kigawa is a stupendous virtuoso.”

His New York City recital in 2010 was chosen as one of the best concerts of the year by The New York Times. Also his New York City recital in August 2011 was picked as one of the most notable concerts in the first half of the 2011-12 season by Musical America. He has performed extensively as a recitalist and soloist in New York, Washington, D.C., Boston, Cleveland, Paris, Milan and Barcelona, with appearances in Weill Recital Hall at Carnegie Hall, Alice Tully Hall, Kosciuszko Foundation, Severance Hall in Cleveland, Cité de la Musique, and Salle Gaveau in Paris, Plau de la Música Catalana in Barcelona and Teatro Colón in Buenos Aires.

He frequently tours in his native Japan, appearing in Tokyo, Osaka, Nagano and Kyoto, both as a recitalist and a soloist with orchestra and in chamber music groups. He has performed with such distinguished institution as the Cleveland Orchestra. He has been a featured artist on many television and radio networks throughout the U.S., Europe and Asia. His repertoire is extremely large and varied, ranging from the baroque to avant-garde compositions of today. He has collaborated closely with such renowned musicians as Pierre Boulez, Myung-Whun Chung and Jonathan Nott.

Kigawa grew up in Nagano, Japan, where he began piano studies at the age of three, winning his first competition at the age of seven. He received his Bachelor of Arts degree from Shinsyu University, and his Master of Arts degree from Tokyo Gakugei (Liberal Arts) University, graduating with honors in piano performance. During both his undergraduate and graduate years, he also studied composition and conducting, receiving high honors in both disciplines. He furthered his studies in the United States at The Juilliard School in New York, where he earned his master of music degree.