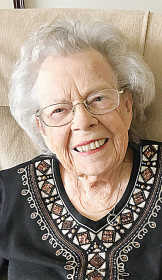 Rose Louise Peck, 91, passed away at Village of Avon on Saturday, July 21, 2018 surrounded by her family.

She was born in Troy, Ind., and was a longtime member of St. Susanna Catholic Church, Plainfield, and later St. Paul the Apostle Church in Greencastle.

She was preceded in death by her husband of 59 years, Roger D. Peck, and her daughter, Susanne M. Peck.

She graduated from Wiley High School in 1944 and received both a bachelor's degree and a master's degree in home economics from Indiana State University in Terre Haute.

She taught in the Vigo County schools and was a member of the Home Economists Guild of Indianapolis.

Upon retirement she and her husband Roger moved to Sun City Center, Fla., and then returned to Indiana, settling in Avon to enjoy spending time with their grandchildren. They also made two trips to Europe to visit their grandchildren while they lived in Belgium.

A Catholic mass and memorial service will be held in the future with Christian burial in Calvary Cemetery in Terre Haute.

Memorial contributions may be sent to the Carmelite Monastery, 59 Allendale, Terre Haute, IN 47802.