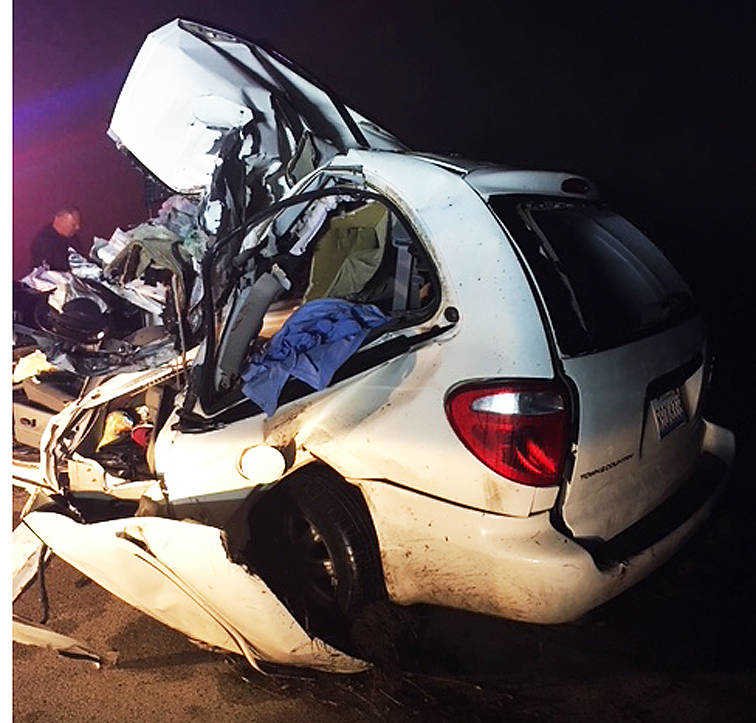 Four passengers in a 2009 Chrysler van were injured, including one critically, while the driver, Shane Oakley, 43, Greenup, Ill., was killed when the vehicle struck the rear of a semi on eastbound Interstate 70 Friday night.
State Police photo

LITTLE POINT -- The driver of a van was killed and four of his passengers injured Friday night when the eastbound vehicle struck the rear of a semi tractor-trailer on Interstate 70 near the 55-mile marker.

Preliminary investigation revealed a white passenger van with five occupants was eastbound on I-70 in northwestern Morgan County when it failed to slow or maneuver around a slow-moving or nearly stopped Freightliner tractor-tractor pulling a box trailer.

The driver of the 2009 Chrysler van, Shane Oakley, 43, of Greenup, Ill., veered to the right, attempting to avoid the semi and impacted the right rear of the box trailer.

Four passengers in the van, the victim’s wife, Tonya W. Oakley, 42; their daughters, Shaina Oakley, 21, and Jazzmin Oakley, 16, and fellow passenger Hayden Kanizer, 19, were taken to Methodist Hospital in Indianapolis.

Kanizer was airlifted and was believed to be in critical condition from head and neck injuries, State Police reported.

The three Oakley women were treated for minor injuries.

The driver of the tractor-trailer, Sukhkaran S. Sidhu, 28, of Ontario, Canada, and his male co-driver were uninjured in the accident.

Sidhu was operating a 2019 Freightliner tractor, pulling a box trailer loaded with auto parts for Allstate Freight Systems of Ontario.

Eastbound traffic was reportedly slowing or stopping for a disabled tractor-trailer near the 57-mile marker of I-70.

The investigation is ongoing and nothing else will be released at this time, authorities said. Routine toxicology results are pending.

The accident closed the eastbound lanes of I-70 until after midnight with traffic being rerouted over U.S. 231 to U.S. 40.