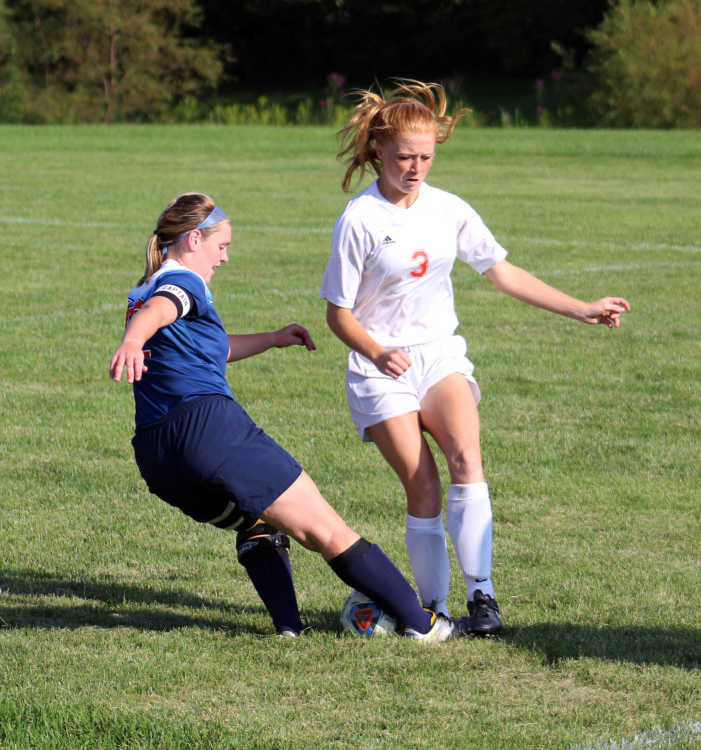 BAINBRIDGE —The North Putnam Lady Cougars made it four in a row on Thursday evening with a hard-fought win at home 4-2 against the Mounties of Southmont.

Grace Fry, Sophia Lotzow and Kylee McCullough continued their streak of scoring goals with one each. Freshman Annabelle Gross also found the back of the net for the first time this season.

“The girls played as a team and worked hard until the very end,” coach James Hilton said. “I am very proud of their effort so far this season.” 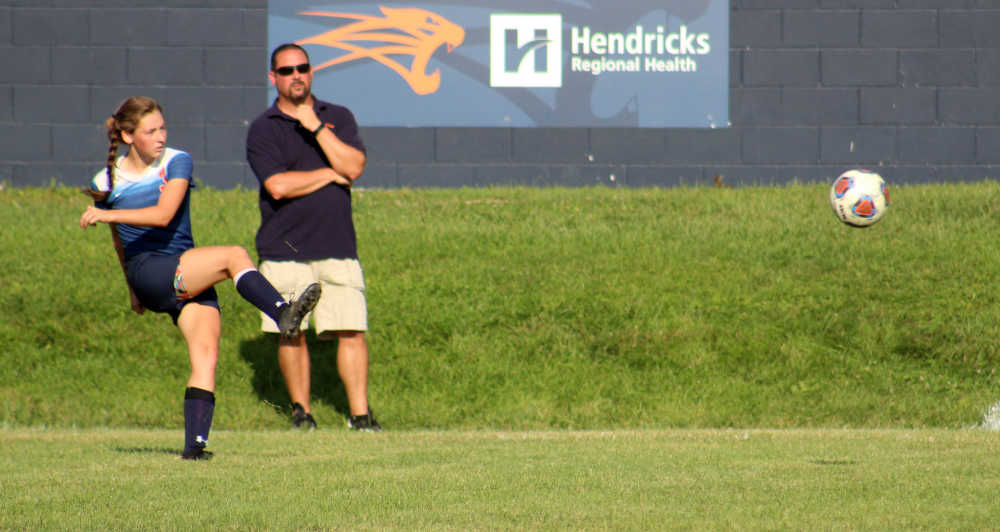 • North Putnam 2, Monrovia 1 (boys) — The Cougars picked up their second straight win in defeating the Bulldogs.

Elliot Sabens and Ashton Shaw scored goals for the Cougars.

“It was tough to go on the road to play a gritty Monrovia team and pull out a win,” North coach Kyle Morgan said. “I couldn’t be prouder. We’re seeing great results, and the hard work is paying off.”

• Eagles third in triangular — South Putnam’s Lady Eagles had another good score with a 215, but were edged by Brown County (208) and Monrovia (209).

“This made our second night in a row shooting under our team average,” South coach Cassie Lehmann said. “Alex Steffy shot her personal best this season at a 59, making this her first match that she shot under 60. Alex has really been improving on her swing and stepping up to fill the No. 4 slot these last few matches.”

Drew Steffy led the Eagles with a 50, while Leighla Hazlett and Kate McCammack each had a 53 and Kortnee Starks had a 63.

• North third in triangular — Danville and Monrovia posted the top two scores in a triangular meet with North Putnam on Thursday.

“The Lady Cougars are looking for more consistency in their scores and a better mental plan to keep them focused on what needs to be done on the course to help them get back to a game plan for success,” North coach Linda Patrick said.

Nyiah Goff showed a much improved score with a 50, Patrick said, which was a drop of 13 from her last meet.

“Better putting contributed to this drop,” Patrick said. “Haylee Greene carded a 56, a little above her last three rounds in the low 50s. Brittany Bonifacius still is struggling to stay below 60.”

Abby Simmerman brought in a 62, while Grace Timm shot a 66.

“The Lady Cougars have limited time to try to figure out what they each need to do to improve their game at the WIC meet on Saturday,” Patrick said.

• South Putnam 4, West Vigo 1 — On Tuesday, the Eagles hosted the Vikings and won both doubles matches and two of the three singles matches.

“Once again I am so proud of how our varsity and JV performed,” South coach Johnny Briones said. “No. 1 singles and both doubles won in straight sets to seal the conference win. Garrett Heavin (No. 2 singles), despite feeling a little under the weather, toughed it out and won.”

Ty VanSickle lost his match at No. 2 singles in three sets.

“I am extremely proud of Ty and how he played aggressively he was playing to win each point,” Briones said.

• Eagles win WIC West title — South Putnam hosted Northview on Wednesday knowing that a win would give them the WIC West Division title, and the Eagles pulled out a 3-2 victory.

“That played on our nerves to start the night,” South coach Johnny Briones said. “Thomas Fanning made quick work of his opponent. Two doubles worked hard and finished off their opponent in two sets.”

Briones thought his No. 1 doubles team of Austin Arnold and Tanner Pistelli played against the best duo it has played all season.

“They pulled it together to take the third set and seal first place in the division,” Briones said. “I am proud of two and three singles fighting to the end.”

• Parke Heritage 5, Greencastle 0 — The Wolves won each match in straight sets to defeat the Tiger Cubs.

Greencastle fell to 2-3 on the season and will play in the Brown County Invitational on Saturday.

• Eagles run at Zionsville — South Putnam made its season debut on Saturday at the Zionsville Invitational.

“With it being early in the season, this was a fun way to test current fitness levels,” Welti said. “Overall, the SP runners had a good experience at this large and unique meet.”

Welti noted the highlight performances came from seniors Austin Rumley and Samara Young, who each finished in the top 30 of their races against much larger schools.

“With strong starts and mental perseverance in the middle, Austin and Samara each successfully battle tough competition and led the boys’ and girls’ teams in finishing time and place,” he said, noting that other standout performances came from freshman Eli Smith and sophomore Brent Wiggins.

“Eli had a solid start to his race and smoothly rolled along with a good pack the entire time,” Welti said. “Brent did a great job of steadily moving up and passing people throughout the course of the race, especially over the last kilometer.”

No team scores were kept since Cloverdale had only four runners.

“The team did a nice job of holding Sullivan to very few points per rotation,” GHS coach Maggie Walters said. “Setters Jalyn Duff and Anna Zellers ran a smart game by spreading the ball to all six hitters.”

Lilly Meyer led the offensive attack with 17 kills, while Allison Stevens had 15,and Jada Amis and Macy Clark each added eight.

“Defensively, the girls did a nice job of frustrating Sullivan’s strong hitters by setting a solid block,” Walters said. “This allowed Greencastle’s libero, Mckenzie Woodall, to pick up aggressive swings [she recorded 20 digs on the night].”

Jalyn Duff also had 21 digs, and Meyer added 14. The team plays in the Brown County Invitational on Saturday.

“It was obvious that we came ready to play,” South coach Rachelle Custis said. “ The girls stepped onto the court with confidence and attacked the ball offensively. Defensively we read their hitters well and positioned ourselves to make solid digs. We worked well as a team and played with intensity.”

“Although we were unable to get the win, the girls are working hard and improving every day,” Custis said. “It’s a learning process.”

“I’m very proud of the way the girls preserved through tough moments during our first conference match,” South coach Rachelle Custis said. “In the first set we were down by 10 at one point, but we came back and won. The second set we had an injury and had to change up our lineup.

“The team came together and played through it,” she added. “We fought hard for every point. Back-to-back wins have made this a great week for South Putnam volleyball.”

“The JV girls never gave up,” coach Custis said. “They fought hard, encouraged one another, and were able to make some key plays to take the win.”

• Cloverdale 3, West Vigo 0 — The Clovers welcomed the Vikings of West Vigo for a Thursday night non-conference matchup and swept all three games to stay undefeated on the season.

West Vigo and Cloverdale started in a back- and-forth affair through the first 15 points of the match, with Cloverdale holding on to an 8-7 lead and Kenzie Stoltz heading back to the service line.

With Stoltz’s tough “jump serve,” followed by the precision of Hailey Thomas, the Clovers created separation at 19-11.

Senior Tori Combs tallied six of her 11 kills in the first set as the Clovers won 25-14.

The second set of the evening saw the Clovers race out to an 11-4 lead, with the Vikings getting as close at 22-16.

Set three was the same story as the first with the two teams in green working to an 11-11 draw.

“The Clovers kicked their serve-receive in gear and forced the Vikings to side out on the first serve in all but one rotation the rest of the way out,” coach Sam Jones said. “Scrappy defensive plays and some well-placed out-of-system offense fueled the run as the Clovers took the set and the match 25-16.

“Once we took a few of their shots and started to figure out their hitters, I thought our defense made some nice adjustments,” Jones said. “We nearly had three girls in double digit kills, and that’s the balance we need going into this weekend’s tournament at Scottsburg.

“I also thought our tough serving set the tone for the match,” Jones added. “We didn’t have a ton of aces, but we forced them into being out of system quite a bit. Kudos to the girls on that.”