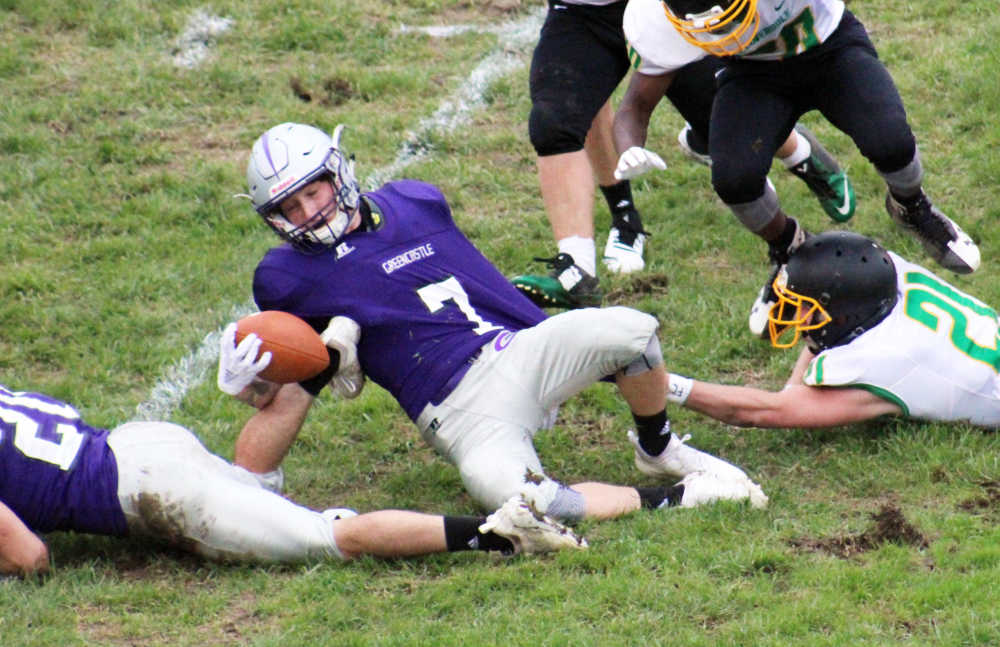 The way Greencastle came out of the gates on Friday night with 14 first-quarter points, it looked like the Tiger Cubs would easily defeat visiting Cloverdale.

The 28-18 victory by the Tiger Cubs was in no way easy, however.

There were two main obstacles that prevented Greencastle from continuing its early dominance Ś a gritty, relentless group of Clovers on the opposite sideline and an officiating crew which must have been under the impression it was being paid by the flag.

Greencastle had to be the only team in the state to win on Friday night despite being penalized for more than 200 yards, most of which came in the first half.

Several were of the unsportsmanlike conduct variety, but every possible type of infraction was surely whistled at some point.

ōI am truly embarrassed and disappointed by the first half,ö said coach Mike Meyer, whose team was flagged 16 times for penalties in the first 24 minutes. ōI donÆt have any answer for it, and obviously need to do a better job. It just amazes me. IÆm kind of at a loss.ö

The Cubs took the opening kickoff and marched 60 yards to their first score, with junior quarterback Brayden Baxter hitting Alex Costin for a 22-yard TD pass.

Brandon West recovered a fumble for Greencastle at the Cloverdale 43 late in the opening quarter, and Baxter hit Gavin Bollman on a 43-yard TD pass for a 14-0 lead.

Greencastle was done scoring for a while, but the Clovers were hanging tough. The Clovers got on the board with a safety with 4:20 left in the first half as a snap went out of the end zone on a punting play.

The Clovers took over in Greencastle territory after the free kick, and Parker Watts hit James Johnson on a 41-yard TD pass on third down with 2:40 left in the half to cut the gap to 14-8.

Cloverdale got another safety with 8:50 left in the third period as Trevor Woods trapped a Tiger Cub runner in the end zone for just a 14-10 deficit.

Greencastle workhorse running back Damon Moody gave his team some breathing room with an 8-yard TD late in the third quarter, but Watts answered with a 2-yard QB sneak of his own.

The Clovers got the 2-point conversion on a run by Jake Smith, and the Clovers were within 21-18 entering the final period.

Greencastle had solved its penalty problems for the most part, and the Baxter-to-Costin combo connected again for an 11-yarder early in the fourth quarter and the gameÆs last score.

Cloverdale took over on its own 45 after the kickoff, and Watts marched his team down to the Cub 14. He handed off to Wilkes, then went out in a pass pattern to get a return pass.

Greencastle lineman Trever Wood sniffed out the play, and made an unlikely interception to stop the drive. He rumbled nearly 30 yards with the ball to get his team out near midfield, and the Cubs were able to hold on for the win.

Bollman caught four passes for 166 yards and was tough for the Clovers to bring down.

ōWith his size, he was very hard for us to tackle,ö Clover coach Tom Winders said. ōWe made some adjustments, and we shut that down a little in the second half. He had two big plays that hurt us early.ö

Winders was happy his team did not fold despite its early deficit.

ōOur spirit stayed up a lot better,ö he said. ōOur heads were definitely in the game. We didnÆt have too many penalties [seven], and our defense started coming around.

ōWe were flying to the football and did a good job there,ö Winders added. ōOur offense struggled again. Until we can get that nailed down what we need to do, weÆre not going to be able to beat a good team like this.ö

Meyer was thrilled with the performance of Baxter, who shook off a subpar performance last week to have his best varsity performance.

Baxter completed 9 of 12 passes for 240 yards, with Costin hauling in five of those for the other 74 yards Bollman didnÆt get.

ōBrayden Baxter did a nice job,ö coach Meyer noted. ōHe got time to throw from our line, and he was throwing the ball with confidence. He made some good plays.

ōI would say one positive thing about this game was the way that Brayden threw the football.

ōHe ran hard, and Alex did a nice job of making the catch and getting some yardage afterward,ö Meyer added. ōThe happiest thing is that we won the game, and we are 2-0. We have to get better, though.

ōWe canÆt have that many penalties,ö he said. ōThose are things we will work on. We have to work on how we handle ourselves, and we will get it right.ö

The Tiger Cubs will travel to West Vigo (1-1) next week hoping to stay undefeated as they open up Western Indiana Conference play, while Cloverdale looks to pick up its first win of the year when the 1-1 Edgewood Mustangs come to town in another WIC game.