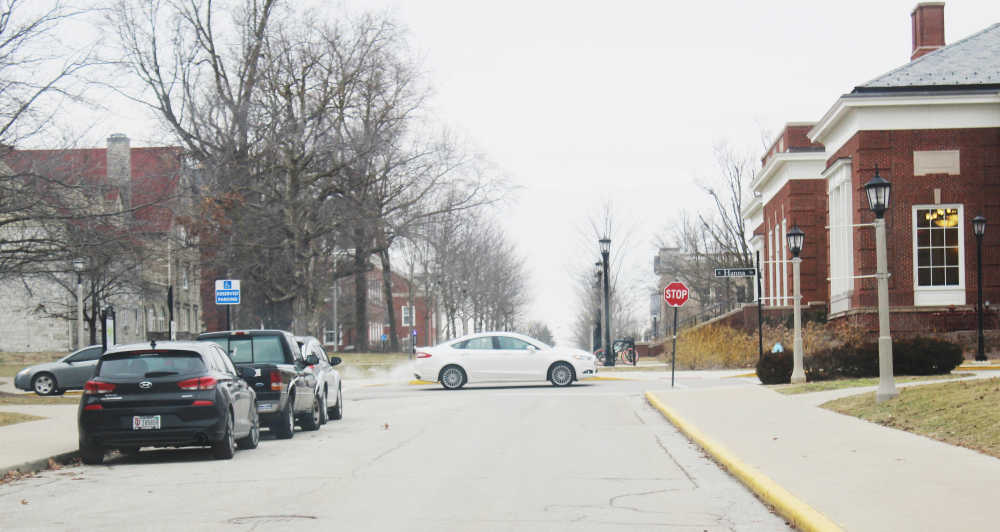 Traffic moves eastbound on Hanna Street at its College Avenue intersection in the middle of the DePauw University campus. The section of College Avenue, south of this intersection to Olive Street, is ticketed for closure to traffic if the City Council adopts Ordinance 2019-2. The measure passed on first reading Thursday night.
Banner Graphic/Eric Bernsee

Those two aren’t often dispensed together but that appeared to be just what the Greencastle City Council accomplished Thursday night.

While admonishing DePauw University officials for how they have gone about seeking permanent closure of College Avenue from Hanna Street to Olive Street, the Greencastle City Council nonetheless approved the request on first reading Thursday night at City Hall.

After lengthy discussion for a third straight month since the request was introduced in February along with DePauw’s five-year plan for revitalizing South Quad with four new dormitories, the Council voted 5-1 to approve Ordinance 2019-1 on its first reading.

Second reading is scheduled for a special City Council session at 8:30 p.m. Monday, April 15 at City Hall. It is open to the public.

Pointing to both financial and safety elements of the closure request as positives for the city, Council members noted those issues outweighed their frustration with how DePauw has handled the matter thus far.

Hoping to assure compliance by the university with zoning, parking and utilities issues throughout the five-year construction project, the Council also adopted a 55-page memorandum of understanding meant to hold DePauw’s feet to the fire as an “agreement for the management and completion of construction projects on the DePauw University campus.”

Councilman Gary Lemon, who has been one of the harshest critics of how the university has moved forward with the project, made the motion to approve the partial closure of South College Avenue between Hanna and Olive streets. Councilman David Murray seconded the motion, which received additional affirmative votes from Adam Cohen, Stacie Langdon and Tyler Wade. Steve Fields cast the no vote, while Councilman Mark Hammer was absent.

At the outset of Thursday’s 90-minute meeting, DePauw Vice President for Finance and Administration Bob Leonard made an opening statement about the project, saying he assumed the matter would meet “routine approval,” knowing the importance of the Green Center for Performing Arts to both the community and the university and how DePauw was “planning on footing the entire bill” for the much-needed stormwater remediation project in the area of South College Avenue and Olive Street.

“It turns out that assumption wasn’t quite right,” Leonard admitted, calling the approval process “a learning experience” for the DePauw team.

”Our single biggest takeaway from all this,” he suggested, is that DePauw can do a much better job communicating with its neighbors and the city.

The assumption suggestion didn’t sit well with Lemon, who hinted at how arrogant sounding that appeared.

Lemon, a longtime DePauw faculty member, said he personally has worked hard toward establishing a good relationship between city and university, noting that after more than 20 years of involvement one issue has threatened to make it look like a town-vs.-gown thing, “which it doesn’t have to be,” he stressed.

“‘Oh, we just assumed’ you’d give up a street because it’s the university,” he admonished. “You can’t just assume it, right? This is a public street. It’s a city street, and it’s a big deal.”

Lemon agreed with Council President Adam Cohen that the closure boils down to a financial issue.

“It comes down, in my opinion, to a financial argument,” Lemon said, “The university is doing us a favor (by spending) three-quarters of a million dollars (on storm sewer infrastructure) we were going to have to spend to do something eventually. I think it’s good deal.”

Saying he was going to vote yes, Lemon nonetheless shared his reaction to the university’s initial plan of attack in seeking the request.

“The initial meeting I went to,” he said, “it was all about how this was going to make the university better, and after about 45 minutes, I said, ‘Yea, but what is in it for the city?’ Tell us what’s in it for the city. You’re asking us to abandon (vacate) a street. You’re coming to us to ask us to give you something. Don’t tell us how it makes the university better, tell us how it’s going to be in the interest of the city.”

Councilman Murray said he wanted to add three perspectives to the discussion.

First, he said, “it’s not only the savings we have now through this project as a city but DePauw is assuming ongoing liability for that infrastructure. That’s something we will never have to worry about again.”

Murray’s other two issues dealt with parking -- having plenty during the construction period and having enough handicapped-accessible parking after the project is complete and College Avenue becomes an extension of Burkhart Walk, the pedestrian plaza that runs north and south between Hanna and Seminary streets.

“I’m satisfied,” Murray said, “that while it’s not a great situation with it under construction, it’s going to be workable.

“The other thing the public needs to know,” Murray added, “is DePauw, as part of this agreement, is committed to a study of the future of parking on campus by 2020.”

”Despite the issues,“ he said, “and everything that’s been said in The Banner (online comments), this to me, is simply a financial thing. We’re closing a street which very few people use. I probably drive it more than anybody because I park there and I live there (Park Street).

“We’re going to save anywhere from a half-million to a million dollars,” he added, alluding to the cost of what a storm sewer upgrade would have been. “Somewhere down the road we can put that to use on stormwater or sewer issues elsewhere in our community.

“To me,” Cohen reiterated, “it’s just a financial issue with almost no bearing on the people who live there or our transportation flow in the city.”

The safety issue was raised by Councilor Langdon.

“Every time I go down that stretch of College Street, I see students crossing the road from all different angles. There’s always activity, people coming and going. We said in an earlier meeting, ‘Safety trumps everything,’ so I think we need to do it for that reason also.”

Councilman Tyler Wade’s family lives on South Locust Street, south of the Media Center, and literally across the street from where construction will be starting in earnest at Locust and Olive on the first new first-year dorm.

“I suppose other than Adam,” he said, “my family probably has the front-row view to all of this and will be dealing with five years of construction in front of where they sleep at night.”

Admitting he was vocal in his displeasure with DePauw’s early reaction to the situation, Wade said he appreciates the university’s “willingness to listen to our concerns and try to take action to make things a little better.”

“I hope this marks the beginning of a better relationship and is not just the end of what has been a rocky start to this project,” Wade said. “I hope going forward the university can do a better job of working with its neighbors.”

The lone dissenting vote on first reading came from Councilman Steve Fields, who said he doesn’t trust DePauw officials to comply with the memorandum of understanding that has been hashed out.

“I can’t bring myself to trust DePauw is gong to do what’s best for Greencastle,” he said, adding that he believes despite DePauw officials “putting their signature on it, but when they need to, they will go around it.”

Cohen noted that the agreement includes fines of up to $2,500 a day for non-compliance, calling it the “stiffest penalty” the city has put on anyone. And for the first time, he said, DePauw will have traffic cops to police parking issues, according to the agreement.

“Trust but verify, right?” Councilman Lemon interjected, noting “it’s now in writing and there are penalties.”

Following the vote, Mayor Bill Dory noted that he has invited Leonard or other DePauw officials to attend Council meetings once a quarter to share updates on campus projects.

Dory also noted that “a fair amount” of what is covered in the 55-page agreement hammered out by City Attorney Laurie Hardwick and DPU officials, is already part of the city’s zoning ordinance.

The agreement does note that during construction, South College, which is one-way northbound, may be temporarily made into a two-way street. That, however, would come on the authority of the mayor with a 72-hour public notice.

“But if the community likes that, we could definitely bring it back to Council,” Dory said, alluding to discussion that could make that a permanent plan.

As of now, if the DePauw request is adopted on second and final reading Monday, that will set in motion the university’s project, allowing it to lock in material prices and get the project started so the new pedestrian plaza can be completed before students return at summer’s end.

The timetable for the first residence hall, a $23 million project, calls for completion by the start of the 2020-21 school year.