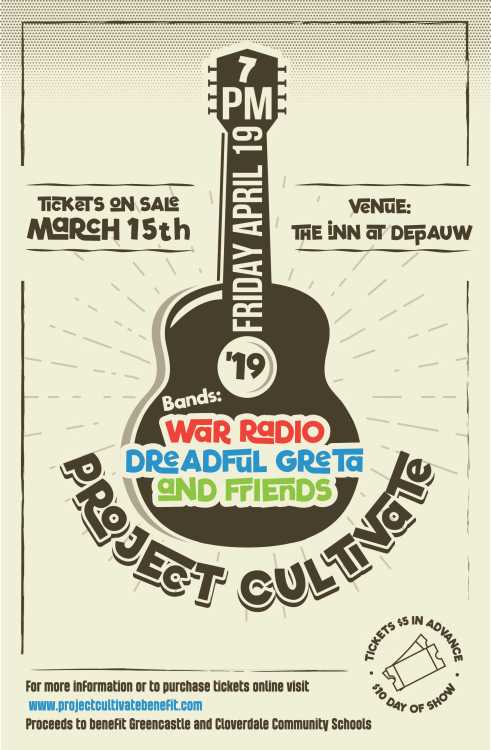 A lot of young guitarists pick up the instrument to get girls.

Greencastle High School senior Parker Black wasn’t much different, but he put that behind him years ago.

Wiser than his 18 years, Black now has different goals for his musical talents — as well as his budding management skills. 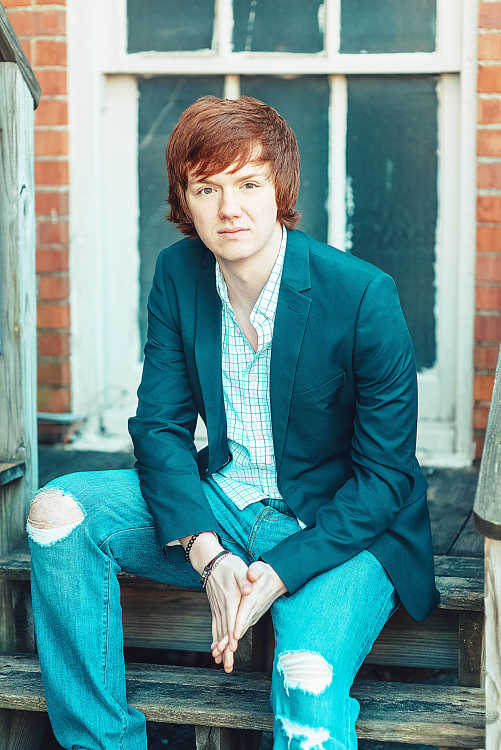 Black is putting the finishing touches on the second-annual Project Cultivate benefit concert featuring War Radio, his own band Dreadful Greta and friends. The event is set for 7 p.m. this Friday, April 19 at The Inn at DePauw.

After the inaugural show established a fund for Greencastle High School students who fall short on lunch money, Black is turning his attention to the same problem at Cloverdale High School, as well as the Mary Allison Children’s Trust.

For Black, the seed was planted at the beginning of his junior year.

“I was in the lunch line in August of my junior year,” Black recalls. “My account ran dry. The lady was like, ‘Just give me money before the end of the period.’”

However, Black found that on the return trip to his locker to get the cash, he was met by multiple people who told him they were looking for him to pay his lunch account.

“It was getting annoying,” he said. Then Black thought of those who perhaps didn’t have the money in their lockers.

“I could pay because I had the money,” he said. “There are definitely lunch accounts that people can’t pay.”

When students can’t pay, they are instead given a nominal lunch of a graham cracker, a peanut butter sandwich, fruit or vegetables and milk, instead of a hot lunch. Black didn’t think this was enough for his classmates.

“That’s what inspired me to do this.”

The first concert went well, raising $2,100 — all of which was donated to Greencastle Community Schools to cover lunch accounts.

“It was easier this year to approach Cloverdale and say, ‘I want to help you guys,’” Black said. “Principal (Sonny) Stoltz said they could do that.”

But Black already had his sights on something bigger, so he decided to split the funds this year between Cloverdale Schools and the Mary Allison Children’s Trust.

The Mary Allison Children’s Trust provides each elementary school in Putnam County with funds to give children financial assistance for healthcare, education and welfare as needed.

“It’s whatever helps the kid have a successful school day,” Black said. “It goes to the entire county. That’s exciting to me.”

While some people were surprised he was helping two causes this year, Black had a vision of something bigger and he is realizing it.

After raising an impressive $2,100 in its first year, Project Cultivate has already raised $2,700 through sponsorships - and donations before ticket sales are even factored in.

“There’s going to be plenty to go around.”

The event itself will feature three sets, with Dreadful Greta opening at 7 p.m. The current lineup of the Grateful Dead tribute band includes Black, Lucas Eckrich and Cliff Gammon on guitar and vocals, Ben Rhodehamel on drums and Jonathan January on bass.

The last set will feature Dreadful Greta and friends at 8:45 p.m.

It’s all part of a bigger plan for Black, who is planning to stay in town and attend DePauw University next year. He wants to study economics and management while continuing to pursue music and making a difference in the community.

“It’s sort of growing into a thing,” Black said. “In the coming months, we’ll be incorporating as a non-profit.”

In the next four years, he hopes to continue with his musical aspirations while pursuing an education and making Putnam County a better place.

At the end of four years, if he doesn’t have a musical career, at least he’ll have the chance at a “grown-up job” and a track record of helping others.

“The goal is to show people how to do good in the community through music,” he said.

As for trying to get girls? Black says it doesn’t work.

“That was why I started playing guitar,” Black says, recalling a girl next door. “Seven-year-old me got the idea — I had $100 and bought a guitar.”

It ended up being a worthwhile investment, just not for the reason he had hoped.

“I realized pretty soon that you can’t get girls with the guitar.”