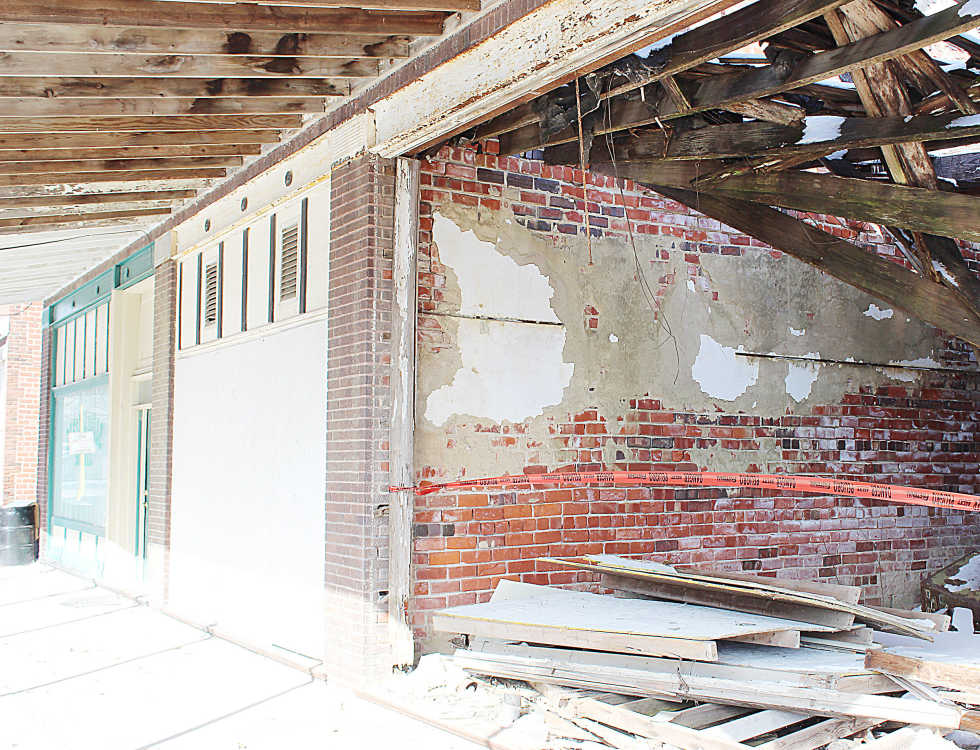 The Russellville Town Hall was condemned after the roof of the adjacent building at 213 S. Harrison St. collapsed last March.
Banner Graphic/Brand Selvia

RUSSELLVILLE -- With conflicting conclusions made by insurance and Putnam County Planning and Zoning, Russellville officials hope a condemnation order that forced town offices to relocate last March might be lifted.

Clerk-Treasurer Martha Mandleco and the council revisited the standing of the Russellville Town Hall during the council’s regular meeting Tuesday evening. The discussion began with Mandleco informing council members that Tokio Marine, the town’s insurance agency, hired an adjuster to inspect the property.

The adjuster concluded that insurance would not cover any damages to the town hall.

Mandleco said this was because such damage was determined to be caused by the failing state of adjacent buildings, and thus not considered a “direct hit” from wind, fire or water.

The building at 213 S. Harrison St., immediately next door, collapsed due to high winds only days before the town hall was condemned.

Following the meeting, Mandleco characterized the issue to the Banner Graphic as a “domino effect,” regardless of the building’s integrity.

Town Attorney Stu Weliever said any claim submitted by the town would be denied due to the town hall not being “in peril.” He added that the adjuster’s analysis should have been done sooner to prevent miscommunication between the town and Tokio Marine.

However, the confusion on the town hall’s structural integrity comes because Putnam County Planning and Zoning Director Don Hatfield condemned the building as unsafe back in March, shortly after the roof at 213 S. Harrison St. fell in.

Though the council did not take a vote on any measure, the consensus was that a structural engineer would be needed to make a determination on the town hall’s integrity.

Weliever also suggested that the town could request that Tokio Marine pay for the engineer’s services.

Should the engineer determine that the town hall is safe, the town can request that the condemnation order be lifted, and the town offices could move back into the building.

However, it remains to be determined what would happen should the condemnation stand.

In other business, Ron Shepard of HWC Engineering informed the council that recent roadwork in the town was completed last Thursday, adding that some, but not all, of the potholes in town were filled.

Shepard also advised the council to consider a project to stabilize a section referred to as the “triangle space.” He added that this space is not considered part of a road by the Indiana Department of Transportation (INDOT).

The council also approved allocating an additional $1,500 to compensate Larry Tippin, who has been assisting the town with reconciling its capital assets and internal controls for 2017 and 2018. In line with this, the council also passed Ordinance 2019-1, which establishes a policy going forward with regard to declaring capital assets, property which the town owns, valued above $5,000.

As the Russellville Water Board, council members were informed by Mandleco that the town lost about 366,000 gallons of water between April and May. Further, the town used up 89,000 gallons in one day. Mandleco said a listening to the town’s water meters was on the table, but the town was advised to hold off on this.