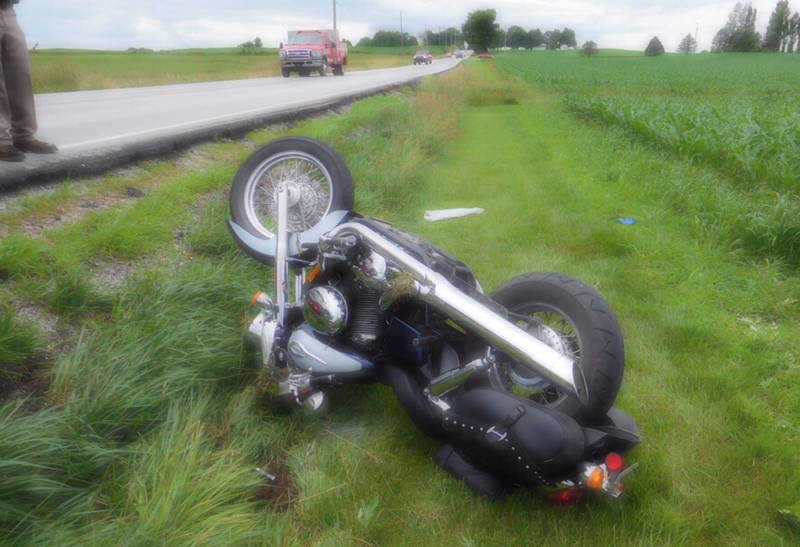 A Coatesville man was critically injured Saturday afternnon when he lost control of his motorcycle on westbound State Road 240 east of Greencastle.
Courtesy photo

The reckless driving of an unknown motorist likely left a Coatesville man critically injured after he wrecked his motorcycle Saturday afternoon.

Dalic T. Reecer, 23, was airlifted from the scene of a single-vehicle motorcycle crash with life-threatening injuries.

How Reecer came to crash the 2001 Honda ZT750 is not entirely clear, though it seems from the statements of several witnesses that Reecer’s wreck was related to the recklessness and speed of a passenger car in the area.

At 1:52 p.m. Reecer was westbound on State Road 240, just west of Suburban Propane, when his motorcycle left the roadway and he was thrown from it.

The Fillmore Fire Department was the first emergency agency to arrive on the scene and began rendering aid to the injured man.

Putnam County Operation Life followed, with a StatFlight helicopter soon called to the scene to airlift Reecer from the scene with life-threatening injuries.

No update on his condition was available as of Monday evening.

Deputy Brian Helmer of the Putnam County Sheriff’s Department conducted the investigation, learning that there was a westbound vehicle in the area driving recklessly at the time of the crash.

The first witness had been eastbound, telling Helmer that he met an eastbound white or gray car that was driving and passing other vehicles recklessly. The witness then saw the motorcycle off the roadway.

A second eastbound witness said she had also seen the reckless car, which passed her driving westbound. As she observed the car in her rear-view mirror, she saw the car pass more vehicles and then the motorcycle entered the ditch.

The final witness told Helmer he had been in the area of State Road 240 and State Road 75 when the white or gray passenger car passed, driving recklessly and passing other vehicles on double-yellow lines.

As he continued westbound, he came upon the motorcycle wreck.

While none of the witnesses said they saw the car make contact with or cut off the motorcycle, the previous reckless driving makes an incident between the two vehicles quite possible, if not likely.

Additionally, with the State of Indiana installing nearly no shoulders and severe dropoffs along the sides of State Road 240, Reecer would have had no room to regain control had he been cutoff and swerved to the right.

Anyone with additional details about the crash is asked to call Putnam County Dispatch at 653-5115.