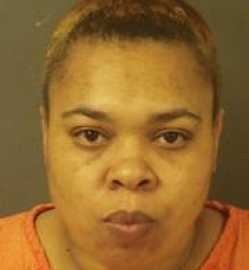 PUTNAMVILLE -- An Indianapolis woman was arrested for trafficking with an offender on Sunday after it was alleged she attempted to hand suspected suboxone strips to her husband during a visitation at the Putnamville Correctional Facility.

Tiesha Milan, 39, of Indianapolis, and her child were visiting her husband, Renell Milan, at the prison. It was during this visit that Milan is alleged to have attempted to pass 47 of these suboxone strips to her husband. The strips were concealed in a napkin.

As a result of the alleged trafficking event, staff at the prison immediately ended the visit and escorted Milan and her child to a facility office for further investigation. This investigation determined there was sufficient probable cause to arrest Milan and allege the following criminal violations:

• Level 5 felony trafficking with an inmate;

• Level 6 felony dealing in a schedule III controlled substance; and

• Class A misdemeanor possession of a controlled substance.

“I am proud of Putnamville Correctional Facility staff,” stated warden Brian Smith. “We have a zero-tolerance policy on trafficking and our dedicated staff is committed to enforcing it at all times.”

Milan was later lodged at the Putnam County Jail and her child was placed in the custody of an Indiana Department of Child Services (DCS) representative.

Suboxone is the brand name for a prescription medication used in treating those addicted to opioids, either illegal or prescription. It contains the ingredients buprenorphine and naloxone. Buprenorphine, a partial opioid agonist, blocks the opiate receptors and reduces a person’s urges. It is reported to be used more than methadone, which can be habit-forming. Unlike other opioid replacement medications that require a prescription from a specialized treatment center, suboxone can be prescribed by a doctor. It is reported that many people use suboxone at the start of treatment, as well as in continuing treatment and recovery.

Trafficking, which is the illegal introduction of contraband into a prison facility such as weapons, cellphones, illegal drugs or prescription drugs and other items, is a felony offense The Indiana Department of Correction aggressively investigates any allegation of trafficking with offenders, and seeks prosecution to the maximum extent allowed by law.