Riggle leaves behind legacy of service at Roachdale Hardware 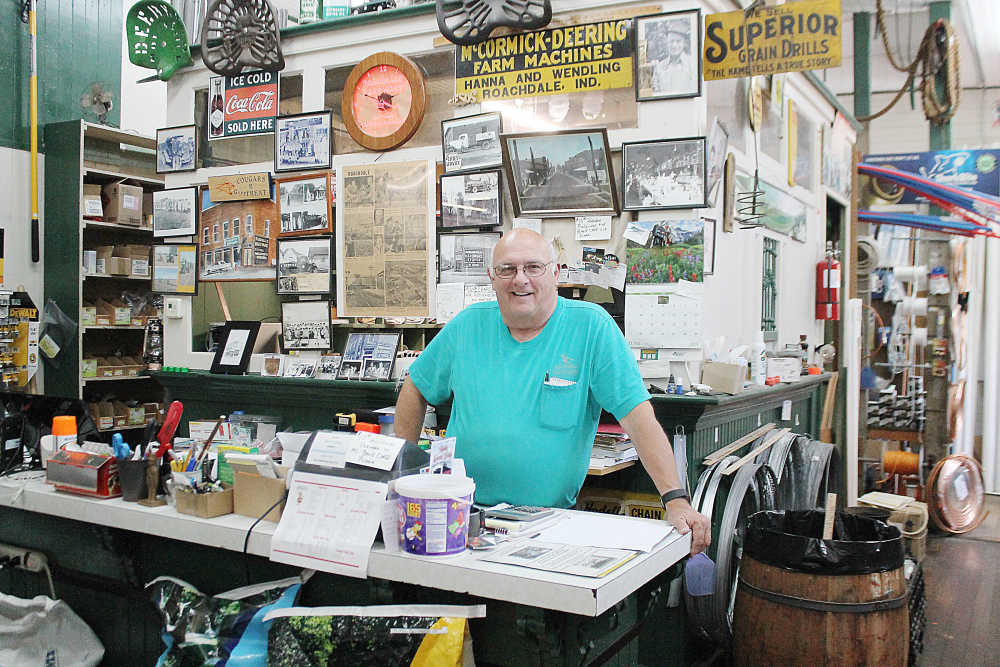 Roachdale Hardware owner Charley Riggle stands proudly at the counter from which he has faithfully served the people of Roachdale for the last 27 years. Riggle will turn the business over to new owners Brent and Belinda Wireman on Monday.
Banner Graphic/Jared Jernagan

The young couple already has a reputation as the sort of community-minded, hard-working, old-fashioned folks who should endear themselves to the people of the northern Putnam County town.

They even already have a Roachdale connection, as Brent is the brother of Servies & Morgan Funeral Home owner Anthony Wireman.

As Charley Riggle closes the book on 27 years of ownership of Roachdale Hardware, customers and friends are invited to celebrate with Riggle and his family.

New owners Brent and Belinda Wireman will take over on Monday.

If there’s one thing the Wiremans have working against them, it’s that they quite simply aren’t veteran hardware owner Charley Riggle.

Riggle will join wife Phyllis in retirement when he turns over the keys of the 101 E. Washington St. storefront to the Wiremans on Monday, July 1.

The date also marks the 27th anniversary of his own purchase of the store from longtime owners Aaron and Barbara Craft.

Back then, Riggle had a challenge of his own in trying to fill the shoes of Aaron Craft, whose ownership of the store nearly doubled Riggle’s at 50 years.

Riggle earned this reputation by keeping it simple. He’s run an old-fashioned store where serving the customer comes first.

“It has been very rewarding to be able to help people,” Riggle said. “Everybody’s got a problem, it seems like. I just figure that’s what I’m here for — to help people.”

The people have noticed, including Wireman, who in working for his brother right across the street was a customer of Riggle’s before he was ever a potential buyer.

“Anything we needed at the funeral home, we would just go over and see if Charley had it,” Wireman said. “Nine out of 10 times he did.”

“He’s one of the greatest guys I’ve ever met,” Asher said. “He’s real reliable, great to talk to. If you needed help, he’d be right there -- Charley and Phyllis both.”

Carey Bunten, another longtime customer, praised Riggle’s ability to fill in gaps in his own knowledge.

“He’s always done a really good job at trying to have what anybody would need. He’s always helpful, very knowledgeable,” Butnen said. “I’d walk in and say, ‘I need one these, but I don’t know what it is.’ He’d say, ‘This is what it is and I have one.’”

“Charley goes above and beyond every time you walk in the door to make sure you have what you want and what you need,” Corbin said. “He’s just been an excellent business man.”

It’s a good reputation that Riggle didn’t just earn in the last 27 years, but in his whole life as a Roachdale resident.

“I’ve known Charley all my life. We grew up across the street from each other,” Corbin said. “He’s an awful good guy and ran an awful good hardware -- as good of a hardware as you’ll find anywhere.”

Perhaps being a Roachdale lifer helps explain why Riggle wasn’t willing to turn the store over to just anyone.

The store has been there since 1900 and Riggle is just the fourth owner, carrying a legacy he takes seriously.

“I did not want to be the last owner,” Riggle said. “Brent and Belinda are fully what I wanted. I wanted to make sure the hardware stayed open and stayed old-fashioned. They’re going to be community-minded and be good to my longtime customers.”

The Wiremans currently live in Boone County between Lebanon and Thorntown, but they are in the process of selling their house to move to Roachdale.

In Brent Wireman’s frequent trips across the street, he began to earn Riggle’s trust.

“As Charley got to know us, he’d say, ‘I’m going to be gone next week. Would you mind covering the cash register?’” Wireman recalled.

Over time, Riggle started to talk more seriously about retiring and selling the business to Wireman.

The younger man originally told him that his first priority was to the funeral home but things continued to move forward.

“As time progressed, my wife was able to come over there and meet Charley and Phyllis,” Wireman said. “She fell in love with the place.”

After that, a plan began to take shape. Brent plans to continue working for his brother, but can split his time between the two businesses, while Belinda focuses solely on the hardware.

Additionally, Riggle’s retirement won’t officially start until Aug. 1, as he will work with them for the next month to make the transition easier.

“We’re going to take a lot of advice from Charley,” he said, “follow in his footsteps and continue what he started.”

Even in retirement, Riggle won’t be far away.

“I’m as close as a phone call and I’m only a block-and-a-half away,” he said.

Customers are also comfortable with the transition.

Riggle had told Wireman he wanted to “beat Phyllis to retirement,” but she ended up getting him by a little over two months with her retirement from Tri-County Bank and Trust.

Either way, now it’s on to enjoying life after the hardware. They have two grown sons, Charley Jr. and Aaron, and four grandchildren to enjoy.

Charley is also looking forward to travel, gardening, yardwork and one hobby that’s pretty much been on the shelf for 27 years.

“I’d like to get back to doing some fishing,” he said. “I have a fly rod I bought four years ago but I’ve only used it in the back yard.”

While he won’t miss the daily grind of running his own business, Riggle will miss the friends he’s made along the way.

“It’s been great. I’ve met a lot of people, made a lot of friends,” Riggle said. “Mr. Craft told me when he left and sold it to me, ‘I won’t miss the work, but I will miss the people.’”

It’s in those people that Riggle has really found his purpose for the last 27 years. Serving the people of Roachdale was what he was meant to do.

Then he adds with a chuckle, “To tell you the truth, I don’t remember where I intended to be anyway.”

Roachdale farmer Greg Asher also wanted to share a couple of stories about how Charley Riggle has gone above and beyond for him over the years.

I was a young farmer (age 27 or 28) and had been farming for about six years.

It was the last day of planting season and I was finishing planting beans and I was down to only about 10 acres left and there was rain in the forecast for that afternoon.

With about an hour to go my main drive chain on my planter broke. My weather radio at the time said it would be raining in Roachdale in 90 minutes or so.

I went to my farm shop and looked for another chain or parts to fix the chain that broke and had no luck. I got in my truck and went to Charley’s house. It was Sunday and I knew the hardware was closed. When I got to Charley’s he was outside.

I got out and said “Charley, I hate to bother you on Sunday but I broke a chain and I don’t have what I need to fix it and rain is coming and I’m an hour from being done.”

Charley smiled and said, “I will meet you at the hardware in five minutes.”

I went to the Hardware and Charley was there in less than five minutes. He got me what I needed and I told him to bill me extra for having to open up on Sunday for me. I got back to the field and fixed my planter and finished up that last field.

I pulled out of the field with the tractor and planter and headed for home and about five minutes later it started raining and it kept raining off and on for the next five days. Without Charley that day I would have been rained out with only one hour worth of planting left to finish my crop.

The next month when I got my bill from Charley he charged me the regular price for the chain.

It was a Saturday afternoon and the Hardware had already closed. I broke a large bolt on a piece of farm equipment and I didn’t have the exact replacement that I needed.

I went to Charley’s house and knocked on the door. His wife came to the door and as soon as she saw me she yelled for Charley and said “Greg needs you.”

He came to the door and said, “What do you need?” I told him and he said, “Let’s go to the hardware and get you what you need.”

So we got in my truck and went to the hardware. I told him I was sorry to have to bother him after hours, and he replied “What you’re doing is way more important than what I was doing so don’t worry about it.”

I got my bolt and took him back home. When he got out of my truck he said, “Now if you need anything else this weekend you come and get me. I will be home all weekend.”

Then I went and fixed my piece of equipment.

The bolt I needed ended up costing less than $1! There’s not to many people that would open up their business after hours to sell you a $1 bolt.

Charley understood farming and knew his hardware was important to all of us and did everything he could to help us for 27 years.

I will miss him owning the hardware and wish him the best and hope he enjoys his retirement. He has definitely earned it.