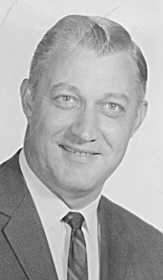 He was born Oct. 30, 1927 in Campbellsburg to Amos Franklin and Dessa True Murphy.

He is survived by brother Russell Murphy and sister Mary Murphy Howard of Indianapolis.

Paul graduated from Paoli High School in 1945 and served in the U.S. Navy at Great Lakes Naval Base. Later he worked at Allison’s in Indianapolis, running test stands on jet engines.

In 1952 he moved to Greencastle and operated Murphy’s Downtown Marathon. Subsequently his brother Ellsworth Murphy joined him as partner and they were partners in Murphy’s Enco. Their younger brother Russ, a banker, later joined them and together they started Murphy Brother’s Pontiac Oldsmobile GMC Inc. Dealership and Murphy Brothers Reality. Upon retirement, Paul moved to Florida, then in 2017, to Senior Living, Monroe Place, Bloomington.

Paul loved to travel and loved to show his children the natural wonder and beauty across the United States. And he grew in his love and dedication to his family and others. He will be missed but the lives he touched will be forever different.

A memorial and celebration of life service will be held Saturday, Aug. 3 from 2-4 p.m. at Dillman-Scott Funeral Home, 226 W. Campbell Street, Paol..

If preferred, in lieu of flowers, donations may be made to IU Health Bloomington Hospice, 619 W. 1st Street, Bloomington, IN 47403 in loving memory of Paul Murphy.

Online Condolences may be made at www.Dillman-ScottFuneralHome.com