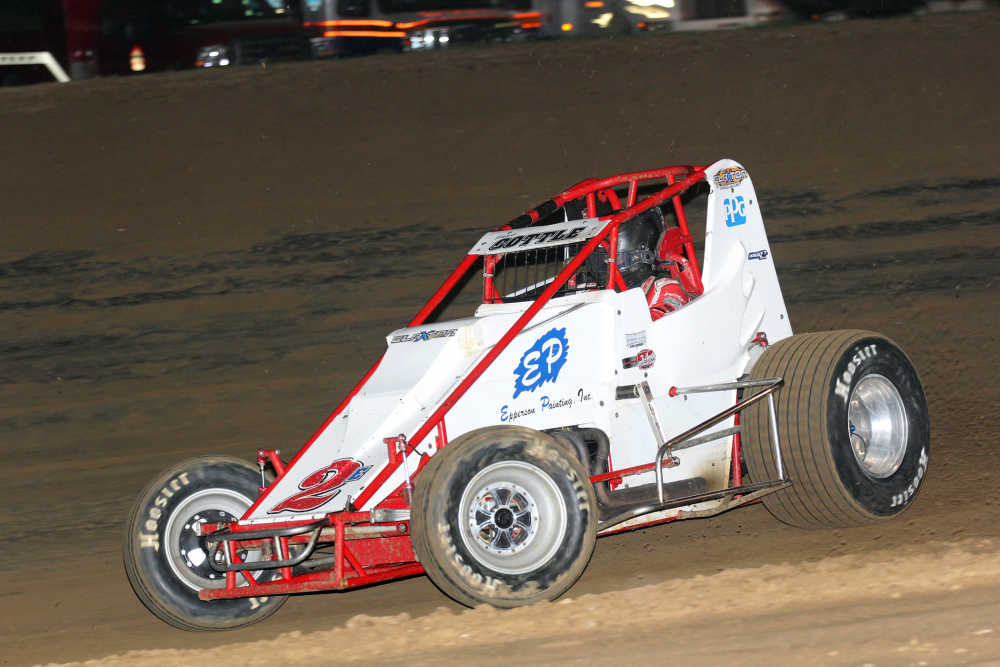 Shane Cottle rocketed away from the field to win by nearly a straightaway in the sprint car feature on Saturday at Lincoln Park Speedway.
Carey Fox photo

PUTNAMVILLE — The 32nd edition of the “Putnamville Clash” for sprint cars might have been delayed for a couple of months after rain claimed the original May 4 date.

However, Shane Cottle topped the field in dominant fashion Saturday night to pick up a $3,200 payday.

James Walters was able to make a late race pass of Tim Prince to pick up his first UMP Modified feature win of the season at Lincoln Park Speedway. Andrew Pollock was all smiles in victory lane after he pulled away to win his first career bomber feature. However, Josh Boller picked up his 10th UMP Super Stock win of the season.

From the opening green flag, Cottle proved he was going to be a force as he rocketed into the lead and quickly opened up a gap ahead of Moore and Stornetta through the first five circuits.

Cottle, aptly nicknamed “The Throttle,” lived up to that moniker by blasting to a straightaway advantage by lap 10. Behind him, the battle was for second-place as Kinser assumed the second spot with Moore attempting to hold off the advances of Brent Beauchamp, Moore and Koby Barksdale.

By lap 13, Cottle was masterfully maneuvering through lapped traffic with surgical precision. Thomas Meseraull had joined the fray after starting 12th. Kinser held down the second spot ahead of Moore, Beauchamp, Barksdale and Meseraull running sixth.

With 25 laps down, Cottle had lapped his way deep into the field and Meseraull was wheel-to-wheel with Kinser for the second spot ahead of Beauchamp. Cottle continued on his way to claim the feature win in an event that went green to checkered flag without a caution. Kinser held down the second spot with Meseraull, Beauchamp and Barksdale rounding out the top-five.

The UMP Modified feature turned into a three-way battle throughout most of the 20-lap A-main as Walters took the early lead and built a small lead over Prince, who rocketed forward after starting ninth as Derek Groomer and Michael Fish fought for third ahead of Scott Crouch and Sydney Landes.

By lap nine, the lead pack was getting into lapped traffic and Walters got caught behind a slower car as Prince made a pass for the top spot on lap 13. However, a caution flag reset the field back to the prior lap as Walters briefly regained the lead.

On the restart however, Prince once again got to the point as Groomer and Walters raced door-to-door for several laps before a mechanical failure caused Groomer to pull to the infield.

When the field took the green flag, Walters got an opening as Prince slowed momentarily with two laps to go. Walters made the most of the opportunity and took back the top spot and the checkered flag ahead of Prince, Ian Keller, Landes and Jay Humphrey Jr.

Boller had his work cut out for him in the UMP Super Stock feature after starting back in the sixth spot as pole sitter Bryce Shidler lead the first half of the race.

Shidler was still out front with seven laps remaining before Boller made the winning pass as a caution flew with six laps left in the 20-lap feature. Travis Heramb ran third ahead of Larry Raines and Paul Wright.

When the field took the green once again, Boller powered away to claim the win as Shidler held down the second spot ahead of Raines, Heramb and Chris Bennett.

In the bomber class, Pollock has long been looking for his first feature victory and Saturday night he took advantage of a front row starting spot to stay out front and get the win.

Justin and Josh Litton battled for the second spot for much of the feature before Jordan Almanza got past Matthew Cooley to chase down the leaders.

Pollock had opened up a solid lead with five laps remaining as Josh Litton jumped the cushion and lost several positions. Almanza pulled past Justin Litton for the second spot as Jeff Allen would eventually take down the fourth spot ahead of Josh Litton.