By: Joe Fields, For the Banner Graphic 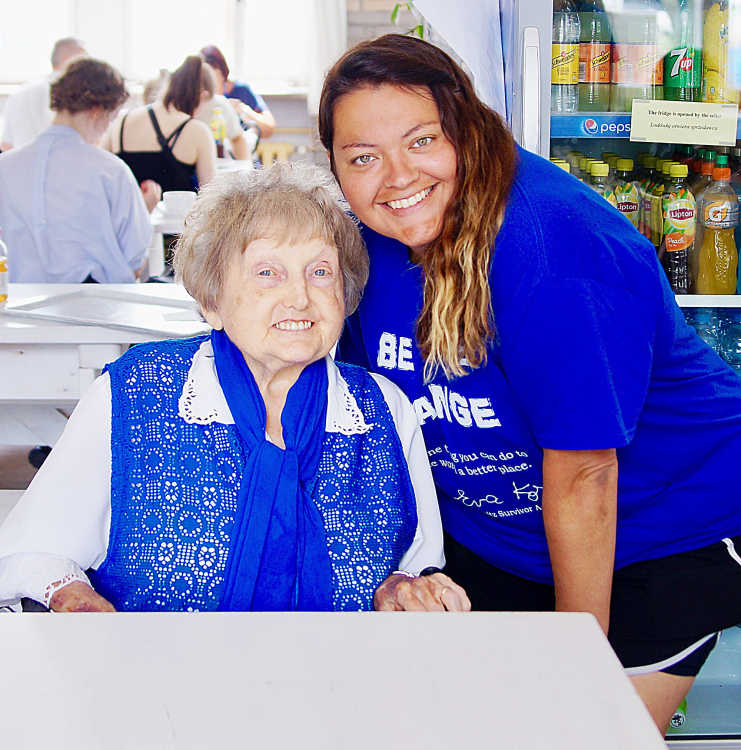 Putnam County resident Jessica Briones shares a moment with holocaust survivor Eva Kor on a recent trip to Poland. Kor passed away days after the trip was over.
Courtesy photo

The chance to take a trip to Poland with a global icon and local hero would have been enough.

But the chance to tour Auschwitz with 85-year-old Holocaust survivor Eva Kor just prior to her July 4 death was a truly amazing experience for three local women.

Three Montgomery County school employees, who also happen to be Putnam County residents, won a scholarship from Hoosier Heartland State Bank to travel to Poland with Kor and the CANDLES Holocaust Museum and Education Center and tour the infamous concentration camp at Auschwitz. 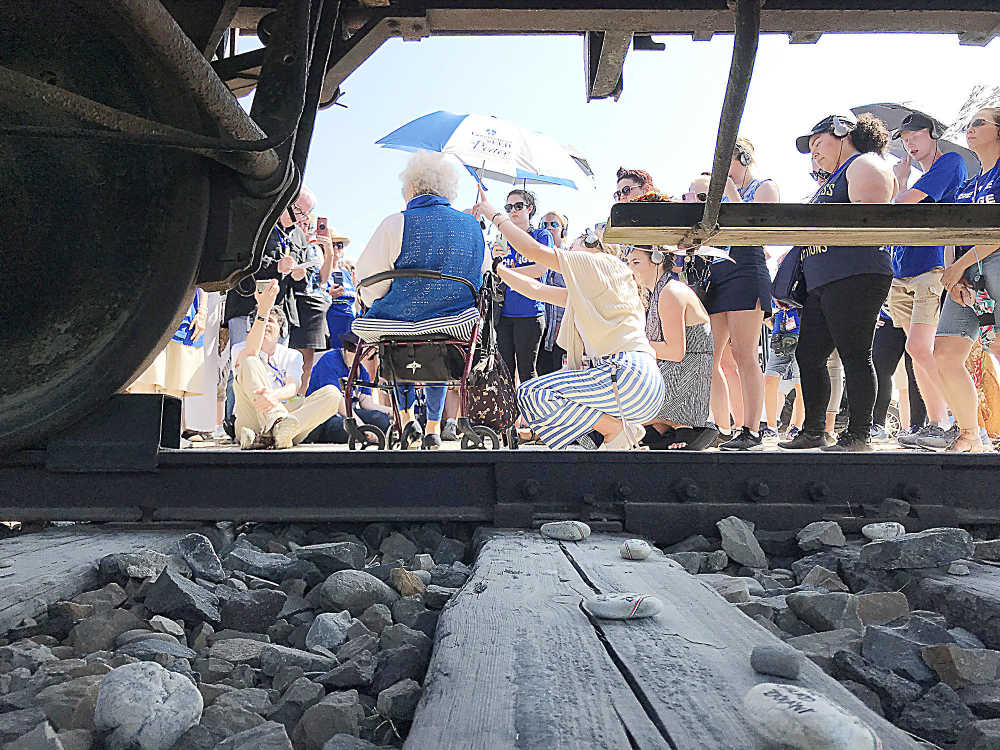 As a large train car used to move her fellow Holocaust victims looms nearby, Eva Kor speaks to a group on a recent trip to Poland.
Courtesy photo

Briones was already in Europe when she joined the group on June 22. As she arrived, it was surreal, but also recognizable.

“The very first thing that struck me was how beautiful the camp was,” Briones said. “It’s a barren place but has beauty outside of the camp with tall, bright green trees and grass, bright blue sky and puffy clouds. It struck me that this horrific thing happened here, but still be so beautiful.” 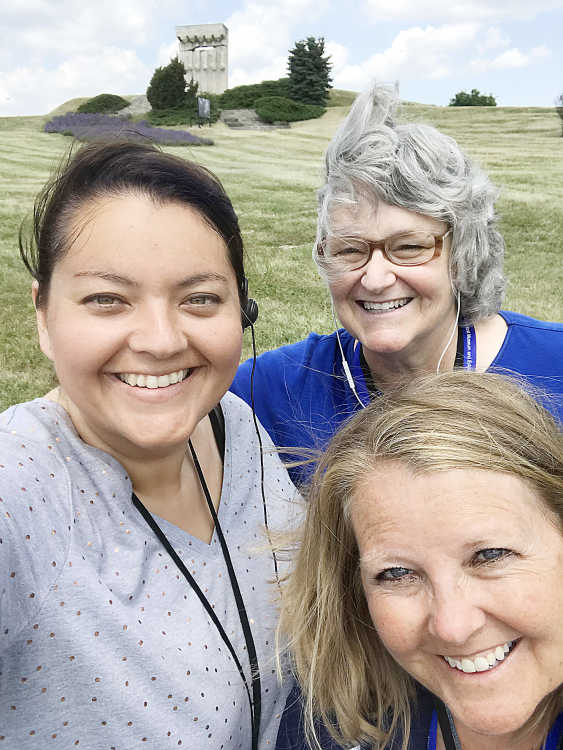 Gunn said it was interesting to tour the facility.

“It was surprising and very green. It’s hard to imagine what it was like then versus now,” Gunn said. “The scope of this killing machine is mindboggling.”

Fike said that being at Auschwitz and touring the camp brought “deep reflection and understanding” as she, Gunn and Briones walked through the very first gas chamber at the camp.

Even with the overwhelming scope of Auschwitz looming in front of them, there was a bright light to greet them who had basically been residing in their backyards.

Having met her before, they each got a chance to say hello again to Eva Kor. In her time in the camps, Kor underwent the heinous experiments from the “Angel of Death”, Josef Mengele.

Yet the presence of Auschwitz didn’t seem to snuff out her flame.

“She was like a spitfire,” Briones said. “She was very quick-witted and very funny and struck me as a fighter. My favorite experience with her was when she was told that there was another Holocaust survivor in the hotel and the man’s family brought him there, took pictures of their tattoos [their prisoner numbers] and he said he had survived the death march to Dachau so she started firing off questions.”

Another moment Briones shared was meeting a young lady on the trip from Colorado who looked up to Kor like a hero. Briones and her friends brought her to Kor and she started crying saying that Kor was the reason she managed to forgive her attacker. Yet Kor turned around and said, “Listen, I did not change your life. You changed your life. You just decided to listen to my words.”

Briones, being a counselor to young and growing students, saw this as an incredible turnaround point for “giving that power back to somebody to that control to change their life for the better.”

Fike said Kor was “blunt, yet full of humor,” adding, “she said what was on her mind. There was no gray area for her.”

Gunn said: “Eva Kor was a character; she was incredibly strong, funny and persistent.”

Gunn shared a story that Kor told them about when she had to miss their morning meal at Auschwitz because she would be undergoing experimentation.

“Their meal consisted of a piece of bread and what appeared to be coffee,” Gunn said. “Not risking losing her meal to the rats, someone suggested to her as a child to eat the rats and she had never thought of that before.”

When asked about the overall experience of touring Auschwitz for a week, Briones said, quoting last year’s recipient who spoke at South Montgomery, “It was hard to put into words what the whole week meant. It was eye-opening to see how much control one person had to nearly kill an entire ethnicity.”

Fike and Gunn both had found difficulty with putting their entire experience into words, but to see what had happened there and see the “Book of Names” Gunn said, “Where it was a book with 30 feet pages of the four million Jewish people that were killed. It was shocking to see and hear the propaganda being played and to see what Hitler at done to get people to hate the Jewish people.”

When asked about how they reacted to Kor’s recent passing, they all shared the same sentiments — shock, sadness and remembrance. They each had a fond memory of her or words of affirmation they will keep with them until the end of time.

Briones said she would have never thought she would die three days later, having dinner with Kor the Saturday before.

“I was definitely shocked but I almost felt excited for her because she (Kor) said she had lost so many loved ones and I think it’s so incredibly beautiful that she gets to be with her loved ones,” Briones said. “It also really fired me up to share her experience and mine with people. If she could fight tooth and nail and share her story with people, then I can too.”

Gunn also felt blessed to have met Kor, having heard her story multiple times now. One of the first times she had heard Eva Kor speak was when she spoke in Greencastle in 2004.

“She would want us to continue on and help create a culture of kindness,” Gunn said.

Fike, sharing sentiments with Briones, said Kor’s passing was hard but felt she left a major footprint on the earth.

“She told us that if we want to help change the world for the better, then ‘We have to be the change we want to be,’” Fike recalled.

Briones, Fike, and Gunn will be sharing their experiences in different ways.

Gunn will be sharing her experiences with her classes to show them what had happened at Auschwitz and at other death camps in the hopes to shape the future generations to prevent another Holocaust from happening. She hopes her students will take this valuable and rich history and to stand up for each other.

Fike is planning to also share with her students about her travels and experiences. Her big point is to touch upon Eva Kor and how her light had burned brightly every day until it finally faded away peacefully.

Briones will be sharing her experiences at many events, speaking at local Montgomery County schools as well as speaking at the Putnam County Public Library. The date for her presentation is set for September but the exact date and time have not been confirmed. She is also planning to share either on Facebook live or on YouTube.

Though all three of them may not be particularly excited about speaking in front of an audience, Briones summarized it all.

“I feel like that’s what I need to do,” she said. “I need to share what I had learned and experience and thanks to Hoosier Heartland State Bank for funding the trip only asking us to share what we had I learned, I fully intend on doing just that.”