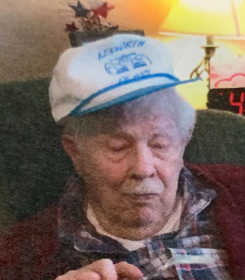 Donald Cully Wilson, 102, formerly of Roachdale, passed away on Aug. 21, 2019 at The Waters of Greencastle.

Don was a graduate of Roachdale High School and went on to attend Indiana University.

He proudly served our county in the United States Air Force as a B17 Bomber pilot. He was a POW during World War II and earned the Purple Heart for his bravery and valor in battle.

Upon returning home he was a partner in Wilson Brothers Greenhouse in Racoon. He was a member of the Roachdale Lions Club, Alpha Ta Omega and the Roachdale Presbyterian Church.

He was preceded in death by his wife Betty, parents and son Donn Steven Wilson.

Graveside Service will be at 11 a.m. on Saturday, Sept. 14 in Roachdale Cemetery with military honors and Pastor David Bower officiating. Following the burial a celebration of life service will be held at Roachdale Presbyterian Church, 14 N. Indiana St., Roachdale.

Memorial contributions in Donald’s memory may be made to the church.You are invited to visit www.serviesmorgan.com, where you may leave an online condolence for the family.

Servies & Morgan Funeral Home has been entrusted with the arrangements.