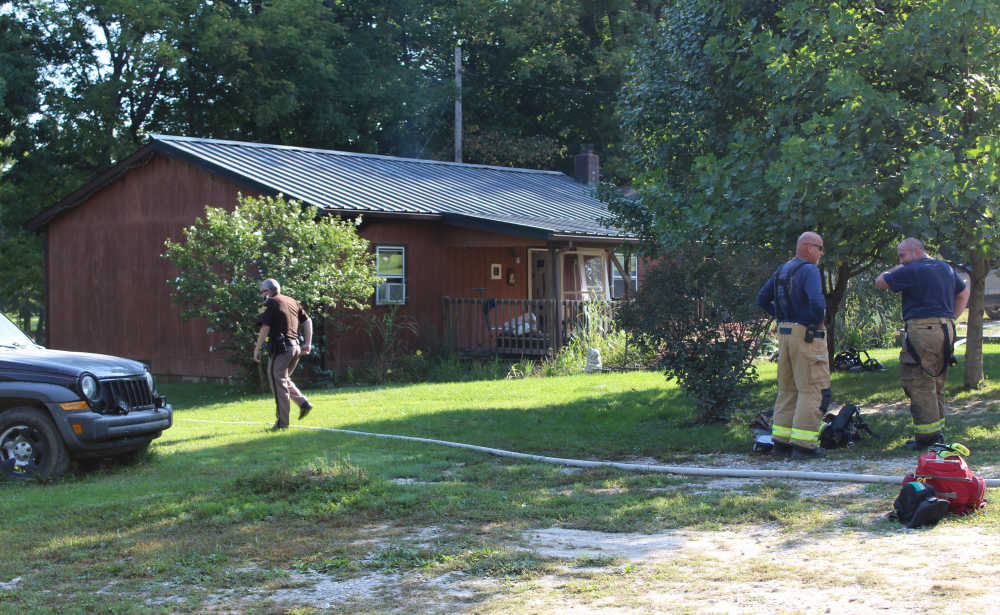 Fire and police personnel regroup after a fire at a home in the Wildwood subdivision Tuesday morning.
Banner Graphic/Brand Selvia

A call went out to the Cloverdale Township Fire Department at 9:16 a.m. for a structure fire at 1403 Deer Creek Dr., not far east from South Putnam High School. Soon after, a box alarm was called for other area fire personnel.

The Greencastle, Jefferson Township and Washington Township/Reelsville fire departments also responded to the incident with an engine each. The Indiana State Police, Putnam County Sheriff’s Department and Operation Life were also on the scene.

In a call from the Banner Graphic Tuesday afternoon, Fire Chief Kerry Shepherd corroborated that no one was injured, and provided that the fire originated at the back side of the home which faces a lake.

Relaying from CTFD’s log of the incident, he said the fire started with a malfunction in a generator, after which it damaged the back wall and then traveled up into the attic.

Shepherd said that CTFD arrived at the residence at about 9:30 a.m. to find that the fire was or had already being contained.

After overhaul had been performed, CTFD was the last unit to leave the premises at 11:42 a.m.

Considered an accidental fire in nature, no structural or content damages have been determined as of Tuesday afternoon. However, Shepherd said that the incident was being reviewed by insurance.

The home is currently listed to Michael Ray Runnells.