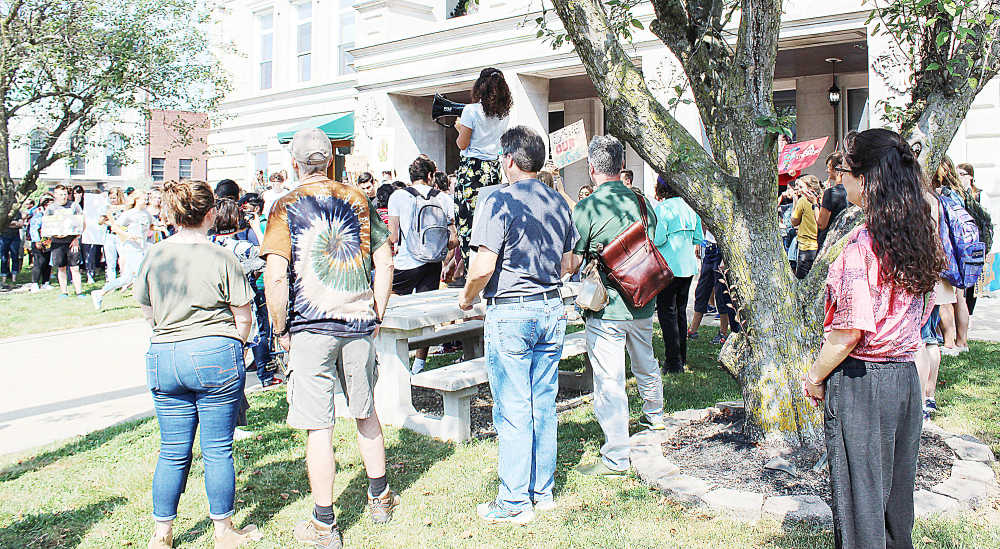 In solidarity with others around the globe, climate activists gather on the Putnam County Courthouse lawn on Friday, Sept. 20 following a march from the DePauw University campus. Marchers will gather again at 11:30 a.m. this Friday, with plans to march from the courthouse back to campus.
Banner Graphic/BRAND SELVIA

Youth climate activists and their allies took to the streets of Greencastle in solidarity during last week’s historic Global Climate Strike. On Friday, Sept. 20, an estimated 200 participants marched from the campus of DePauw University to the courthouse square in downtown Greencastle to voice their support for climate justice.

According to published reports, upwards of four million people took part in the worldwide campaign calling for immediate government action to address the climate crisis.

This Friday, Sept. 27, climate activists in and around Greencastle will march again to demand an end to fossil fuel dependency and to call for massive investment in green energy solutions. The march begins at 11:30 a.m. on the courthouse square before returning to Stewart Plaza at DePauw.

According to campus organizer and DePauw junior Bethany Cintron, activism based on grassroots coalitions is essential for confronting the climate crisis locally and globally.

“Not only is participating in a climate strike or an environmental renovation event beneficial to the community, it is our duty as inhabitants of our planet,” Cintron said.

In what was meant to be a weeklong reminder of the Climate Strike, a public art installation designed by DePauw University Art Professor Lori Miles was left in the courthouse atrium with organizers planning for it to remain in place until this Friday.

However, county officials asked that the installation, titled “Even Earth,” be removed on Monday. Permission to leave the item in the courthouse was never formally requested or granted in a meeting of the county commissioners.

It has since been returned to campus for safe keeping.

Undeterred by the removal, DePauw students, faculty and staff will join their Greencastle neighbors again this Friday to demand climate justice.

Cintron adds, “The climate strike gives people of all ages, colors, genders and identities a chance to peacefully unite and fight back against issues like industrial pollution and deforestation.”