Though it did not come naturally at first, Sheila Holloway has come to realize that sharing her story about having an addicted family member is vital to helping others through their own battles with addiction. With that in mind, Holloway again shares a little bit of her story upon being named the 2019 Difference Maker of the Year Thursday evening at Greencastle Christian Church.
Banner Graphic/Eric Bernsee

It could have carried Sheila Holloway to a very dark place. Perhaps it did for a short time.

Her son was addicted to drugs. He had been arrested in another state. Sheila’s mind raced.

“I was embarrassed,” Holloway recalled. “I wondered what I had done wrong as a parent.” 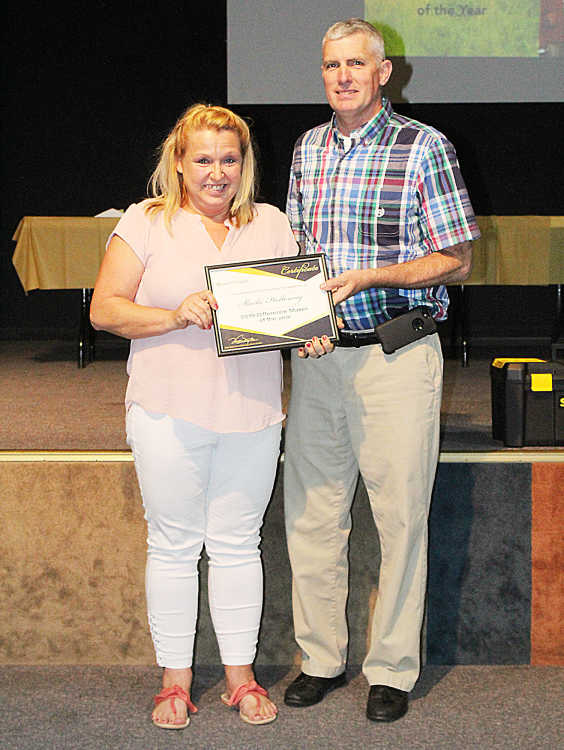 Holloway didn’t stay there for long, though. She began doing research about addiction and soon found that what those struggling with addiction and their loved ones needed were advocates.

With that in mind, Holloway spearheaded bringing two organizations to Putnam County — the Putnam County Recovery Coalition and PAL (Parents of Addicted Loved Ones).

For her efforts, Holloway was named the Banner Graphic’s 2019 Difference Maker of the Year in a ceremony Thursday at Greencastle Christian Church.

Reflecting on the award later, Holloway emphasized that she had no idea she would be the Difference Maker of the Year, even though she was one of 10 finalists honored during the event.

“I was shocked. I did not expect this at all. I wasn’t prepared,” Holloway said. “And I was honored.”

“This whole thing is like my baby,” Holloway said. “I don’t think about it as ‘making a difference,’ it’s just something I need to do.”

“Everybody was a good Difference Maker,” Holloway said.

Some of this year’s finalists spoke of how their good deeds were simply things that came naturally to them. For Holloway, that was not always the case.

Besides not feeling comfortable speaking about her own situation at first, Holloway wasn’t comfortable with the idea of speaking in front of a group of people in general.

It started out as sharing her story on a one-to-one basis before she realized that taking the lead and speaking to groups could have the greatest impact.

“I’ve gotten better,” Holloway said. “Three years ago I couldn’t have gotten up and talked about it.”

She semi-jokingly places the “blame” on her faith.

“I blame God because He knew that was not in my comfort zone,” Holloway said, “and He just kept pushing and pushing.

“My son still doesn’t like to talk about it,” Holloway added. “I say, ‘That’s the reason we do this,’ but everybody has to do it at their own pace.”

Holloway knows that winning the award gives her an even better forum for promoting the good her organizations are doing in the community.

“I’m thankful this might get a little more publicity about addiction,” she said. “We need to do something.”

On Sunday, she’ll be right back at the Christian Church as the Putnam County Recovery Coalition hosts Voices of Recovery from 4-7 p.m.

The free event will also feature music, a scavenger hunt and a resource fair.

The public is invited for an evening of education, support, inspiration and hope.

“We have to come together in the community as a family and love each other,” Holloway said. “If we don’t then we cannot help them. We all have some sort of addiction and if we don’t change or stop the way things are now, then the cycle will continue to roll down this slope.”

For Holloway and the others involved, this sort of outreach has become second nature.

“When you feel what’s going on in your heart because of addiction, it’s hard not to help others,” Holloway said. “If you can help sever some of their pain, that’s what you do.”

At this point, she can’t help it. Looking back at where this journey started, Holloway feels she has no choice.

“I look back and know why we have to stop the stigma,” Holloway said.