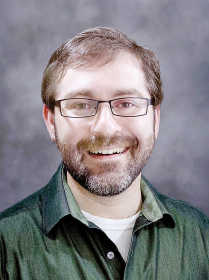 DeCarlo, a Greencastle native and a 2001 Greencastle High School graduate -- came up with the idea after attending a screening of Indiana-made short films at Riverbend Film Festival in 2018.

“I was just blown away by how good all of the films were. I’ve been connected to the film community in Indiana for a while, but until that moment I hadn’t realized just how much talent is here,” DeCarlo said.

In addition to making animated films, DeCarlo is also a web developer, and he put those skills to use to custom-build Hoosier Films online platform. Now, after just a few months of work to build the site, a growing collection of local films are available to stream at Hoosierfilms.com. Subscribers pay $12 for a year of access to the service, which gives 50 percent of its profits back to the filmmakers.

No other streaming services currently offer such a significant profit share for indie filmmakers.

“We’re really doing this to support the makers,” McGriff said. “It was important to us that they benefit from what we’re building.” In addition to the subscription service, some of the films are also available for individual purchase, and filmmakers receive 80 percent of net sales — a higher return than any other platform.

McGriff, who is originally from Muncie, was excited to join her husband in building this company because of her background studying and working with artist communities. McGriff’s role at Hoosier Films involves planning events and helping to connect filmmakers with potential audiences around the state

“I think it’s wonderful how professional artists can join together to promote their art within their own region,” she said. “It’s about helping one another rather than competing.”

“Indie filmmakers don’t necessarily have the means to hire a marketing company, or the ability to distribute their own films. And it’s tough when you only have a film coming out every couple of years,” he said. “Even if you build a following for one film, it’s hard to keep people engaged while you spend the time making a new film.”

“I like the idea that I can carry the torch for other regional filmmakers even when I don’t have a new film of my own to promote,” DeCarlo said.

“We’ve been focused on films that were recently released, because that’s easiest to find. But we’re just starting to build our collection of films from the last couple of decades,” DeCarlo said

Subscribers will receive a newsletter highlighting new content that has been added each month, helping them to explore Indiana films old and new. The newsletter will also feature upcoming film screenings in the state.

New subscribers can visit the website, hoosierfilms.com, to sign up. DeCarlo and McGriff also encourage filmmakers to visit the site to submit new films to the streaming service. Hoosier Films can also be found on Facebook at www.facebook.com/HoosierFilms/ and Twitter @Hoosier_Films, https://twitter.com/Hoosier_Films.