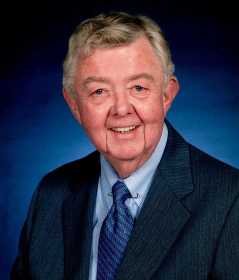 He attended Ridpath Elementary School, interrupted by a few years in Kokomo. The family returned to Greencastle and he continued his education, graduating from Greencastle High School in 1957.

Bill worked at Cannon’s Men Store during high school and college. He made many customer-friends that lasted a lifetime.

After his years at DePauw University, Bill joined Northwestern Mutual Life to build a career that lasted over 60 years. His first office was in Bloomington, where he and his wife Sandy lived and raised their two boys John and Steve. Bill and Sandy later divorced.

Bill continued his career there until his business required more sophisticated technology, so he moved his office to Indianapolis and his home back to Greencastle.

He renewed his friendship with Dorothy whom he subsequently married. Bill and Dorothy lived in Greencastle until his recent death.

A great source of pride and enjoyment are his grandchildren, Elliot, Claire, Wesley and Grace as well as his special “nurse” Lucy.

During his long life, Bill lost his son Steve and his brother Jim.

To honor Bill’s life, donations may be made to the Putnam County Community Foundation.

Cremation services have been entrusted to the Bittles and Hurt Funeral Home. Condolences and memories may be shared with the family c/o www.BittlesandHurt.com.