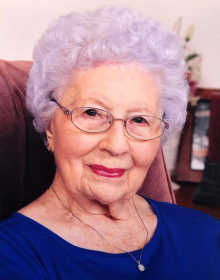 She was born April 11, 1921 in Fillmore to Raymond and Kathryn (Nauman) Deweese.

She was a 1939 graduate of Lockland High School in Cincinnati.

Bea graduated from Approved University of Beauty Culture in Indianapolis in December 1954, operating her own beauty shop in Fillmore for more than 30 years.

She was a member of Fillmore United Methodist Church and a past 50-year member of the Order of the Eastern Star, of which she was a past Worthy Matron.

She and her husband resided in Avon at Prestwick for over 20 years.

Visitation will take place Wednesday, Nov. 27 at Whitaker Funeral Home, Cloverdale, from 10-11 a.m., with a funeral service at 11 a.m. Burial will be in Fillmore Cemetery.

Flowers are welcome or donations can be made in Bea’s memory to the Order of the Eastern Star, Chapter 255, 814 Sherwood Dr., Greencastle, IN 46135.