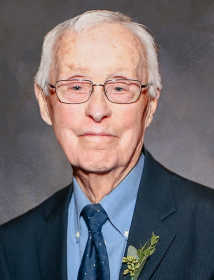 He was born in Clay County to Hila Eberwein Pell and John B. Pell on Aug. 10, 1924. He grew up in the Shady Lane and Harmony/Knightsville areas.

He graduated from Van Buren High School with the class of 1942.

On March 10,1943 he married his high school sweetheart, Rose Marie Morris. Two weeks later, in the same month, he was drafted into the U.S. Army Air Corps.

He served in the European area in England, Italy and France during World War II. He was discharged in September 1945 after the Japanese war ended.

He was in business with his father for General Roofing and Siding (later known as Pell Roofing & Siding) for several years in Brazil and Frankfort. After his father’s death, he became owner of the company.

Later he owned Pell & Sons Hardware, a section of Pell’s Bargain Mart. For a time, the company had branches in Cloverdale, Rockville and Attica.

He was a longtime member of the Harmony United Methodist Church. His other memberships included VFW, the American Legion, the Masons and the Scottish Rite. He served on the board of the Calcutta Cemetery for almost 30 years. He was a staunch supporter of the Clay Community Theatre and served as vice president for many years.

He loved barn animals and raised miniature ponies, donkeys and mules for many years. He was a lifetime member of the American Mule and Donkey Society and the Midwest Society. After he retired, he loved keeping a barn zoo for the grandchildren and the neighborhood children. He loved his church and his family so much.

He was preceded in death by his parents, son Timothy A., and two brothers, William E. and James E.

Visitation will take place at Lawson-Miller Chapel in Brazil on Monday, Dec. 2 from 10 a.m.-noon and again from 4-8 p.m.

The funeral service will be Tuesday, Dec. 3 beginning at 1 p.m. with eight grandsons serving as pallbearers. Burial will follow at Calcutta Cemetery. Mark Mullinix will officiate.

In lieu of flowers, donations may be made to the Clay County 4-H Council, P.O. Box 702 Brazil, IN 47834 or another charity of your choice in his memory.