It’s our Bell but not my Bell

Smiling as he hears the Monon Bell’s disctinctive tone, Henry Myers gets a little help from dad Mitch Myers in ringing the Bell Monday morning. The traveling trophy made a two-hour stop at Myers’ Market, Mitch’s Washington Street deli and butcher shop, with customers and employees free to ring the Bell.
Banner Graphic/Jared Jernagan

Traveling westbound on Washington Street Monday morning, I was greeted by an unexpected sight.

As I approached the Masonic lodge, I noticed two pedestrians rounding the corner from Vine onto Washington. I recognized one as DePauw Athletic Director Stevie Baker-Watson, while the man with her was unfamiliar to me.

It was what the man was pulling behind him that was most interesting me — a wagon bearing the famed Monon Bell. 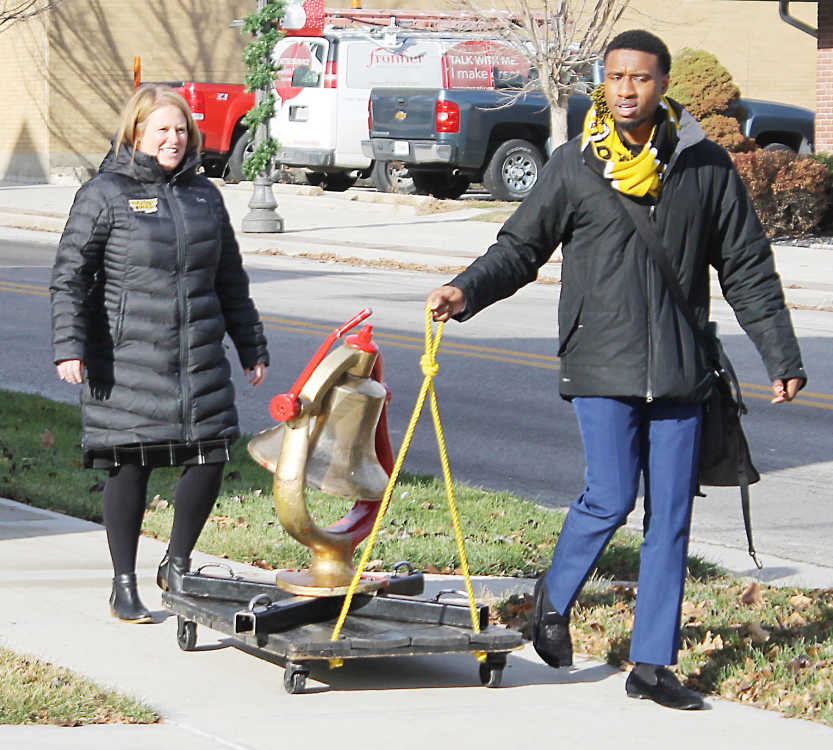 Now, I’ve seen the Bell in a number of places in the last 20-plus years — the DePauw sideline, the Wabash sideline, atop the shoulders of stout football players who just reclaimed it as their own, post-game fraternity parties, atop its perch in the Wabash College Allen Center and in the DePauw University Lilly Center trophy room.

But in all my time, I never really expected to see it on a wagon, rolling down the sidewalk.

One thing that impressed me was that the gentleman with Baker-Watson — it turned out to be Assistant Athletic Director Therno (pronounced Chair-No) Diallo — wasn’t really struggling to pull it.

Remember, the Monon Bell weighs 300 pounds or so. For perspective, it’s like Diallo was pulling Colts All-Pro guard Quenton Nelson down the sidewalk on a wooden dolly.

Now that would be a sight to see.

On the other hand, Diallo is no slouch athletically, as I learned he spent three years as a wide receiver for Division III SUNY Cortland in upstate New York.

While that explained how Diallo was so capably pulling the behemoth trophy, it did not tell me why or answer other questions racing through my mind.

What is the Bell doing downtown? Is there an easier way to transport it? Can I touch it? Do you know I’m a Wabash graduate? Do you consider me a security risk? (Because, you know, an out-of-shape 38-year-old in a Toyota Corolla could totally steal a 300-pound railroad bell all by himself.)

The Bell was downtown, Baker-Watson and Diallo told me, as a sort of community outreach. The idea is that when it’s in DePauw’s possession, the Monon Bell belongs to Greencastle, not simply the university.

This was the third different excursion into the community since DePauw reclaimed the coveted prize on Saturday, Nov. 16. It was at The Fluttering Duck for a replay of the game last Wednesday, at Almost Home on Saturday and then at Myers’ on Monday.

So, for the next two hours, the Bell sat proudly in front of Myers’ Market, where anyone was free to ring it. Anyone, that is, except the Wabash grad who had outed himself.

While no one expressly forbade me to ring it, we all understood that I couldn’t bring myself to cross that threshold with a clear conscience. Sure, I’m part of the Greencastle community and until at least Nov. 14, 2020, it’s our Bell. At the same time, it’s not exactly my Bell right now. It can’t be.

It made me think of the atmosphere on the field following the game. I didn’t exactly rush the field with the DePauw student section, but I was in the midst of the chaos, making sure not to get trampled.

It was a special environment that doesn’t happen every year. I enjoyed it for the expressions of joy and catharsis I saw all around me.

At the same time, I couldn’t shake the feeling that I was an interloper on that field. I could soak up their joy all I wanted, but it couldn’t truly be my joy. And that’s OK.

With no more public appearances on its schedule, what’s next for the Monon Bell? Well, it’s essential that it be part of the DePauw football banquet on Dec. 8. Retiring coach Bill Lynch is going out on top in the rivalry game, so the Bell has to be there.

Besides that, the Bell always needs a little TLC after its hectic November schedule. After all, it was already old when it was donated to the two colleges 87 years ago, having been retired from a Monon Railroad locomotive.

Baker-Watson said besides making sure the Bell is in good working order, experts will also perform some important painting on the artifact.

“The Bell handle, top and inside change to the color of the victors/holders of the Bell,” Baker-Watson said.

In all my years of following this rivalry, I had never given much thought to the color of the handle, top or especially the inside of the Bell. I guess you can learn something every day if you try.

Most importantly, the activity surrounding the Monon Bell is about honoring and preserving the rich tradition surrounding this rivalry.

“We, like our partners at Wabash, are proud of the tradition and want to ensure the Bell itself can remain a tangible part of the rivalry for many years to come,” Baker-Watson said.

Not even this hard-headed Wabash man can argue with that.