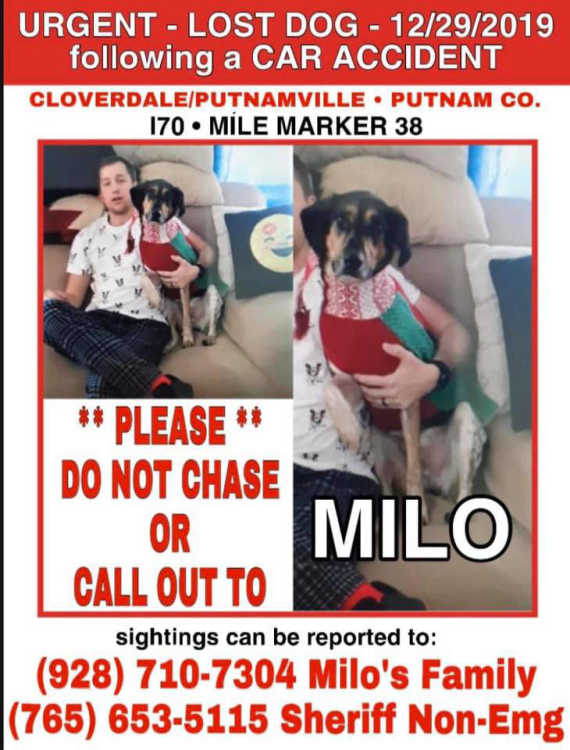 CLOVERDALE — Volunteers are searching for a dog lost following a fatal accident on Interstate 70 on Sunday.

Around 8 a.m. Sunday, Derrick Monet, 25, Prescott Valley, Ariz., was driving a 2019 Tesla when it crashed into the back of a parked Cloverdale Township fire truck near the eastbound 38-mile marker.

Their dog Milo, though, apparently ran from the crash scene.

The day after the crash, messages began popping up on social media notifying users that Milo was missing, with accompanying photos of the dog with one or both of his owners.

Then volunteers in the area began putting up signs in hopes of finding the dog, WISH-TV reported.

The Indianapolis news station went on to report that Milo is a rescue dog and served as an emotional support dog to help Jenna.

Information on Milo has also been posted to the Facebook group “Lost Pet of Auto Accidents.”

Hundreds of comments have been posted on the page, including one update from Thursday morning noting that Milo had been spotted in an undisclosed location in the area.

Organizers are not sharing the specific location, noting that they don’t want to attract extra traffic to the area.

Flyers request that anyone who sees the dog not chase or call out to Milo, as he can be skittish.

The 38-mile marker is about one mile east of the Putnamville I-70 exit and about three miles west of the Cloverdale exit.

Meanwhile, the Indiana State Police continue their investigation into the crash that killed Jenna Monet.

The Cloverdale Fire Department was on the scene responding to an earlier crash in the median. The flashing emergency lights were activated on the truck.

Firefighters on the scene told the Banner Graphic that the car appeared not to have braked when it ran into the back of the truck.

Sgt. Matt Ames of ISP told the Associated Press that investigators have spoken to Derrick Monet, who said he regularly uses his Tesla’s autopilot mode, but didn’t recall whether he had it activated at the time of the accident.

The State Police investigation continues, as does the search for the missing dog.