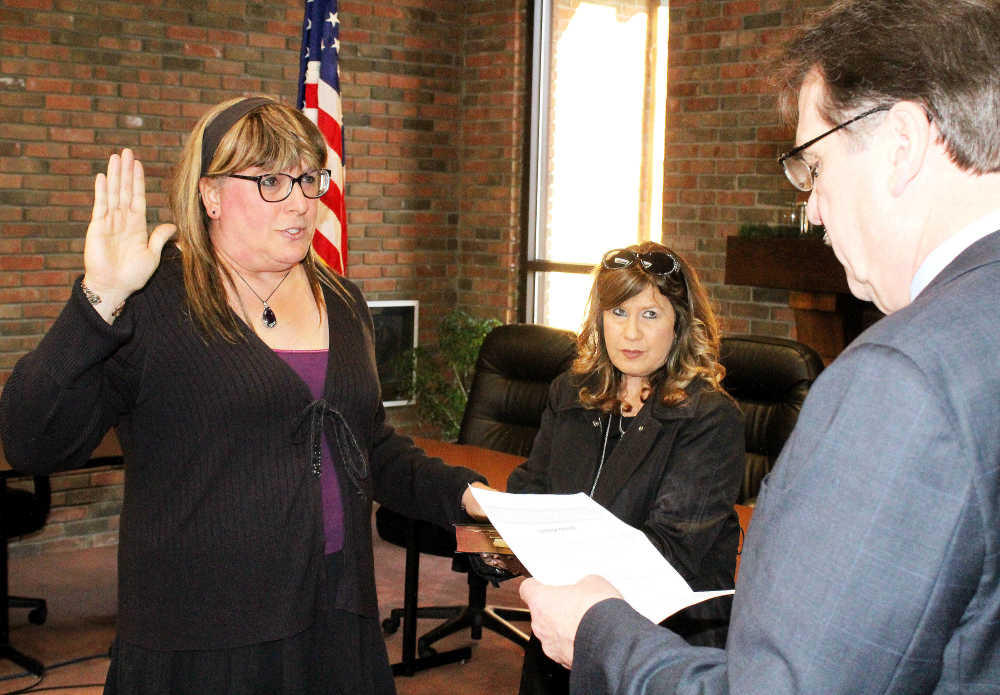 History was made Wednesday when Greencastle city officials took their oaths of office at City Hall.

Not only did the swearing-in ceremony officially make Third Ward Councilor Veronica Pejril the first transgender elected official ever in the state of Indiana, but it also marked the seventh consecutive swearing-in appearance by City Councilman Mark Hammer.

Pejril, a Democrat who earned two-thirds of the vote in gaining her initial election, succeeds Steve Fields in the Third Ward seat. 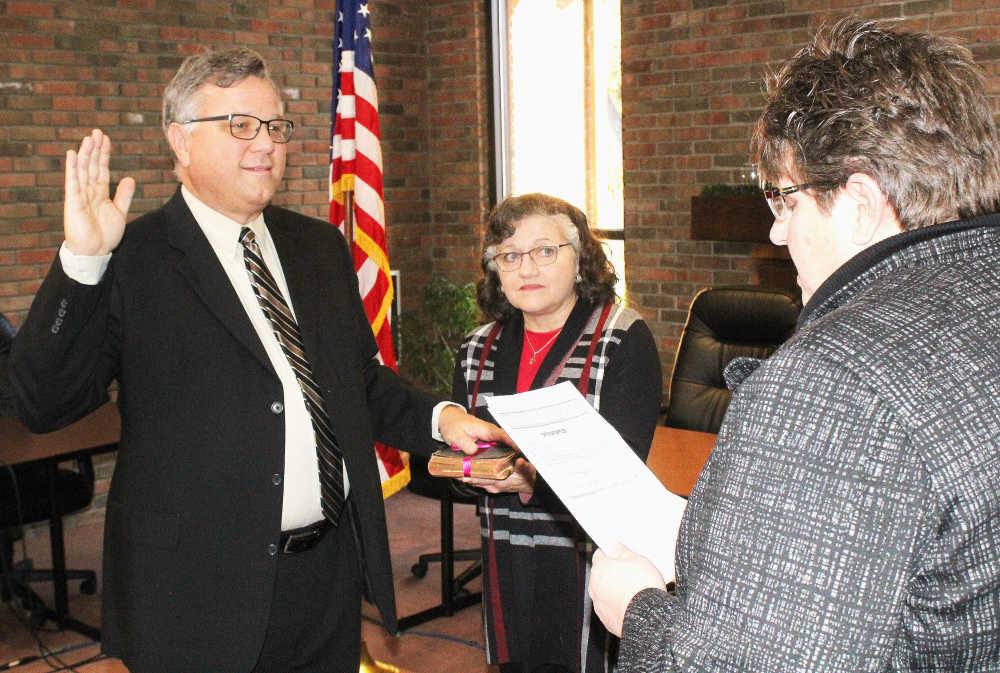 Likely the longest-serving city councilman in the history of Greencastle, Mark Hammer takes the oath of office Wednesday to begin his seventh term on the Council. Wife Jeanette holds the Bible as City Clerk-Treasurer Lynda Dunbar adminsters the oath of office.
Banner Graphic/Eric Bernsee

“In the wake of November’s election, I’m both humbled and proud,” Pejril told the Banner Graphic following the event. “To be Indiana’s first transgender elected official is humbling, because I know the efforts that my campaign team and I put forth could only be successful, because it followed decades of civil rights efforts by countless other Hoosiers.

“I am proud of our community, and all our neighbors in the Third Ward,” Pejril added, putting her election in perspective, “not because they happened to elect a transgender candidate, but rather because they rallied around a positive campaign message of unity and inclusion for Greencastle. That’s something we can all be proud of.”

Meanwhile, by all accounts, Hammer appears to be the longest-serving Greencastle councilman on record, at least -- as they say in sports -- the modern era. After five terms as Second Ward councilman, Hammer was sworn in for his second term as an at-larger councilor.

Hammer, who will have served 28 years at the conclusion of his new term, also filled in for four months as an appointed member of the Council when a vacancy occurred on the panel.

While none of the elected officials addressed the City Hall gathering before or after their swearing-in, there were other milestones as well.

The swearing-in marks the start of a second term for Mayor Bill Dory, marking 32 consecutive years that local Democrats have held the mayor’s position in a streak that started when Mike Harmless took office in 1988. Three terms by Nancy Michael (a record) and two terms by Sue Murray followed.

Also sworn in Wednesday were:

-- City Clerk-Treasurer Lynda Dunbar, for a third term for the Republican officeholder.

-- Incumbent Tyler Wade, a Republican who is now an at-large member after a four-year stint as Fourth Ward councilor.

-- At-large member Dave Murray, a Democrat who was sworn in for a second term with his wife, former Mayor Sue Murray, holding the Bible.

-- Deputy Clerk Melanie Welker, who was sworn in by Dunbar. Welker had sworn in Mayor Dory and Dunbar to begin the proceedings.

First Ward Councilman Adam Cohen, a Democrat, and Second Ward Councilor Stacie Langdon, a Republican, were unavailable for the swearing-in ceremony Wednesday morning and will either be sworn in elsewhere or just prior to the Council’s first meeting of the new year at 7 p.m. Thursday, Jan. 9.

It is at that meeting that the Council will elect a president -- Cohen has held that position the past 11 years -- and set its meeting time and appointments to local boards and commissions. The Council now has a 4-3 Republican majority, which might open the door for someone like Hammer to be named president.