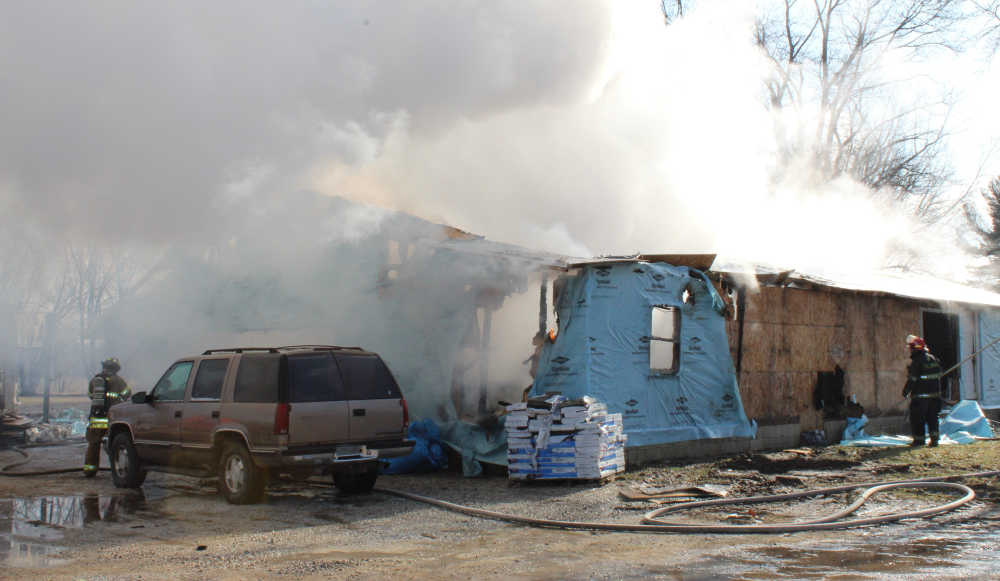 Firefighters work to extinguish the rest of the fire at 321 East St. in Fillmore Monday afternoon.
Banner Graphic/Brand Selvia

FILLMORE -- The interior of a home on East Street in Fillmore was heavily damaged in a Monday afternoon fire. However, no injuries have been reported.

At approximately 12:05 p.m., an alarm went out to fire personnel advising of an intense conflagration at 321 East St.

Two engines from the Greencastle Fire Department and the Fillmore Community Volunteer Fire Department responded to the fire, and firefighters had extinguished most of it by the time the Banner Graphic arrived on the scene at about 12:25 p.m.

At the time, the structure was enveloped in thick smoke which could be seen from State Road 240.

GFD related to the Banner Graphic that when firefighters arrived, the garage attached to the home was fully involved. Flames could also be seen rising out of the north side of the property.

GFD considered the fire to be under control by approximately 1:40 p.m., and related that firefighters were back in service by 3:10 p.m.

The roof was gone on the north side of the house, and it appeared that this is where the fire originated.

The Putnam County Sheriff’s Department was also at the scene.

The building is owned by Jeremy Bills and looked as if it was under construction, as vapor covering was attached to the plywood walls.

The cause of the fire is under investigation. Though damages are still being determined as of 3:45 p.m. Monday afternoon, at least the inside of the home appeared to be a total loss.