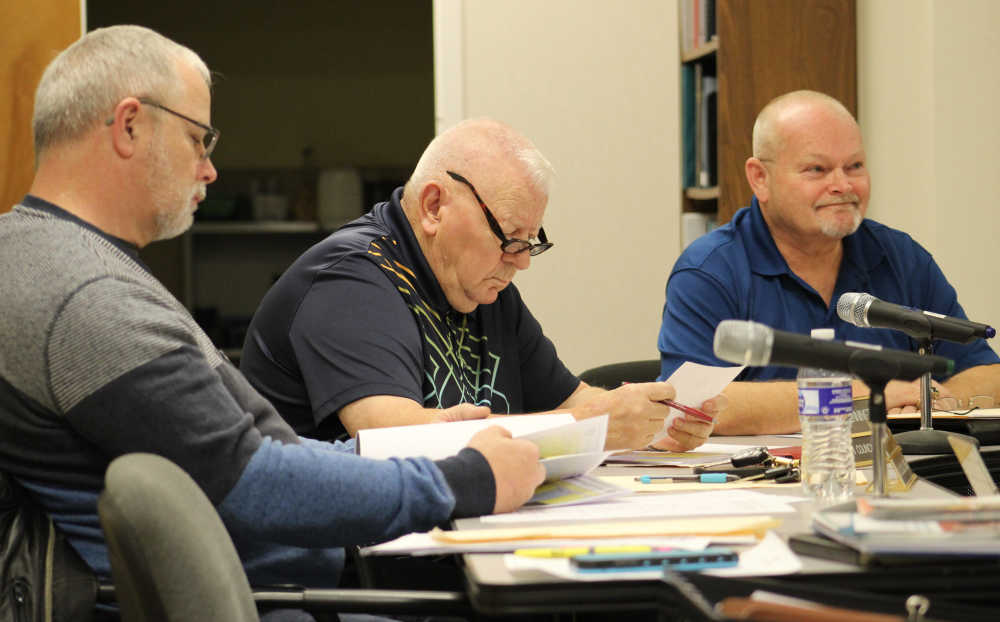 Cloverdale Town Council members Greg Jay, Gary Bennington and Rick Dearwester (from left) review the agenda prior to the January meeting. Dearwester is a newcomer to the council, while Jay was voted as its vice president.
Banner Graphic/Brand Selvia

CLOVERDALE -- Getting set to tackle another year, the Cloverdale Town Council addressed and heard about different issues during its January meeting.

As its first order of business, the council voted to retain Larry Fidler as council president through 2020. Councilman Greg Jay was then voted in as vice president, though at-large member Gary Bennington was also nominated for the position.

Next in public comments, resident Mark Wingler approached the council about safety concerns on Stardust Road, specifically at the south entrance to the Stardust Hills community. He related that his daughter was almost T-boned, as she could not see oncoming traffic due to walls which are on either side of the entrance.

Wingler opined that the walls were too high to see traffic east to west, and added that, though it is a recurring issue, speeding on the relatively fresh pavement was not the principal issue.

Stardust Hills developer and majority owner Don Gedert responded that speed still was the main concern, as he provided there was no real restriction on how fast one goes by the entrance. He opined that reducing the height of the wall would be ineffective, and that a stop sign there for eastbound traffic was a solution.

Town Marshal Steve Hibler agreed that this spot was dangerous, as many accidents have occurred in the past for the same reasons. However, he stated that having a stop sign would make Stardust Road a “traffic nightmare” for him and reserve officers.

Hibler pointed to regular events at C Bar C Expo Center, and the traffic they bring, as to why continuous traffic on Stardust Road was necessary. He also said that a stop sign could interfere with reserves directing traffic in the first place.

Later, Town Manager Wayne Galloway asked the council to approve funds to replace floats in the town’s main lift station. They will be replaced by rods which are more stable. Galloway said the floats were damaged during recent rain events.

In other business, the council approved two new resolutions. The first was Resolution 2019-8, which permits Clerk-Treasurer Cheryl Galloway to transfer unexpended appropriations to the rainy day fund. The second was Resolution 2020-1, which stipulated pulling from the town’s food and beverage to purchase a blower.

The only item in old business, the council also approved Ordinance 2019-14, which calls for a fee for residents who have five or more dogs which are six months old or older.

The council also appointed Wingler to serve as a representative at the Putnam County Convention and Visitors Bureau. He will represent the town along with Steve Fouty.