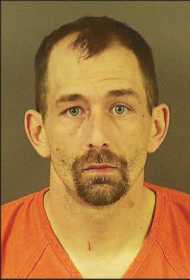 A Greencastle man was arrested Thursday afternoon after an argument allegedly led to stabbing his brother.

Around 12:30 p.m., Putnam County Dispatch received a call of a stabbing at Country Place Apartments, located at Woodhaven Drive and South Street.

Police spent the next 90 minutes trying to locate the suspect, 31-year-old Andrew King.

They eventually located him on South Locust Street. King was taken into custody and taken to the Greencastle Police Department for questioning.

The incident started as an argument between Andrew King and his brother, 33-year-old Terry “Brian” King.

In the course of the altercation, Brian King suffered a punctured wound to his arm, while Andrew suffered a head injury.

Both men were questioned and GPD Detective Capt. Michael Collins worked with the Putnam County Prosecutor’s Office to determine the charges.

Andrew King was later transported to the Putnam County Jail and booked in on a battery charge.

Greencastle schools were placed on lockdown until the suspect was located and taken into custody.

The incident was over before regular pickup time for the schools.

In a recorded telephone message to parents, Supt. Jeff Hubble indicated that school activities were continuing as usual, with extra precautions taken with guests entering the buildings.