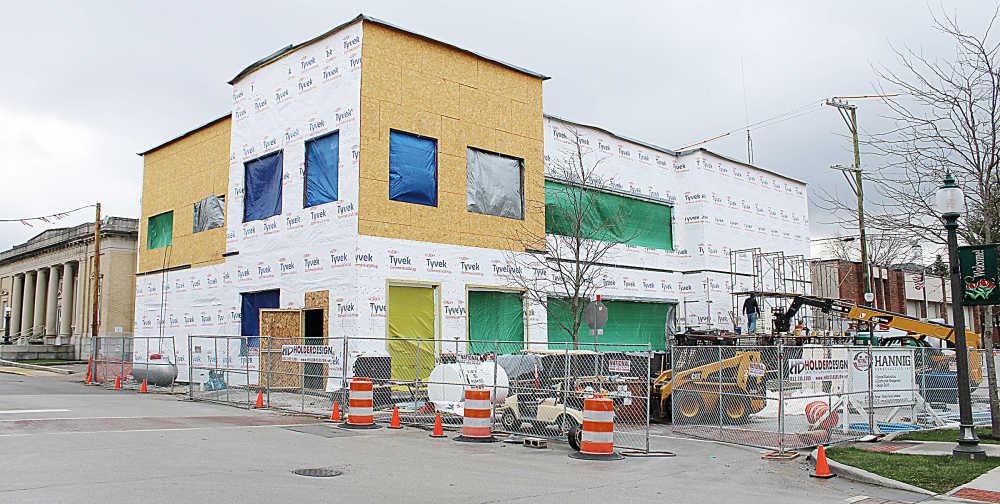 BreadWorks bakery building under construction at 2 E. Walnut St. in Greencastle. The business was recently approved by the Greencastle City Council for a downtown liquor license, though state approval is still required.
Banner Graphic/Jared Jernagan

During its March meeting, the Council unanimously approved a recommendation by the Downtown Greencastle Alcoholic Beverage Commission (ABC) to grant the new bakery/bistro at 2 E. Walnut St. one of the nine remaining unique downtown liquor licenses created by 2015 legislation.

Wasser Brewing Co. received the only previous $6,000 license issued by the city. (Bridges Craft Pizza and Taphouse Burgers are operating on liquor licenses purchased at auction).

City Attorney Laurie Hardwick reminded the Council that the liquor licenses for unique downtown dining establishments were created by the state legislature for Valparaiso initially. But Greencastle was also able to fit all the criteria, which among other requirements includes a courthouse and an old jail in the downtown.

She said the BreadWorks business is certainly unique as Greencastle has no other bakery as well as the planned cooking classes on site.

After Council passage on Murray’s motion, the veteran councilman reminded the group that the Indiana state ABC has the final word, based on the City Council recommendation. It is uncertain at present when that consideration might occur.

“I know that it’s not part of this,” Councilman Adam Cohen interjected, “but can we put some pressure on them to get the street (South Indiana) open again?”

That issue was actually raised earlier in the meeting for the second straight month during public petitions and comments.

This time the inquisitor was local attorney Scott Bieniek, who asked when the public could expect South Indiana Street, which is closed between Walnut and Poplar streets, will be reopened.

“It seems like it’s been closed an awfully long time,” he said.

Mayor Bill Dory again noted that it is a safety issue.

“As I mentioned last month,” he said, “the contractor has asked if we could keep it closed until the brick work is done.”

The fears are that a brick or tool could fall on a passing pedestrian or vehicle.

“I do understand that it’s not an ideal situation,” Dory allowed. “We certainly don’t want to have anything dropped on somebody as they’re walking by. The sidewalk on the west side of the street remains open, so they can use that.”

“If Indianapolis can work on a 40-story building and maintain streets and sidewalks open, I can’t understand why the street has been closed for months,” Bieniek said. “A couple of days to erect steel, for safety, I get that. But it’s been more than enough time to come before this body to ask for something more permanent.”

That raised another issue, one for which Bieniek had previously addressed the Council when dumpsters for construction work at Bridges were parked for months along Franklin Street, across from his law office.

Bieniek suggested, as he did then, that such closures should require going before the City Council or Board of Works as other local businesses and organizations must when they want to close a street for an evening or a weekend.

He said it seems like the decisions “aren’t consistent and aren’t being applied equally to other businesses who (like Bridges and BreadWorks) are also making contributions to the community and the downtown.”

Mayor Dory, who noted during the earlier dumpster discussion that the contractor paid to rent the spaces involved, said the issues have been addressed on a case-by-case basis.

Councilman Tyler Wade agreed that long-term street closures should come before the Council for approval.

“Then the decision would be made by an elected body rather than an appointed one when possible,” Wade added.

Councilor Veronica Pejril had one more suggestion before the Council moved on from the topic.

“That request has already been made,” Mayor Dory responded.