Gov. Holcomb orders residents to stay home due to virus 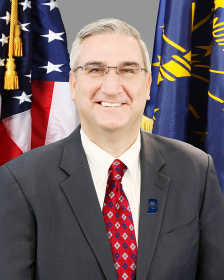 INDIANAPOLIS — Gov. Eric Holcomb on Monday ordered Indiana residents to remain at home for two weeks starting Wednesday, except for workers in essential industries or needed trips for groceries and medicine, to limit the spread of the coronavirus.

Holcomb’s order, which mirrors orders in adjacent states, begins at 11:59 p.m. Tuesday and ends on April 6 at 11:59 p.m. but he said it could be extended if needed for the state’s 6.8 million residents.

Holcomb said the next two weeks “are critical if we are to slow the spread of COVID-19,” the disease caused by the coronavirus.

“Get groceries only when you need them and only buy what you need. I’m telling you the next two weeks are critical ... if we’re going to slow the spread,” the governor said in a televised address from his Statehouse office.

His order directs residents to stay at home unless their job is an essential function, such as a health care provider, grocery store clerk, police, fire and other first responders, or those working in garbage collection, public transit, and key state services.

The governor’s office said residents who are asked to report to work during the two-week period but who believe that business is not essential should discuss that with their employer.

Holcomb said he issued his stay-at-home order to ensure the state’s health care system “is able to treat the most vulnerable.” State government will be reduced to an essential workforce, including hospitals, police, prison staff, child protective services, public health and the state National Guard, he said.

State workers will continue performing “core functions” such as processing unemployment claims and welfare applications though call centers and online, he said.

Indiana has reported seven deaths and 259 virus infections. The most recent death was an adult over the age of 60 in Allen County, the Indiana State Department of Health said.

For most people, the coronavirus causes only mild or moderate symptoms, such as fever and cough. For some, especially older adults and people with existing health problems, it can cause more severe illness, including pneumonia. The vast majority of people recover.

The governors of Illinois, Ohio, Michigan and other states have also issued stay-at-home orders due to the pandemic.

Holcomb, a Republican, has delayed Indiana’s May 5 primary election until June 2, ordered all schools to remain closed until at least May 1, banned public gatherings of more than 50 people and closed restaurants for all but pickup and carryout business.

Senate Minority Leader Tim Lanane, an Anderson Democrat, said he welcomed the Holcomb’s actions and implored everyone to follow the order.

“The more we limit our movement and contact now, as difficult as it can be, the higher chance we have of stopping this virus before even more lives are affected,” he said in a statement.

Indiana House Speaker Todd Huston, a Fisher Republican, said the order is necessary to protect the state’s most vulnerable and “to get employees and businesses back to work as soon as possible.”