Pandemic of 1918 a murky guide for sports 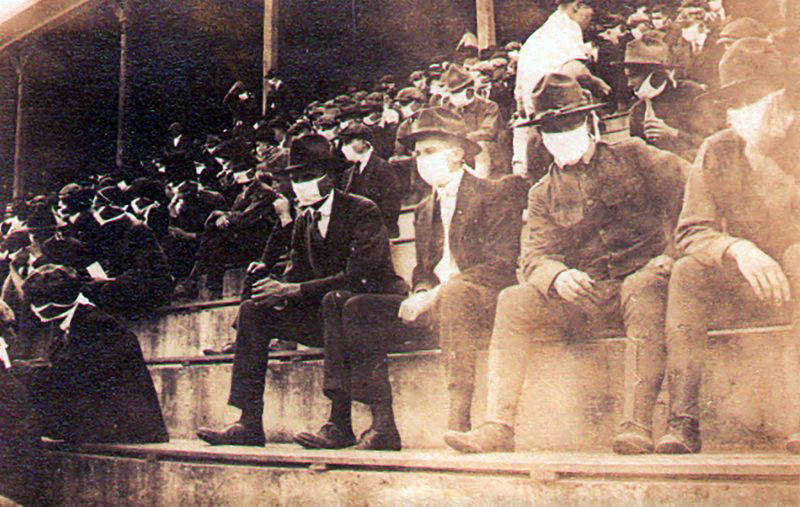 This undated photo provided by Georgia Tech alumnus Andy McNeil shows a Georgia Tech home game during the 1918 college football season. The photo was taken by Georgia Tech student Thomas Carter, who would receive a degree in Mechanical Engineering. The 102-year-old photo could provide a snapshot of sports once live games resume: Fans packed in a campus stadium in the midst of a pandemic wearing masks with a smidgen of social distance between them on concrete seats.
AP photo

The image is striking: Fans watching a college football game in the midst of a worldwide Spanish flu pandemic, wearing masks with a smidgen of social distance between them on row after row of bleacher seats.

The Georgia Tech alumni Twitter feed posted a black-and-white photo of the scene at Grant Field in 1918. Decades before tailgates, prime-time kickoffs and billions in program-supporting TV money, the ethos of the die-hard college football fan was not much different than today: Risks be damned, we’re going to the game.

It is estimated that about 500 million people or one-third of the world’s population became infected with the virus in 1918. The number of deaths was estimated to be at least 50 million worldwide with about 675,000 occurring in the United States.

And today, once fans are allowed back in stadiums, history has shown that football can come back strong.

“That’s really what started the big boom of college football in the 1920s,” said Jeremy Swick, historian at the College Football Hall of Fame. “People were ready. They were back from war. They wanted to play football again. There weren’t as many restrictions about going out. You could enroll back in school pretty easily. You see a great level of talent come back into the atmosphere. There’s new money. It started to get to the roar of the Roaring ’20s and that’s when you see the stadiums arm race. Who can build the biggest and baddest stadium?”

A comeback seems a long away off even as some schools try to prepare for what many hope will be a full season this fall. For now, headlines are still dominated by discussions about what can be done safely.

“I think a lot of people will hesitate to attend sporting events as spectators until there is a proven vaccine,” Georgia Tech professor of sports history Johnny Smith said.

College football back then was already trying to field teams amid the lingering effects of World War I. There were restrictions on travel, practice and number of games played.

The pandemic sickened players and coaches, shortened seasons and even forced some universities to scrap their seasons. On Oct. 13, 1918, The Washington Post carried a story that declared the epidemic “sweeping the country has dealt the death blow to necessary preparations, and with the stage still undetermined, the outlook is anything but bright.”

Penn coach Bob Folwell, better known as the first coach of the New York Giants, was hospitalized with Spanish flu and missed six weeks during the 1918 season. West Virginia failed to field a team and at least one player died when he ignored a cold that morphed into the virus.

In September 1918, the second and by far deadliest wave hit in the U.S., the final blow for teams trying to schedule a full season. The headlines that followed included “Masks for Michigan Men” (Daily Pennsylvanian, Oct. 23) and “Rough Year For Football, But Game Shows Its Mettle” (Chicago Daily Tribune, Oct. 21).

“A lot of them closed up camp, especially once the second wave hit,” Swick said.

Even with lower numbers of cases and fatalities in 2020, Smith said, fans will still be cautious.

“I think generally people are going to be more hesitant to return to stadiums today,” Smith said. “I think there will be a certain segment of the population that is more concerned about a second wave. That’s another lesson to keep in mind from 1918.”

And if fans are allowed, what rules will be in place? The bleak question looms large should campuses open to students in the fall: Is it safe to pack fans inside The Swamp or The ’Shoe if the pandemic is still on?

“I think when we look back on this idea of people wearing masks to attend a football game and raise the question today, would people do that? I’m not sure that people would,” Smith said.

College football commissioners in mid-April insisted sports cannot be played this fall if campuses are not open, a stance echoed by NCAA President Mark Emmert.

Still, schools are working hard to find ways to play, and there are encouraging signs even if campuses are not fully open in the traditional sense.

Much more is at stake from a century ago: TV money, bowl games, conference championships and cross-country travel all need to be sorted out. In 1918, there were no more than 90 college football teams. There are 130 major college football teams alone in 2020, spread across 41 states and competing in 10 conferences, save for a handful of independents.

To play or not to play is still the essential dilemma a century later but football — and sports — will return at some point, as it did in 1919. The Ogden Standard noted after the sport’s yearlong break in the state it was “anxiously awaiting the rustle of the cleated shoes, the line plunges of victory and the return of the greatest of all college sports.”

“People really wanted to get back to their lives,” Smith said. “Sports is all about the human experience, human connection. We’re not meant to be isolated. That’s a frustration a lot of people have in 1918 and today. I think people not being able to attend sporting events is symbolic of a larger sense of loss in America.”