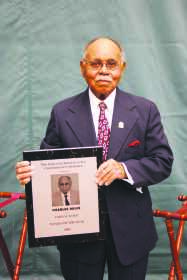 Charles Theodore Miles Jr., 90, passed away peacefully on Aug. 12, 2020 at Terre Haute Hospital after an acute illness related to cancer.

He was born on Oct. 13, 1929 in Troy, Ohio, and moved to Greencastle with his family in 1940. Members of his father’s family (Charles Theodore Miles Sr.) have lived in Greencastle since the 1890s.

For more than 70 years, Charles called Greencastle home. He was positively shaped and supported by relatives and members of his community. As an adult, he devoted his life to improving the living conditions and providing equal educational and professional opportunities for all Putnam Country residents.

Charles was a graduate of Greencastle High School, and charter member of the G Club. He was a standout performer for the track and basketball teams. Though diminutive in stature, Charles proved to be a fierce competitor and supportive teammate — traits that would serve him well throughout his life.

Charles was inducted into the Ready Reserve in 1951 and served in the Army Reserve until his honorable discharge in 1956. Charles worked at IBM in Greencastle and retired from the company after decades of service.

Spiritually, Charles affirmed his Christian faith at Bethel AME Church and later at Gobin Memorial United Methodist Church, where he served in various lay leadership capacities. He generously shared his time and talents to worthy civic and philanthropic organizations.

He was elected to the Greencastle City Council in 1991. He volunteered for the United Way, Habitat for Humanity and the American Red Cross. He also served in leadership roles for the Greencastle Branch of the NAACP and participated in local prisoner visitation programs, providing educational and emotional support for incarcerated men. He was an active member of the Kiwanis Club and maintained strong ties to administrators and faculty at DePauw University (where members of the Miles family both matriculated and worked).

In 2004, Charles was recognized as a Greencastle Citizen of the Year. Charles thought globally and humbly acted locally to enrich and enhance the lives of others.

Charles was preceded in death by his parents Charles Theodore and Priscilla Jane Miles and his sisters Marcia Lee and Joan Dorsey.

He is survived by siblings Hazel, Priscilla, Joseph and Ann, as well as numerous nieces/grandnieces and nephews/grandnephews who celebrate the life and legacy of their beloved “Uncle Charlie.”

The family of Charles Miles would like to thank the Heart to Heart Hospice of Terre Haute Hospital and the Autumn Glen Assisted Living Community for their dignified care and support.

In lieu of flowers, friends may make memorial donations to the local NAACP Branch #3051 or to Gobin Memorial United Methodist Church.