DAZE WORK: For the record, it’s time to say goodbye to Leslie Hanson 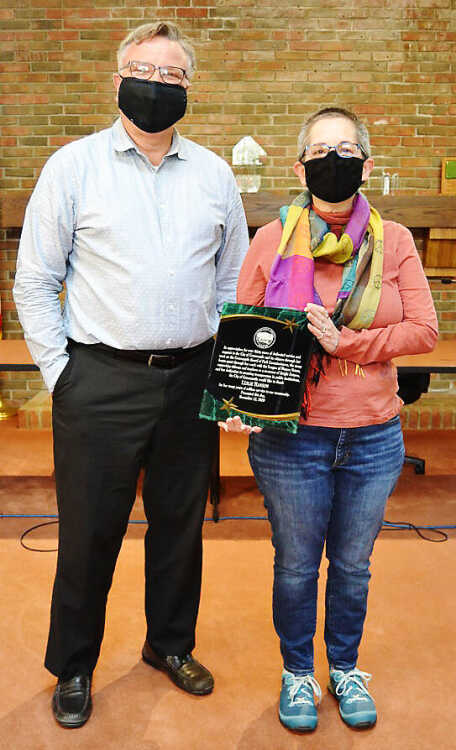 Greencastle City Council President Mark Hammer, who was urged to join the Park Board by Leslie Hanson about 25 years ago, presents Hanson with a plaque commemorating her service to the community.
Courtesy photo

Before we open our proceedings today, full disclosure: I haven’t posted my intentions 48 hours in advance.

But I’d hope you’ll forgive all that when you see that our subject today is Leslie Hanson and the community activist’s impending move from Greencastle to Arizona.

A stern guardian of the Open Door Law and Access to Public Records Law, Hanson has monitored Greencastle public meetings for the past 25 years. What started as a Greencastle League of Women Voters assignment has become more than a hobby, more than her role locally. It’s who she is. 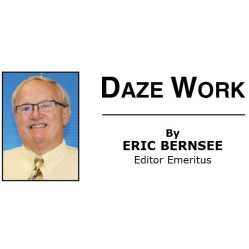 Always willing to stick her neck out and tell a board or council it was doing something incorrectly, Hanson certainly has made her share of public figures unhappy over the years.

Yet, as diminutive as she is, Leslie has stood tall for doing the right thing. It’s a crusade that could have earned her, should haver earned her Citizen of the Year in almost any year. But alas, that ship has probably sailed.

What she has been doing has all been done with a little bulldog in her but overall for the greater-good, we’re-all-in-this-together attitude, not trying to show up someone. No, “Aha! I’ve caught you in a mistake!” Ever.

Determined, tough-minded and aggressive but all in the name of you and me. Color her the conscience of the community.

In the early days of Leslie’s association with the League of Women Voters, she would often consult us at the Banner Graphic about transparency issues. Questions about 48-hour notices and postings of agendas were frequent. More recently, it has been the other way around. When necessary, we would consult Leslie about a potential issue with the Open Door Law, which in brief governs public meetings and our access to them.

It’s like when Alex Trebek would politely yet sternly admonish “Jeopardy” contestants– for not phrasing their answer in the form of a question. The rules are an inherent part of the game, and in a way, Leslie has been our Alex Trebek.

Now we’re saying goodbye to both of them.

At the Greencastle City Council meeting Thursday night, Leslie was on Zoom when City Attorney Laurie Hardwick and Park Director Rod Weinschenk stepped to the podium to begin a series of accolades delivered by former mayors (Mike Harmless and Sue Murray), current Mayor Bill Dory and every member of the City Council.

And although the item wasn’t specifically on the agenda, it came up during public petitions and comments. So before you want to call the Open Door Law cops, rest assured it was good as gold.

“The City of Greencastle is losing an important person in our community for so many decades,” Hardwick began.

Calling Leslie a “champion of transparency and the Open Door Law,” Hardwick added, “I’ve leaned on her more times that I can count.”

“I know it has been to her personal detriment as times that she was brave in confronting issues,” the city attorney added. “We want her to know how much it’s been appreciated and how much she’ll be missed.”

Harmless, who briefly addressed the importance of volunteers to the city, joked, “I was so incredibly brilliant to ask Leslie Hanson to join the Park Board.

“I knew she was aggressive but I didn’t realize what a community activist she was,” Harmless recalled, noting that Leslie came to him to say, “‘Mayor, we’re going to need to build a new pool.’”

The old pool was leaking badly, he recalled, so Leslie ran with the ball on making a new pool a reality.

“Leslie encouraged me to raise taxes,” Harmless recalled, “in an election year, to build a new pool, which we did.”

Harmless then returned to current affairs.

“Are we going to miss Leslie Hanson?” he asked. “Yeah, we’re really, really going to miss her. But what’s important is that she knows how much we treasure her.”

Sue Murray was up next.

“She’s made thousands of us more informed voters,” she praised. “She’s made government throughout Putnam County more transparent. And she’s made us all better politicians along the way.”

Continuing the high praise, Murray said Hanson has brought tolerance and commitment to the forefront as she “tried to bring equality and tolerance and understanding to many of us in this community.

“We are all better people and we’re a better community because of you.”

Mayor Bill Dory echoed previous remarks, noting that the “transparency discussions we’ve had over the years have help me in my current positions.”

Hanson responded, noting she moved to Greencastle more than 30 years ago when husband Bryan took a teaching position at DePauw University.

“I appreciate all the opportunities I’ve had here,” she added. “This has become my home and it’s bittersweet to leave.”

Councilor Veronica Pejril thanked Hanson for “holding everybody’s feet to the fire, including my own, regarding transparency and accountability. I hope we can all take a little bit of Leslie with us each time we enter the public sphere.”

Via Zoom, Hanson said she appreciated all the accolades.

“But work I’ve done, I haven’t done alone,” she stressed. “I joined the League of Women Voters and found my voice, and then there are people in the community who helped me raise my voice.

“I am in awe of what this community has become and how over the years it’s gotten better.

But Councilman Dave Murray instead got laughs with his comment.

“Leslie, Greencastle School Board meetings will never be the same,” he said.