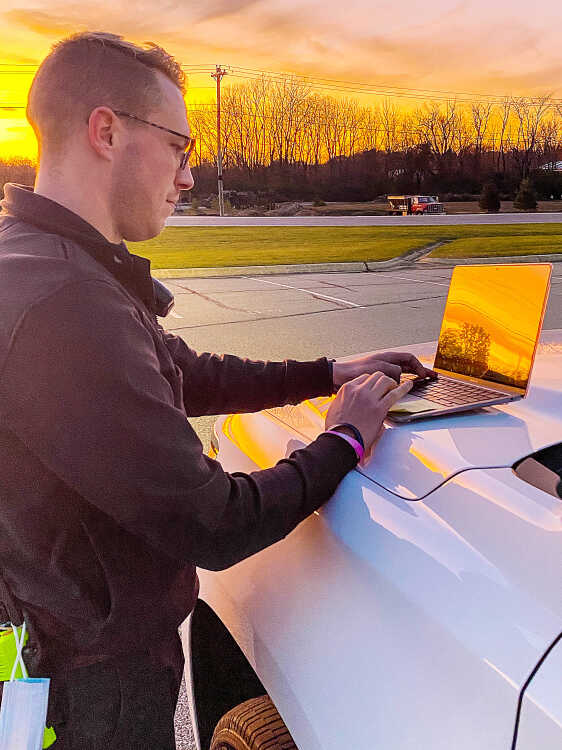 Describing himself as a paramedic first, a manager second, Putnam County EMS Deputy Chief Anthony Taylor nonetheless pours himself into all aspects of his job, sometimes working upward of 20 hours a day. For his commitment to the community, Taylor is featured as one of Putnam County’s “Unsung Heroes.” To learn more about our Unsung Heroes, turn to page A3 as well as the special B section in today’s Banner Graphic.
Courtesy photo

You want to talk about stress? Try working full-time as an EMT while also completing your master’s degree in public health while also attending school to become a paramedic.

That was Taylor’s reality less than two years ago.

Yet nothing exactly prepared him for becoming the deputy chief of Putnam County EMS right as the pandemic began to hit back in March.

“I never foresaw myself becoming an administrator at an EMS agency when a pandemic hit,” Taylor admitted. “It was a really big curveball.”

Yet, that’s been Taylor’s reality for the last eight months and by all accounts his performance has been beyond expectations.

For that reason, Taylor was nominated by EMS Chief Kelly Russ to be one of Putnam County’s “Unsung Heroes.”

Dozens of people from throughout the community were nominated. To learn more about Taylor’s fellow Unsung Heroes, click here.

“Anthony has worked countless hours (beyond his salary) to staff the trucks when there were shortages during regular staff illness,” Russ told the Banner Graphic. “He’s come in the wee hours of the morning to stay on top of tasks included in his normal job duties just in case something was to come up in staffing, as well as staying on top of making sure all employees have had the proper PPE to respond adequately during the pandemic.

“As the chief, my name automatically gets tied to anything the department has something to do with,” Russ continued, “but he truly is an unsung hero in this department and I couldn’t do my job without him.”

Taylor describes his EMS career as almost a happy accident.

“I actually fell into it,” he said. “I took an EMT class as an undergrad. I literally fell in love with it and I couldn’t see myself doing anything else.”

From there, the last six-plus years have taken him from ambulance services in Martinsville and Morgan County to a job with the Marion County Board of Health and onto Indianapolis EMS, where he eventually became an EMS educator and remains a part-time paramedic.

Along the way, there was also the school that earned him that paramedic certification and Masters of Public Health.

Then when fellow Indianapolis paramedic Russ took the job in Putnam County, Taylor jumped at the chance to come along as deputy chief.

From Day 1, however, they were facing the challenge of their careers in COVID-19.

Taylor’s background in public health has been helpful, as he admits, he “definitely was not ever prepared in paramedic school for treating a pandemic.”

He did, however, understand the importance of contact tracing and getting personal protective equipment for not only Putnam County EMS providers, but to other emergency workers in the community.

“If our providers get sick, they can’t protect the community,” said. “Our people are obviously exposed quite frequently, but thankfully they have the respirators and all the PPE they need to limit exposure.”

Taylor said that such steps have helped, as only one EMS worker in the county has had to miss time for COVID-19 and that was actually for exposure outside of work.

And while Taylor has become the logistics and supply-chain guru at Putnam County EMS, he refused to take all the credit, giving high praise to Lisa Zeiner, in her former role as the preparedness coordinator for the Putnam County Health Department, and to 911 Director and Putnam County Emergency Management Agency Deputy Director Dave Costin for all they’ve done to help all departments in the county.

“It has truly been a team-based approach in order to keep everybody safe,” Taylor said. “At the very beginning, we were very short of PPE. We had to scramble. Indianapolis EMS actually had an overabundance of PPE, so they sold us some.”

Taylor’s administrative tasks have also meant some much larger projects. When the county had $1.2 million in CARES Act funds in response to the pandemic, Taylor put together the approved proposals that will mean a rebuilt EMS administrative facility with a negative pressure quarantine room for first responders, mechanical CPR devices for EMS and local fire departments, two new vehicles for the department, stair chairs, video intubation systems and other new equipment.

Of course, the work of actually being a paramedic remains Taylor’s first love, so he has not shied away from that.

“There was one weekend when I know I worked 57 hours straight so we didn’t have to shut down,” Taylor recalled. “I don’t want to do that because we are right at the bare minimum. There were several of them who were working and burning at both ends to make sure the community had what it needed.

“I love being a paramedic,” Taylor said. “I take so many runs because I miss being out there. First and foremost, I am still a paramedic for this county. I am a manager second.”

With so many duties that he truly enjoys, Taylor can’t seem to find enough hours in the day.

“It’s probably unhealthy but I enjoy working a lot.”

When Taylor does find time off, he admits that he does enjoy sleeping, as well as watching Netflix and perhaps a bit of gaming.

He’s also found time for a new addition to his life — a French bulldog named Rosie.

Even away from the job, though, Taylor remains committed.

“A lot of my downtime is making sure I’m still sharp on my skills,” he said.

Asked if he’s seen anything that’s really stuck with him during the pandemic, Taylor said it has not been any one run or patient encounter.

“It’s the true desire to help people that’s been exhibited by the employees of Putnam County EMS,” Taylor said. “They didn’t know they were going to be hit with a pandemic, but here they are, going out and taking care of the community. The same could be said of the community at large. There is truly a desire to take care of one another.”