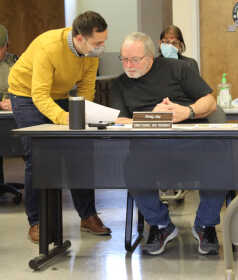 CLOVERDALE -- After serving the town for the past three years, Daniel Hofmann has decided to step back from his role as the Cloverdale Town Council’s legal counsel.

Saying that he needed “a little bit of a break,” Hofmann told the council that now was a “good time” for him to step back from the position and focus more on his family.

He professed his belief that the council is united and that the town is moving forward with Kelly Maners as a new clerk-treasurer. He emphasized a new town attorney and town manager as integral parts to be filled.

The special meeting was held for the council to specify when and how the town manager position would be advertised, as well as how applications would be reviewed.

The council approved to hire Richard Shagley of Wright, Shagley & Lowery in Terre Haute to replace Hofmann. He is set to begin his tenure at the council’s next regular meeting on Tuesday, Dec. 8.

A Cloverdale native, Hofmann was hired by the town council in July 2017 to succeed Allan Yackey. He has served on the Cloverdale School Board, and was both a compliance officer and an associate trust officer for First National Bank.