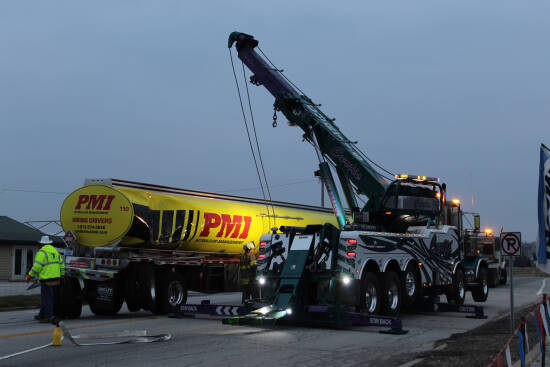 Curtis Wrecker retrieves the tanker which was involved in a collision at the intersection of U.S. 36 and U.S. 231 Tuesday morning.
Banner Graphic/BRAND SELVIA

BAINBRIDGE -- A wreck involving a dump truck and a tanker created traffic at the intersection of U.S. 231 and U.S. 36 north of Greencastle Tuesday morning.

Putnam County sheriff’s deputies were dispatched to the scene at approximately 6:20 a.m. for the incident. When they arrived, they found a tanker standing on the eastbound side of U.S. 36, while a dump truck was resting in the intersection. Two highway signs were damaged and an overhead signal pole was struck.

According to the narrative taken by Deputy Derek Line, Leon advised that he was eastbound on U.S. 36 when he did not notice that the eastbound traffic signal was red. He accelerated to try and avoid the dump truck, which was traveling southbound on U.S. 231.

Colon stated that he had a green signal to continue southbound on U.S. 231 when he eventually struck the rear of the tanker trailer with the front-end.

A witness to the crash stated that the trailer bounced upward after it was struck and hit the overhead traffic signal.

Both vehicles were not carrying any material at the time of the incident.

On the scene to assist the Putnam County Sheriff’s Office were the Walnut Creek Fire District and the Indiana State Highway Department. Curtis Wrecker retrieved both vehicles.

Leon stated that he had no injuries. Colon advised that he had light pain in his right hand, but did not want to be seen by medics and would get it checked out later.