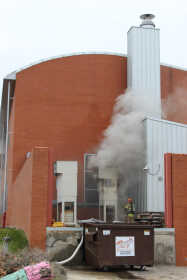 A firefighter works to extinguish a fire that started in a filtration system at the Peeler Art Center in Greencastle.
Banner Graphic/BRAND SELVIA

Area firefighters were dispatched to DePauw University’s Peeler Art Center at the corner of Hanna and Jackson streets for a fire late Tuesday morning.

An alarm went out to the Greencastle Fire Department at about 10:30 a.m. advising of heavy smoke at the back of the building.

Fire crews arrived to find the smoke coming from a dust filtration system connected to the woodshop in the building’s basement.

Greencastle came with two engines and a rescue truck. Crews from the Madison Township, Cloverdale and Fillmore fire departments arrived with an engine each. The Reelsville Fire Department covered GFD’s station with an engine.

A GFD representative told the Banner Graphic that the fire originated in the filter housing and then extended into the ductwork. However, what actually caused the fire has not been determined.

Firefighters had to take apart the ductwork to completely extinguish the fire, with approximately 1,000 gallons being used. Smoke was also cleared from the building.

Jackson Street was closed for the duration of the incident, with traffic traveling both north and south being diverted.

Greencastle’s units went back into service at about 1:05 p.m. No injuries as a result of the fire have been reported.