PUTNAMVILLE -- An Indianapolis couple was arrested Monday night after allegedly shooting at a vehicle along Interstate 70 and then leading authorities on a chase that reportedly reached speeds in excess of 100 mph. 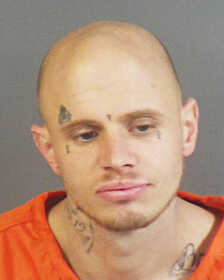 Lodged in the Putnam County Jail are Robert J. Ballard, 31, and Megan S. Muse, 26, on charges of criminal recklessness with a firearm, pointing a firearm, possession of a syringe and resisting law enforcement. Ballard, meanwhile, also faces additional charges for reckless driving.

The pair appeared before Judge Matt Headley Wednesday in Putnam Circuit Court and had pleas of not guilty entered on their behalf.

Ballard and Muse were arrested after an incident that began about 9:15 p.m. Monday when a driver, claiming that he had been shot at while en route along the interstate, flagged down Indiana State Police Trooper David Cox near the Cloverdale /U.S. 231 exit of I-70.

The Putnamville trooper had been patrolling near a construction zone there at the 41-mile marker. 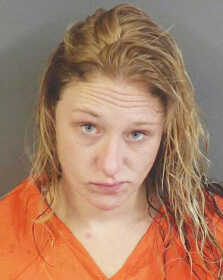 The eastbound motorist told Cox he had been shot at by someone in a westbound white Cadillac.

Minutes later, troopers spotted the suspect westbound on I-70 and activated their emergency lights. However, instead of stopping, Ballard accelerated, driving off and weaving across both westbound lanes, while reportedly reaching speeds of approximately 115 mph.

As the pursuit approached the 23-mile marker of I-70 in eastern Clay County, troopers placed two sets of STOP sticks in the path of Ballard’s vehicle. The Cadillac struck both sets of STOP sticks with all four tires, instantly flattening them, police said.

With speeds then reduced to 35 mph, the suspects continued westbound, driving on the rims until reaching the 16-mile marker when Ballard reportedly lost control of the car and it traveled into the median.

There authorities conducted a felony traffic stop, taking both Ballard and passenger Muse into custody without incident.