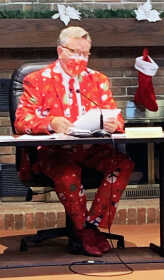 After a year spent agonizing over raising water rates and maneuvering city resources in the ongoing COVID-19 battle, the Greencastle City Council closed out 2020 on a lighter note at its recent December meeting.

Without a soul in the City Hall audience, the Council wrapped up several issues and concerns in its shortest meeting of the year, with adjournment coming just a minute past the half-hour mark.

But in those 31 minutes, the Council managed to decide some interesting items, not the least of which was making just one end-of-year transfer of appropriations to close out the 2020 budget.

The Council unanimously agreed to Resolution 2020-13, empowering City Clerk-Treasurer Lynda Dunbar to move $74,500 from the Public Safety LIT fund to Fire Equipment Repair in the 2020 budget.

That transfer allows the city to fund replacement of the heating and air conditioning system at the Greencastle Fire Department.

“We went from a big, clunky system to one that can be repaired locally,” Mayor Bill Dory noted.

“This is the first time since the fire station was built (1978 or 1979) that the system’s been replaced,” Dory continued, “so we got our money’s worth.”

The fire department was also integral to adoption of Ordinance 2020-17 on second and final reading, amending the schedule of reserved parking spaces in the city.

The ordinance switches the two on-street spots reserved for firefighters from along South Indiana Street -- where they were adjacent to the parking lot that is now home to Breadworks -- to along Poplar Street, just to the south of GFD.

Meanwhile, the Council -- particularly Council President Mark Hammer decked out in his Christmas suit, which is an annual custom -- also offered praise for Brad Phillips and the Department of Public Works for their efforts on leaf removal this fall.

Phillips noted that his city crews picked up 840 cubic yards of compacted leaves, which is 350 to 370 more than a year ago. Leaf efforts included two pickup trucks driving a total of 1,895 miles, using 143 gallons of gasoline and 275 gallons of diesel fuel in the collection process.

Councilors also praised the 30,000-light Robe-Ann Park illumination in a project in which the Greencastle Civic League and other volunteers partnered with the Park Department.

Veronica Pejril called it “a gorgeous presentation not to be missed,” urging everyone to drive through Robe-Ann Park.

Fellow Councilor Stacie Langdon suggested that the park lights “hopefully become something of a tradition every year now.”

Park Director Rod Weinschenk noted that the lights are left on overnight and shut off in the morning so that those who work nights might be able to enjoy them as well.

In other business, the City Council:

-- Adopted Ordinance 2020-15 on second and final reading, amending portions of the city employee handbook relating to sick leave provisions and compensatory time off.

-- Heard Weinschenk report that the Park Department has been able to conduct some programs, including the sold-out Breakfast with the Grinch event staged Saturday at Rhonda and Chris Brotherton’s new Owl Ridge Wedding and Event Center. Masks and social distancing were stressed and temperatures taken on all attendees with the program getting approval from the Board of Works.

-- Heard Mayor Dory report that City Hall is closed to general traffic but offices are available by phone and email, as well as the utility office maintaining the drive-through window.

-- Heard the mayor note that OCRA is opening up a potential third round of COVID-related funding. City officials will look into applying after the first of the year. Dory also said he would be meeting with County Commissioner Rick Woodall this week to coordinate efforts to see if the community couldn’t get the maximum $500,000 grant. No match is required on the funds.

-- Heard Dory report that efforts continue on the YMCA/community center project on both the agreement with the Wabash Valley YMCA and site plans and site arrangement at the proposed location just east of the Walmart store, obtained from the Ballard family.

The next regular session of the City Council is set for 7 p.m. Thursday, Jan. 14 at City Hall.