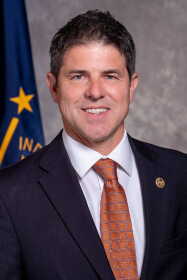 Though Indiana is usually considered a tradition-minded state, we Hoosiers have made a name for ourselves as national leaders for innovative public policies in the 21st century.

On issues from job training to school choice to road funding, Indiana has enacted policies that became blueprints for other states.

At the end of 2020, Indiana put another notch in our belt as we saw the federal government follow our lead in enacting a slate of health care price transparency policies that our state had already enacted earlier in the year. The goal of these laws is to drive down the cost of care through the power of supply and demand, which has been sorely lacking in the health care industry.

Previously, most of us found it nearly impossible to figure out how much a medical procedure was going to cost us ahead of time. If we as patients can find out the cost of a procedure in advance, it gives us the power to shop around and force doctors to compete with each other based on price.

There are four major policies on this front that Indiana adopted in March 2020, and that the federal government later took up in the December stimulus law passed by Congress and signed by President Trump.

First, Indiana required insurance companies to give patients a good-faith advance estimate of the cost of a scheduled health care procedure. This same policy – with some minor differences in the details – was subsequently passed at the federal level.

Second, Indiana passed a law to begin creating a state-level all-payer claims database, or APCD. An APCD is a price-comparison website for health care services – like Expedia or Hotels.com – for doctors and hospitals. With more and more states pursuing this policy, the new federal law includes funding to help states pay the costs of building their own APCDs.

Third, Indiana enacted a ban on “gag clauses” in health insurance contracts, and Congress followed suit in December. These gag clauses prevented employers from finding out the cost of services under their own employee insurance plans, putting businesses at a huge disadvantage in negotiating cheaper insurance rates for their employees.

Fourth, Indiana sought to end the problem of “surprise billing” for scheduled services. Patients get a surprise bill when they go to a hospital or other facility that’s in their insurance plan’s network, but they’re treated by an independent doctor who’s out of their network. Indiana’s law prohibits doctors in this scenario from charging the patient more than their insurance will cover, unless the patient is notified of the higher cost ahead of time and still agrees to receive the service.

While the new federal law differs from Indiana’s surprise-billing law in some key ways, the fact that Congress took the time to wrestle with the issue shows what a major pocketbook issue this is for American families.

Once again, the policies adopted in Indiana are being taken up by other states and the federal government. These market-driven health care reforms will not fix the health care industry overnight, and the General Assembly needs to continue working on this issue to make sure the laws we have passed are working. But over time, these policies will drive down costs by helping all of us as patients find the best deal when we need a procedure.

Rodric Bray (R-Martinsville) was elected to serve as the state senator of District 37 in 2012. District 37 encompasses the southern part of Putnam County and includes Greencastle south of Washington Street.

Bray chairs the Rules and Legislative Procedure Committee and is the president pro tempore of the Indiana Senate. He previously served on the Judiciary, Civil Law, Corrections and Criminal Law committees.